Steve Wright: "The Political: Some Experiences from the Italian Operaismo of the 1960s and 1970s"

This talk will critically examine debates around ‘the political’ amongst the Italian workerists. While championing new understandings of class composition that challenged the traditional leninist separation of economic and political struggles, the workerists of the 1960s and 1970s nonetheless struggled to formulate an agreed approach to theorising and practicing ‘the political’. The talk will seek to explore the ways in which this tension played itself out, from early debates concerning the traditional institutions of the workers movement, to efforts to develop organizational projects outside the existing parties and unions. Along the way, attention will also be paid to the contributions of those (such as the editors of Collegamenti and Le operaie della casa) who, despite the incisiveness of many of their contributions, found themselves situated largely on the margins of the workerists’ debates as these unfolded at the time.

Steve Wright teaches in the Faculty of Information Technology, Monash University, and is the author of Storming Heaven: Class Composition and Struggle in Italian Autonomist Marxism (Pluto Press, 2002). His current research is focussed on the creation and use of documents amongst the Italian workerists of the 1960s and 1970s.

PRESENTATION SLIDES:
“The Political:  Some Experiences from the   Italian Operaismo of the 1960s & 1970s” 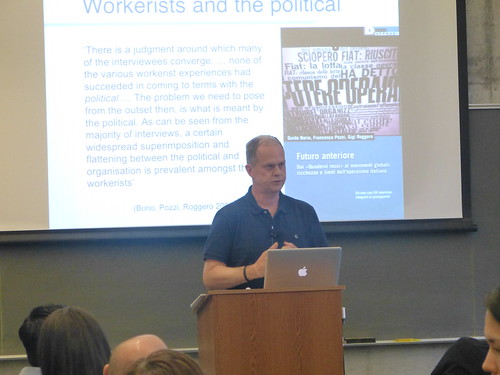