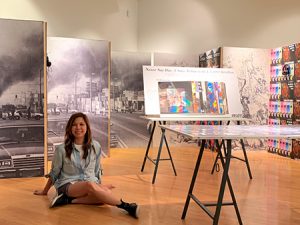 Jacqueline Barrios is using the Dickens novel Barnaby Rudge to explore the impact and history of the Los Angeles riots of 1992 with her high school students from South LA.

The Dickens Project at UC Santa Cruz is the largest multi-campus consortium on Victorian Studies in the world. Each summer it presents Dickens Universe, a week of intense study, focused on one of Dickens’ novels. This year the summer program focuses on a lesser known book of Dickens’, Barnaby Rudge, and features an exhibit of works by South LA high school seniors that uses Barnaby Rudge to explore the impact and history of the Los Angeles riots of 1992.

Scott Rappaport details the exhibit and the wider, week-long intensive for UCSC News:

“2019 marks the 39th year of the popular annual gathering, which takes place the week of July 14-20, and the featured book this year is one of Dickens lesser-known works, Barnaby Rudge.

Set in 18th-century London, the novel tells a powerful story of public violence and private horror. It depicts the 1780 anti-Catholic riots that have been described by historians as the largest, deadliest and most protracted urban uprisings in British history.

John Jordan, director and co-founder of the Dickens Project explained why this particular book was selected as the featured novel this year.

Barnaby Rudge is seldom read in part because it is a historical novel, set in the 18th century, that deals with a relatively obscure event–the Gordon riots of 1780,” said Jordan. “Those riots were a major event of lawlessness, fomented by strong anti-Catholic feeling that culminated in five days of reckless destruction of life and property across London.”

“We felt it was time to revisit this strange, neglected novel to see what it might have to offer to a new generation of readers. It turns out that Rudge has surprising and suggestive parallels with events in our own times, including the rise of nationalism and the violent treatment of foreigners.”

One of the highlights at this year’s Dickens Universe will be a featured exhibit related to the novel that is coming to the campus from Los Angeles along with a contingent of students and their teacher, Jacqueline Barrios. A graduate student in English at UCLA, Barrios is using Dickens’ novel to explore the impact and history of the Los Angeles riots of 1992 with her high school students from South LA at the James A. Foshay Learning Center.

The exhibit is the culmination of extensive study of Dickens’ Barnaby Rudge by the high school seniors in their AP English Literature class taught by Barrios through her “Lit Labs.”  With support from a partnership with the Dickens Project, Barrios brings in experts from a variety of disciplines to teach her students the featured Dickens Universe book of the year—in ways that they can relate to.

Barrios’s students are scholars with USC’s Neighborhood Academic Initiative (NAI), a college pathway program targeted at preparing first-generation students for higher education. NAI partners with the Dickens Project to support the Lit Lab projects, utilizing new teaching techniques to close the gap between their modern urban experience and the historical world of Dickens.

“For this year’s project, I knew they were going to read Barnaby Rudge,” said Barrios. “The energy comes from Dickens telling stories of the city’s urban uprising. I couldn’t really teach that in South LA without addressing the 1992 LA riots and addressing the history of LA urban riots.””

Read more about this year’s Dickens Universe at UCSC News.