As the COVID-19 pandemic in the United States emerged in full force during the spring of 2020, the intellectual landscape of the Humanities was characterized by uncertainty. What would it mean to continue pursuing the sorts of questions these fields take up without the face-to-face engagement which have traditionally been so foundational to them? As scholars, artists, and intellectuals in Santa Cruz approached the end of the last academic year, however, it was clear that the emergence of a global pandemic and the flaming of political tensions in the United States had only underscored the importance of the Humanities in making sense of the world around us. 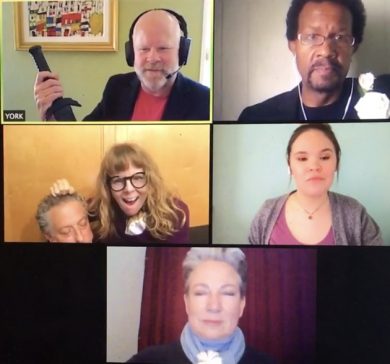 In response to this, UC Santa Cruz Shakespeare Workshop, The Humanities Institute, and the Office of Special Events joined forces with Santa Cruz Shakespeare to create Undiscovered Shakespeare: The Wars of the Roses. This series, consisting of eleven weekly episodes performed over the course of the summer, represented a bold and original venture into theater and public scholarship in the age of COVID-19.

Faced with the prospect of the first summer without performances of Shakespeare’s works in Santa Cruz in nearly four decades, Sean Keilen, Professor of Literature and Director of Shakespeare Workshop, and Mike Ryan, the Artistic Director at Santa Cruz Shakespeare, resolved to do something together that would fill that void and bring the community together. “I believe that great public universities should be great cultural institutions,” Keilen said when asked about the program, “and Mike Ryan believes that education is an important part of a great theater company’s mission.”

Santa Cruz Shakespeare won a coveted NEH “Exploring the Human Endeavor” Grant to support the project. Shakespeare Workshop supplied the scholars, while The Humanities Institute and Office of Special Events provided the Zoom webinar platform, advertising, and endless technical support behind the scenes.

Keilen and Ryan decided to expand Weekend with Shakespeare, a program that normally takes place over two days, into a deep encounter with four of Shakespeare’s earliest, and rarely performed, plays: Henry VI (Parts One, Two and Three) and Richard III, known collectively as the First Tetralogy. A series of broadcasts divided these four plays into ten weekly episodes on Zoom, each one featuring a live virtual reading (complete with costumes, props, and Zoom-inspired stagecraft) and a discussion with visiting scholars, directors, cast, and crew. Santa Cruz Shakespeare won a coveted NEH “Exploring the Human Endeavor” Grant to support the project. Shakespeare Workshop supplied the scholars, while The Humanities Institute and Office of Special Events provided the Zoom webinar platform, advertising, and endless technical support behind the scenes. “This project was the brainchild of a pandemic,” Keilen said, “and it had many midwives. I have never known such a complex collaboration between scholarly and creative institutions to work so well or serve the public better in a time of great need. And I am proud of the Humanities Division for embracing the challenge, when it would have been easier to do nothing at all.”

The complexity of creating Undiscovered Shakespeare, and the unique nature of its format, highlighted how important the contributions of dramaturgs are in producing programming which takes on Shakespeare’s historical works. Dramaturgs act as literary and historical advisors to the rest of the production team, contributing their academic expertise to shed light on crucial dimensions of the plays they work on. “When the festival was founded back in 1981 on the UCSC campus,” remarks Mike Ryan, “it bridged scholarship and performance in Shakespeare’s work, and this principle is at the core of what we do.” This summer’s production was no exception, and all four dramaturgs who contributed to Undiscovered Shakespeare are graduates or current students of the doctoral program in Literature at UC Santa Cruz: Ariane Helou, Maria Frangos, Amani Liggett, and Ashley Herum. 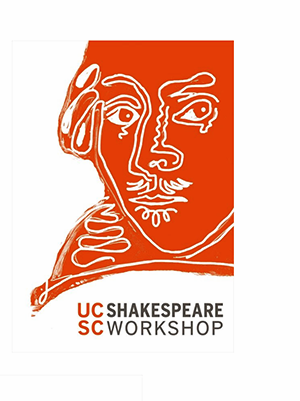 Ariane Helou, who served as the lead dramaturg for the first play and herself performed in Richard III, noted how the production team pulled together to face the challenges presented in performing within this new medium. “It was a real delight to learn collectively how we could make the most of online-only theater, and to see that continue to evolve over the ten ‘episodes’ of the series,” said Helou. Taking on the position of dramaturg after Helou was Maria Frangos,  who noted the generative role working on the production in this capacity had for her creative and intellectual growth. Frangos said that “you learn so much with each dramaturgical job, because each director you work with is different, you learn so much from each member of the cast, watching them work, watching everyone’s imagination work.”

Ashley Herum (who worked on Henry VI, Part III) noted how the experience of working on this particular production required a thoughtful approach to dramaturgy that would render the play both enriching and accessible to a diverse audience. “As a scholar, I benefited from the challenge to write about the play in a manner that was both sound from a scholarly standpoint and clear and approachable to a public audience.” This was quite an accomplishment, given that the audience of Undiscovered Shakespeare “ranged from scholars, to lovers of reading, to theater enthusiasts, to Shakespeare devotees, to Santa Cruz Shakespeare friends and supporters, and any combination of those things. It was very gratifying to know that my work was reaching such a large number of people and—I hope—adding to their enjoyment of the production.”

Collaborations with Santa Cruz Shakespeare are unique opportunities to introduce graduate students in Literature to careers paths that lead beyond the university, while also enriching their research and teaching. They are, in fact, one of the best reasons to study Shakespeare on our campus rather than another one.

The experience of applying literary and historical expertise to a public-facing production is a critical part of the work that both Santa Cruz Shakespeare and the Shakespeare Workshop seek to do. Keilen said that “collaborations with Santa Cruz Shakespeare are unique opportunities to introduce graduate students in Literature to careers paths that lead beyond the university, while also enriching their research and teaching. They are, in fact, one of the best reasons to study Shakespeare on our campus rather than another one. I don’t know of another Literature or English Department on the west coast that has a long-standing partnership with a professional theater company that focuses on Shakespeare.” Mike Ryan also underscored the importance of this relationship. “Santa Cruz Shakespeare has always hired and worked closely with dramaturgs on its Shakespeare productions,” said Ryan. “We believe that both the textual and contextual support they provide are essential for an actor’s clarity of thought and intention, the clearer the actor’s thought and intention, of course, the easier and more dynamic Shakespeare’s language becomes for the audience’s ear.”

The experience of putting on Undiscovered Shakespeare left both the production team and the audience optimistic about the future, even as we face the ongoing challenges and opportunities of virtual programming in the public Humanities. “There is hope that this kind of work has a future in Santa Cruz,” remarks Michael Warren, Textual Consultant and Head of Dramaturgy for Santa Cruz Shakespeare. Over the course of the year to come, and as virtual programming continues to be a fixture in our lives, THI will be doing its part to make sure that the Humanities continues to play a key role in bolstering a vibrant discourse at UC Santa Cruz, throughout the Santa Cruz community, and beyond.