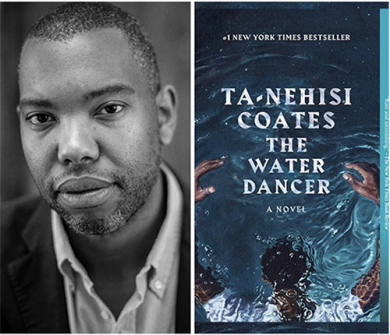 Ta-Nehisi Coates, the celebrated journalist and bestselling novelist, had a special post-election conversation with Atlantic staff writer Adam Serwer on Friday. This event was presented by The Humanities Institute at UC Santa Cruz, is partnership with Bookshop Santa Cruz and Marcus Bookstores in Oakland.

Journalist and bestselling novelist Ta-Nehisi Coates has some cautionary words for those who believe that President Donald Trump and Trumpism are bound to fade away in a post-election haze.

Last Friday, Coates, in a live conversation hosted by The Humanities Institute at UC Santa Cruz, in partnership with Bookshop Santa Cruz and Marcus Bookstoresin Oakland, referenced a remark by President-elect Joe Biden, predicting a break in Trump Fever and an “epiphany  … among many of my Republican friends.”

“I really hope he doesn’t believe it, because it’s not going to happen,” Coates said in front of a Zoom audience of 1,200, including 500 UC Santa Cruz students, who received free admission and complimentary paperback copies of Coates’s bestselling 2019 novel, The Water Dancer.

“A poll says 70 percent of Republicans think something crooked happened [in the presidential election],” Coates continued. “There’s a market for crazy. And if there’s a market, why would the fever break?”

Though the subject matter was often fraught, Coates, wearing a stubbled quarantine beard and a gray hooded sweatshirt honoring the late Cuban boxing legend Kid Chocolate, allayed some of the tension with his informal manner and booming laugh.

Coates, a National Book Award and MacArthur “genius” award honoree, made a name for himself as a fearless journalist and essayist who intenstified and deepened the national conversation about racism in essays including his detailed case for reparations for the horrors of slavery and its legacy in the Atlantic.

Lately he’s had a lot to say about Biden’s victory over Donald Trump, and Trump’s attempt to subvert the results by making false accusations of large-scale voting fraud.

Coates chalked it up to racism and attempted disenfranchisement.

“People are not fooled by who voted for Biden,” Coates said, remarking on the large number of African American residents of Philadelphia, Detroit, Pittsburgh, and Atlanta who turned out for Biden, only to endure the public spectacle of a defeated candidate trying to undo the results. Coates tied Trump’s efforts to a broader attempt to delegitimize and destroy the voting rights of Black people in the United States.

“You can pick your term,’’ he said. “I would say they’re trying to erase Black people out of the body politic. Others would prefer the term ‘coup.’’’

The enduring legacy of slavery

At first glance, the fictional flourishes of The Water Dancer may seem like departures for Coates, who amassed a large readership during his time as national correspondent at the Atlantic, where he wrote about cultural, social, and political issues, particularly regarding African Americans and white supremacy.

In 2015, Coates won the National Book Award for Between the World and Me, a letter to his then 14-year-old son in which he warned about the perils of being African American. It was highly praised by the late award-winning novelist Toni Morrison, who observed, “I’ve been wondering who might fill the intellectual void that plagued me after James Baldwin died … clearly it is Ta-Nehisi Coates.” In 2018 the book was adapted and staged at the Apollo Theater, and this year HBO produced a special based on that 2018 staging.

He is also the author of the memoir The Beautiful Struggle, and We Were Eight Years in Power, a collection of essays about the intense, divided, and emotional response to Barack Obama becoming the country’s first Black president.

But Coates’s Zoom talk with Atlantic magazine staff writer Adam Serwer about  The Water Dancer was a continuation of his past explorations of racism in America, not a digression from it.

The Water Dancer revisits the familiar subject of racism with a magical flourish, finding a new portal into the material, a technique that will be familiar to admirers of Colson Whitehead’s The Underground Railroad, in which an actual subterranean railroad transports escaping slaves.

The novel tells the story of Hiram, a slave who struggles to harness and use a mysterious superpower to help others gain their freedom. The novel is filled with contemporary echoes, with dialogues and events that could have taken place in the 19th century or this year. The book is much more than a gaze toward the past. It also channels history as a way to make sense of the present.

Serwer asked Coates about the vastly different circumstances of two siblings at the center of the story—Hiram, who is half African American and half white, and born into slavery, and Maynard, who is a privileged white man and an arrogant fool. Coates noted that most of the violence of slavery took the form of intrafamilial violence—including sexual violence; Hiram himself is the result of a coercive relationship between a Black woman and a white slaveholder.

Hiram has a remarkable power called “Conduction,” enabling him to transport himself  and others from one place to the other. But he is also constrained by his inability to remember a central event that is most essential to his life.

The protagonist’s defining strengths and weaknesses have real-life antecedents. Coates referenced the remarkable life of abolitionist and political activist Harriet Tubman, who received such a savage beating that she had blackouts throughout her life.

“At any given moment she could faint into a coma,” Coates said. And yet she led scores of enslaved African Americans to freedom.

“I think about my mom, who has light brown skin. Her grandmother was very, very fair. She would ask her family, ‘Where are the white folks in this family?’ and they’d say, ‘Why do you want to know about that?’

“We have a history of not wanting to remember certain things,” Coates said. “The country as a whole is imprisoned by its desire not to remember, an inability to face it.”

The event was part of The Humanities Institute’s event series focusing on memory, and examining questions such as “What can memory tell us about the past, present, and future, and why are certain moments remembered while others are silenced and left out?”