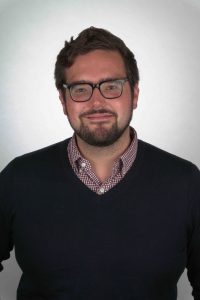 Aaron Aruck first became interested in researching the role that sexuality plays in policing the border between the United States and Mexico when he was working as a legal assistant with the National Center for Lesbian Rights.

“I originally started my research project with a focused interest in the way that immigration systems in both the United States and Mexico had historically constructed homosexuality through their immigration processes,” the fourth year PhD student in the Department of History recalled.

Then he was awarded a Social Science Research Council Dissertation Proposal Development fellowship through The Humanities Institute. UCSC is one of only five universities nationwide to take part in this innovative program. Through this initiative, students receive interdisciplinary training in support of writing their dissertation proposals and funding to conduct exploratory pre-dissertation research.

As a member of the inaugural cohort, Aruck attended two workshops conducted by SSRC that connected him with faculty and peers from across the country. The training was valuable, but, as Aruck noted, the summer research funds proved crucial: “With this exploratory research grant I was able to go to various archives that I probably wouldn’t have gone to if I had kept operating in this singular pursuit. For example, I went to the public health archive in Mexico City and that’s where I found a bunch of documents that folded together these three categories of sexuality: venereal disease, prostitution, and homosexuality. That got my thinking going that there was no singular formulation of homosexuality, instead, this formation process drew on older, existing forms of sexual policing that allowed homosexuality as a category to take shape.”

He adapted the parameters of his project to include these findings and developed a working title for his dissertation: Policing Sexuality and Migration at the U.S.-Mexico Border: Binational Efforts to Control Prostitution, Venereal Disease, and Homosexuality Across National Borders 1920-1965.

Aruck has continued to move the project forward, recognizing the urgency of making his research accessible for public audiences with the goal of affecting public policy. He was awarded a Humanities Without Walls Pre-Doctoral Summer Fellowship in 2017 that allowed him to think through these connections and focus on how his academic research could be applicable to a public-facing career “beyond the walls of the academy.” At the same time, the scholarly merit of Aruck’s work has been recognized by the SSRC with a 2018-2019 SSRC International Dissertation Research Fellowship. This award will support Aruck for a year of dissertation research in Mexico City and various cities along the U.S.-Mexico border.

Aruck’s success in securing these fellowships exemplifies a new way of building a scholarly portfolio. Humanities Without Walls helped Aruck enrich the context and broaden the intended audience for his historical research while continued support from SSRC enables rigorous primary source research. By building on these different kinds of professional development, Aruck has been able to envision how his own work “could have some type of influence on the way people think through the history of immigration and the policy implications of this long history of sexual policing as we think through the humanity of our immigration system today.”

Recently awarded a Public Fellowship by The Humanities Institute, Aruck will take the spirit of publicly-engaged research with him to Badge List this summer where he will expand his skills to include quantitative research and data visualization.  He hopes that by aligning quantitative data analysis with qualitative research he can more effectively “raise awareness around ways that American immigration policy affects sexual minorities historically and open up new ways of thinking about immigration that critiques what I see as a new era of tolerance in which the American immigration system is seen as embracing LGBT people in a very homonormative way.”