The lens of history allows us to assess the past, find meaning in the present, and plan the future. But history does not provide one tidy, unyielding viewpoint. Each scholar makes observations through a unique lens, to some degree defined by discipline, but often resulting in different narratives. 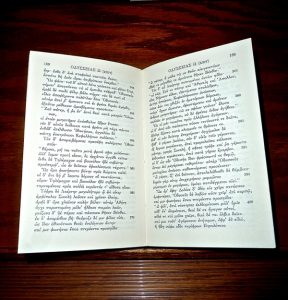 The ancient Greek texts that remain, such as this edition of Homer’s epic poem The Odyssey, exist in manuscripts with no pictures or illustrations. Bassi studies the objects mentioned in these texts for clues about ancient social and political structures. Credit: Leslie Willoughby.

For her lens, Karen Bassi, UC Santa Cruz professor of literature and classics and director of the Classical Studies Program, studies the works of ancient authors who wrote about their relation to the past and future. But Bassi also has an abiding interest in sorting through how historical perspectives differ, depending on whether researchers read texts or interpret artifacts.

A major division splits Bassi’s field of antiquities. Classicists identify either as philologists, like Bassi, and historians, who pore over ancient literature and history, or as archaeologists, who dig up artifacts. Although the texts and artifacts relate to one another, each approach employs different methodologies. Bassi posits that each approach conceptualizes their objects of study in different ways, often resulting in different interpretations.

“One of the things that makes Karen Bassi’s work exciting is that she studies not only the past, but also the way we construct the past as an object of study,” said Victoria Wohl, professor of classics at the University of Toronto. Like Bassi, she analyzes the literature and culture of ancient Greece. Wohl centers her attention on the social relations, political thought, and psychic life of democratic Athens.

We sat down with Bassi at UC Santa Cruz’s Cowell College to talk about the differences between using texts and artifacts to identify truths about the past, and how these differences may affect what we choose to believe.

Truth seems like a modern, useful thing. The word that gets translated as “truth” in Greek is alētheia. The “a” in the word negates what comes after it, as in a-moral. Lethe is the river of forgetfulness that you cross when you die. You forget your former life. This concept is in Plato and other writers: truth is the absence of forgetting. I think this also says that truth is a temporal concept. Truth builds on things that came before it, things you’ve not forgotten, as this word implies. Objects and texts help us remember. They give us access to the past. 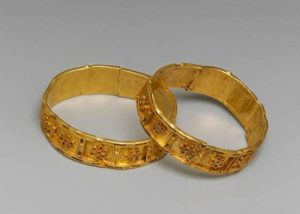 Bassi observes that archaeologists and museum specialists share the metaphor “read the object.” This reading, or interpretation, is limited by the distance between ourselves and the past. We may deduce what ancient objects, such as these Greek gold and cloisonné bracelets from the 5th century B.C.E., meant to their owners, and texts may deepen our understanding, but the distance remains. Credit: The Metropolitan Museum of Art, the Cesnola Collection, Purchased by subscription, 1874–76. CC0 1.0 Universal (CC0 1.0).

Questions may be the most powerful forms of speech. Especially the unanswerable ones: how do we determine the truth about the past? We have only traces of texts from antiquity. Statements we make about ancient Greece or Athens must be filtered through that lens of loss. My 2016 book, Traces of the Past: Classics between History and Archaeology, examines how ancient Greek authors wrote about objects in the world, the stories attached to those objects, and how those stories inform how we should think about the past. And that has ethical, political, and moral implications.

We’re having a relationship to the physical world now, in my office. What objects are around? What do they say about me? This is a way of thinking about political and social structures. Objects occupy different positions historically and politically, and in terms of their value, everyday as opposed to the exceptional.

How long ago are you talking about, and who are these authors? The fifth century B.C.E. Herodotus, for example, who is called the father of Western history, wrote about a kind of bowl. He uses a phrase when talking about such objects, “These are things that lasted up until my time.” The objects have a history that comes with them and he has seen them. But his texts come down to us through manuscripts, and the manuscripts don’t have pictures or illustrations.

I’m interested in factual statements about the past and how objects seem to make a true statement about an event. They seem to be evidence for that event, just as funerary monuments are evidence of people who lived in the past.

In the Greek language, the past tense of the verb meaning “to see” means to know. In the Western tradition, sight is prominent as the vehicle for knowing the world. To describe his method of working, for example, Herodotus uses the word autoptēs, which means self-sight, or eyewitness.

If a picture’s worth a thousand words, do objects outvalue text? It’s a matter of interpretation. Archaeologists who work on ancient Greek artifacts use a metaphor. When they talk about the objects they study, they say they “read the object.”

I’m reading text to see the object, and archaeologists see an object directly. But they want to be reading. In this case, reading means interpreting the object. And what is the aim of that interpretation? To get closer to the context in which the object was used.

Reading objects is also used as a metaphor in museum studies. But reading brings with it the notion that there’s a distance between ourselves and the object. We can have a plausible argument about artifacts and what they might have meant to the people who owned them. And texts can tell us some things about that. But there’s always going to be that distance.

How do these questions from the classics affect us here and now? The museum becomes another staging ground for thinking about these questions. When we look at objects in a museum, oftentimes they have historical significance. Somebody’s ancestors touched, manipulated, buried, or venerated them. What gets embodied in these objects that tells us something about our humanity, about our families? Somehow, they bring history with them.

I think about things that my mother left for me, for example, old jewelry that I never wear. There are your family heirlooms on one hand, and then there’s the museum end of that spectrum. What are we preserving when we put things in a museum, for what purpose? 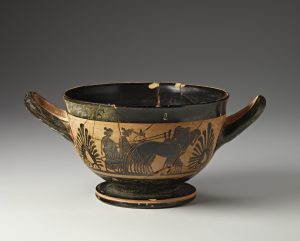 Bassi is codirecting a gathering of scholars this summer in Washington, D.C., to consider how museums showcase and interrogate the humanities using objects like this drinking cup c. 500 B.C.E. Credit: Iris & B. Gerald Cantor Center for Visual Arts at Stanford University; Gift of Catherine Harwood Dewey, in memory of Dr. Hazel D. Hansen, with permission.

This summer, I am codirecting an NEH Summer Institute, Museums: Humanities in the Public Sphere, in Washington, D.C. My codirector is Gretchen Henderson, a 2018 Tanner Fellow in environmental humanities at the University of Utah, a lecturer at Georgetown University, and a UCSC research associate. Participants will visit the National Museum of African American History and Culture, the National Museum of the American Indian, the United States Holocaust Memorial Museum, and the Freer-Sackler Museums of Asian Art.

One of our aims is to bring scholars together to think about how museums showcase and interrogate the humanities. For example, museum specialists will give workshops on digital humanities. There is software that allows you to look at an object on your computer screen and rotate it. But what is the difference between that and standing in front of the object itself? How do questions about what we mean by human life and human knowledge, and what we should be remembering, get filtered through these new digital platforms?

How does the meaning of objects inform your studies of death in Greek tragic texts? Objects are ephemeral, they come and go. Funerary monuments from ancient Greece may have inscriptions on them like, “She was the best wife.” They name the person, and they’ll have a sculptural image. You should see these! A child holds a pet bird. A mother reaches out to a baby being brought to her—did she die in childbirth? A husband gives his hand to his young wife. Why have the sculptor and family decided to make these images as though the dead are still living? The material world conveys to us the ephemerality of our lives and cultures.

This article by Leslie Willoughby was originally published in Inquiry @ UC Santa Cruz.