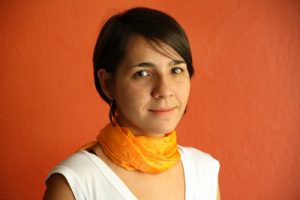 Filmmaker Marcela Zamora will discuss her work after the screening of her film “María en tierra de nadie.”

Human migration, borders, and notions of citizenship are at the heart of a series of events that help celebrate the 15th anniversary of the Department of Latin American and Latino studies at UC Santa Cruz, cosponsored by the Chicano Latino Research Center.

“This event celebrates our Quinceañera, our coming of age,” said Pat Zavella, chair of Latin American and Latino studies. “In the short time we have been a department we have grown to 215 majors, where 84 percent are first generation to attend college. We now have 10 ladder-rank faculty and several have won teaching awards.”

First of its kind

The series begins Alumni Weekend with a free public screening of the film “María en tierra de nadie / Maria in No Man’s Land” and a discussion with its director Marcela Zamora. It kicks off “Borders and Belonging: A Series of Events on Human Migration” presented by the Chicano Latino Research Center.

The film screening will begin at 7 p.m. Thursday, April 28 at the Rio Theatre. It is free and the public is invited; attendees are asked to register in advance.

The next day, Friday, April 29, will be “The Jungle and the Beast: A Conversation with Lewis Watts and Óscar Martínez” from 10 a.m.–noon at the Merrill Cultural Center on the UCSC campus. It, too, is free and open to the public with advance registration.

The events are also a lead-in to the Andrew W. Mellon Foundation Sawyer Seminar on non-citizenship that begins with “Rethinking Migration,” a two-day conference May 6 and 7. The conference will feature several visiting scholars and UCSC professors in the humanities and social sciences who will focus on issues surrounding migration.