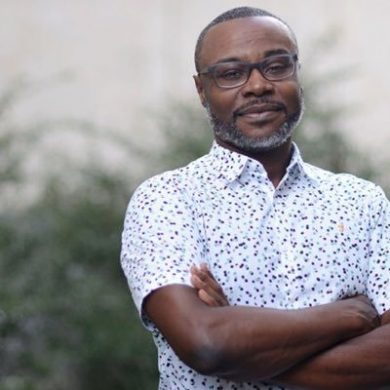 Students at UC Santa Cruz are now getting the opportunity to explore an area of study that’s never been offered on campus before—delving deeply into the realms of Black revolutionary history, Black social movements, Black cultural expression, and Black studies as a formation.

These topics are part of the campus’s new Black studies minor, which launched last fall in response to overwhelming demand from undergraduates across academic divisions.

The minor is offered through UC Santa Cruz’s Critical Race and Ethnic Studies program (CRES), a major under the Humanities Division.

Associate Professor of Feminist Studies Xavier Livermon is the first and, at this time, the only UC Santa Cruz faculty member hired to teach in the minor. Last fall, he launched the minor’s core class, Approaches to Black Studies. To round out its curriculum, the minor draws from courses from other departments.

Livermon comes to Santa Cruz from the University of Texas-Austin, where he was an associate professor of African and African diaspora studies. His research exists at the intersection of popular culture, gender, and sexuality in post-apartheid South Africa, encompassing African cultural studies, Black popular music, Black performance, Black queer studies, HIV/AIDS, and African diaspora studies.

UC Santa Cruz’s Black studies minor is an essential part of “preparing to be a citizen of the world,” Livermon said. “To reimagine the history of the United States without understanding the foundational role of Black people is to misremember history.”

In describing the goals of the minor, he referenced The 1619 Project, an ongoing New York Times initiative that “aims to reframe the country’s history by placing the consequences of slavery and the contributions of Black Americans at the very center of the United States national narrative.”

The Black studies minor has an interdisciplinary approach.

“Students will be exposed to sociology, geography, the arts, social sciences, education, and anthropology. I hope that students from across the institution will be able to have this minor,” Livermon said. “And, ideally, the prospect of a strong Black studies program will have a strong impact on student and faculty retention. That will attract more Black students, more students of color, more students who are interested in questions of social justice and how to remedy anti-Black racism.”

The prospect of being part of Black studies at UC Santa Cruz was one of the factors that drew him to the campus.

“It’s very exciting to be part of building something from the ground up,” Livermon said. “You don’t often get that opportunity. You usually end up inserting yourself into an existing program and make small changes here and there.

“UC Santa Cruz is an institution that has had a reputation for social and political awareness that hasn’t always extended to fields including Black studies,” he said. “We’re hoping to remedy that.”

He visualizes the minor as a necessary intermediate step toward establishing a Black studies major. This major will happen “if we can stabilize and build out this minor, if we can maintain strong student and faculty interest. It also depends on administrative support.”

Christine Hong, an associate professor of literature and the director of Critical Race and Ethnic Studies, said the launching of the minor last fall was a long overdue and necessary first step. She noted that there has been a call for Black curriculum dating back to the campus’s founding in the ’60s.

“I want to celebrate this, but at the same time it’s important to note that there is so much more work to do to fortify Black studies on campus,” Hong said. “Let us not forget that students have been calling not just for a minor but a Black studies major and potentially even a department. This is a stepping stone toward a larger goal, reflective of intense community organizing.”

Asked if the Black studies minor is a concept whose time has come, Hong clarified that the “time had come” for the program many years ago. Hong noted that a groundswell of support existed for the minor long before the May 25, 2020, police murder of George Floyd that instigated “a powerful mass movement …  against the lethality of anti-Black racism.”

In a statement published online in the summer of 2020, Hong referenced “the Afrikan/Black Student Alliance’s reclamation of Kerr Hall in Spring 2017, which paved the way for the Black Studies minor … [This] was part of a powerful grassroots arc, stretching back to 1968 when UC Santa Cruz students advocated for the establishment of Malcolm X College (now Oakes College) as a space dedicated to the study of the ‘Black experience.’ We also recognize the committed faculty who sacrificed their own research time and the dedicated staff who worked long hours to bring this minor into being.”

The Black Studies minor offers students grounding in the intellectual histories, political movements, cultural expressions, and critical theories of the Black diaspora, all while engaging a range of methodologies from across disciplines, Hong said.

“Attention to the significance of social justice is a hallmark of the minor,” Hong said. “Supported by faculty expertise in Africa, the Caribbean, the Americas, Europe, and the Pacific, students can explore the globally multi-sited nature of Black freedom struggles, both past and present, and examine blackness through a comparative lens.”

In preparing the case for the minor, CRES polled undergraduates across campus on their interest in Black studies last spring. Of nearly 200 respondents, 94% agreed or strongly agreed that UCSC would benefit from a Black studies minor, and 85% would be likely or very likely to take Black studies classes.

Hong said the survey, if it were held after the murder of Floyd, would have had an even more overwhelming response. She likened the upwelling of protests to “a moment when the dungeon is shaking and the chains are falling off.” And she mentioned that the minor was one of the demands made by students who reclaimed Kerr Hall in 2017.

The Black Student Union at UC Santa Cruz has described the critical importance of a Black studies minor as a strategic step toward “an intellectual hub on this campus that focuses on Blackness, Black Lives, and Black Lifeworlds.”

Students pushing for this minor have described, in detail, acts of racism and microaggression they have been subjected to and/or witnessed on campus. Those incidents, in addition to last year’s horrific acts of “anti-Blackness” racism and violence including the murder of Floyd, underscore the need for this minor, said Adonay Moreno (Kresge ’21, CRES major and former president of the Black Student Union.

“This is a very rich area of study,” said Moreno, who served as the unofficial liaison between the Black Student Union and CRES faculty to launch the minor. “Black students have been fighting for this for many years. I hope it will expand in terms of funding, faculty hires, and curriculum.”

Moreno also spoke of a lingering demand for a Black studies program “that will be sustained with the same amount of care, resources, and funding that other majors get on campus.”

Students may be interested in the activism of the Black Panthers and other groups, but a Black studies minor also provides a lens for them to delve into the legacies of other movements that are not as well known, including the Combahee River Collective, a Black feminist lesbian social collective that formed in Boston in 1974.

Moreno said the launching of this minor could improve the campus climate for Black students “because it will drive more students to apply and get in as well as transfer, so that’s a major part of it.” Moreno was drawn to UCSC because of the CRES program as well as the rich history of protest, including the Kerr Hall reclamation.

“This (minor) is also for students who aren’t Black, and who genuinely care to learn certain things that have been very harmful to the Black community,” Moreno said. “That is not necessarily the purpose of Black studies. It’s more of an area of Black research and study based on the love and preservation of Black life.”

Those who wish to learn more about the program can view a prospectus and summary of course offerings and read a detailed announcement and rationale for the minor.