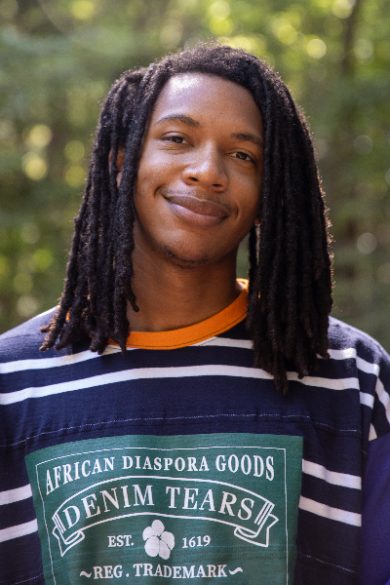 Chailen August’s time at UC Santa Cruz put him on a path of discovery that he never expected.

The Inglewood, Calif., resident, who will graduate with a minor in Black studies and a bachelor’s degree in critical race and ethnic studies this year, not only embarked on a study of drill rap—a type of hip-hop that originated in Chicago—and its interpretation in Ghana, Africa, but, as part of a prestigious study-abroad program, also had a visceral experience of what his enslaved ancestors may have endured.

Going to UC Santa Cruz “gave me a lane and a direction,” said August, 24, Stevenson College. “I knew going to a UC was a good decision, but I didn’t know all the opportunities I would have until I got there.”

He plans to take a gap year after graduation, then attend grad school the following year.

A first-generation college student, August grew up in a tough, sometimes violent, part of the city of Inglewood. But it was while he was attending high school in a nearby, predominately white town that he felt the pain of racism and prejudice firsthand. In high school, for example, a white student picked August’s photo out of the yearbook (August was the first Black student in the alphabetized list) and accused him of theft in order to deflect from the real perpetrator, August said. August protested his innocence but was handcuffed by police and taken to jail for six hours until his basketball coach confirmed August had been at practice when the theft occurred, he said. His experiences made him feel unsafe in much of America.

His classes at UC Santa Cruz gave him another perspective on what he’d lived.

“We talked about the oppression of brown and Black people,” he said, “and that was my actual, lived experience…. It [that study and exploration] added an academic view to my own experiences.”

It also allowed him to speak out about the racism he faced.

But it was his receipt of the U.S. Department of State’s respected Benjamin A. Gilman Scholarship that took him to the West African country of Ghana for the fall semester of his senior year. As part of his studies there, he toured Elmina Castle, a coastal compound where tens of thousands of Africans were held in horrible conditions before being shipped away as part of Portugal’s slave trade. The visit to the stone-walled fortress with doorways so small a person had to crouch to get through them, shook August, whose own family had been brought illegally to the United States at some point.

“All I could think about was the ancestors who had died there [in Elmina] or in that ocean, or made it across the ocean on that journey,” said August, who was both a Koret Undergraduate Research Scholar and Pathways to Research Scholar at UC Santa Cruz. Going to the beach later, August said, he was overcome by sadness, mixed with the knowledge of the progression that led him to where he was.

It was the most profound experience of his college years, he said.

Born into a musical family, he also used his time in Ghana to research how drill rap, which was known for its gritty lyrics about violence, guns, and misogyny, changed into a gentler version in Ghana. The music had the same beat, but the lyrics were much less violent. In graduate school, he hopes to focus on rap music and hip-hop scholarship with the goal of earning a doctorate and becoming a professor one day.

Because of the pandemic, August, a transfer student, only visited the UC Santa Cruz campus once. Still, he said, his college experience “was life-changing in a lot of ways.”

View a Global Learning “Who Am I Abroad?” video of August talking about his experiences in Ghana.