The Humanities Institute is happy to announce this year’s cohort of Coha-Gunderson Prize in Speculative Futures winners and honorable mentions. Every year, this competition celebrates mixed media work in speculative fiction from graduate and undergraduate students across campus. It was established by THI’s Speculatively Scientific Fictions of the Future research cluster and made possible by alumni Peter Coha (Kresge ’78, Mathematics) and James Gunderson (Rachel Carson ’77, Philosophy, and UCSC Foundation Board Trustee). This year’s awardees are drawn from Art, Ecology and Evolutionary Biology, Film and Digital Media, Games and Playable Media, and Literature. Carla Freccero, PI of the cluster: “This year in particular, the winners and honorable mentions in the prize competition exemplify the efforts of the cluster to bring the sciences, social sciences, arts, and humanities together to imaginatively conceptualize creative meditations on the future while addressing critical concerns of the present.” The 2022 selection committee awarded two graduate winners and one undergraduate winner, along with an honorable mention in each category. 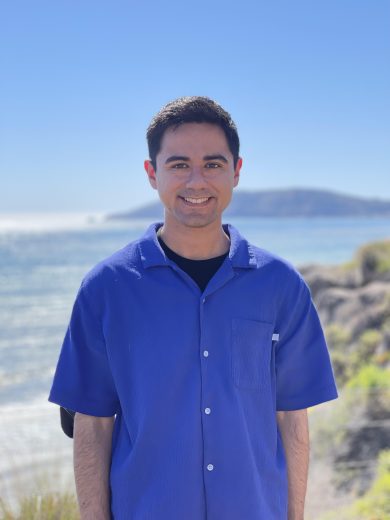 Franco submitted a poetry collection that, as they explain, “traces my perception of my father’s experiences as an immigrant farm worker from Mexico in California’s Central Valley.” The poems, they continue, “use translation, definition, and the U.S. education system as lenses through which to theorize how immigrant laborers are erased from the future.” One poem, for example, includes “screenshots from Google Translate, through which I display the inability to translate my father’s profession from Spanish to English.” Through these poems, Franco aims “to unravel the fact that many of those who suffer at the hands of these systems share many of the same visions for the future.” Ultimately, they hope their project “will help cultivate a community with shared values that nonetheless upholds individuality through common respect and admiration.” The selection committee found Franco’s project compelling in its translation of a set of personal and collective issues into a series of bilingual poems that deals with the critical situation of immigrant and migrant farmworkers in California, mixing lyric, epistolary, and internet forms as it begins to point toward different possible political futures shaped by labor organizing, Big Tech and Big Ag.” 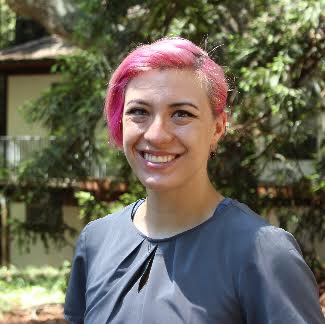 Rickards submitted two watercolors of the Cordyceps fungus with accompanying descriptions that, for her, “imagines what a Cordyceps invasion on the animals native to Santa Cruz would accurately look like.” Rickards plans to continue to work on the project, explaining that she would like to “add more local Santa Cruz wildlife to the illustrations, such as coyotes, turkeys, and seagulls” to give a fuller visual sense of the potential consequences of such an invasion and “expand the writing to be a field journal of a disease ecologist as she documents an encroaching Cordyceps invasion.” The selection committee was struck by the haunting beauty of Rickards’s watercolor illustrations depicting the invasive Cordyceps fungus with its fruiting bodies breaking through its hosts’ bodies. The descriptions, mimicking the field notes of a disease ecologist, cleverly and accurately describe this imagined infestation. Although the infestation in question is fanciful, the committee found that the project raises interesting questions for ecological futures and disease ecology.

Andreasen submitted an interactive fiction game that he describes as “an online choose-your-own-adventure mystery” that “rather than follow a protagonist as he solves the crime” leaves the mystery “up to the player to piece together.” Talos Machine, Adreasen continues, “takes place in the distant future, after the creation of a technological singularity has radically altered life in the solar system. The player is tasked with investigating the death of the last Homo sapiens. To do this, they must learn about the world of the future through a website called Omnipedia. Knowledge about this world will help the player discover the central mystery and eventually learn they’re in a story much greater than the death of a single human.” The selection committee admired the creativity of this interactive murder mystery that required the skills and talents of its players to solve the crime. The investigation leads players through a future world of hyper-intelligent machines and augmented biological minds, where civilization spans the solar system and history can be simulated on a subatomic scale. They were impressed by both the breadth of Andreasen’s vision and his skillful interweaving of the components into a coherent and clever story.

The winners of the Coha / Gunderson Prize in Speculative Futures will have the opportunity to further develop their submissions with members of the Speculatively Scientific Fictions of the Future cluster and present their projects to the public, whether through an exhibition, a performance, or future publication. We look forward to sharing more about these creative pieces!

Celebrate the winners of the Coha / Gunderson Prize in Speculative Futures and other student and faculty achievements at the annual Humanities Spring Awards on June 3rd, 2022, at 5:30 p.m. RSVP required.