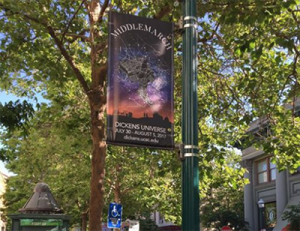 The Dickens Universe combines elements of a research symposium, arts festival, book club, and summer camp all rolled into one big, unforgettable week of intellectual celebration.

It brings together a wide array of participants including international scholars, college faculty, high school teachers, students, and members of the general public for a week of study and socializing at the UCSC campus.

The Dickens Universe is the signature event of The Dickens Project, a scholarly consortium headquartered at UC Santa Cruz that consists of members from different universities across the United States and around the globe. It is internationally recognized as the premier center for Dickens studies in the world and is one of the leading sites for research on 19th-century British culture.

“The Project continues to grow in membership–now 47 colleges and universities that range from Israel to Australia and include ones in Canada and the U.K., said John Jordan, director and co-founder of the Dickens Project. “Attendance remains strong and this year we had a larger number of faculty than ever before.” 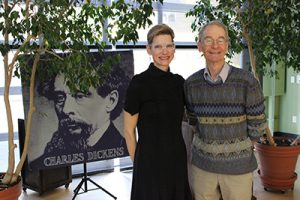 John Jordan, director and co-founder of the Dickens Project, shown with new UC Santa Cruz Campus Provost and Executive Vice Chancellor Marlene Tromp, who had previously attended the Dickens Universe as a faculty representative from Arizona State, where she taught before, but now comes in her capacity as a professor of literature at UC Santa Cruz. (Photo by Sarah Caldwell)

“What attracts people is the high quality of the program–lectures by world class scholars along with many opportunities for small group discussion,” Jordan noted. “And issues raised by Victorian novels remain pertinent today, such as social reform, class, gender, marriage, personal relationships, and personal ethics.”

The Dickens Universe always offers a week of total immersion in the world of Victorian fiction, usually focused on a novel by Charles Dickens. But this year marked the first time a work by Dickens was not featured. Instead, the spotlight was on Middlemarch by George Eliot.