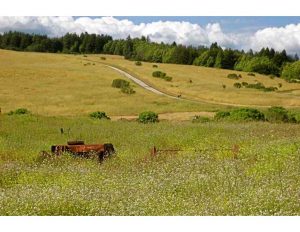 In the Ecotone: The UC Santa Cruz Campus is a new book by emeritus humanities profesor Jim Clifford that reflects on the campus as an extraordinary architectural and ecological site.

More than 50 color photographs are accompanied by essays that, as Clifford puts it, “search for an ecological language and an aesthetic that can do justice to the site’s complexity.”

The photographs are all taken between 2001 and 2015, while the text tracks UCSC’s experiment with environmental design from it’s very inception, follows it through changing times, and contemplates its continued significance.

Clifford described how the project came about.

“I wanted an outlet for my growing archive of photographs. And I thought we needed more strong images of the place,” he said. “After Ansel Adams’s black and white photos from the ‘60s, there isn’t much that’s easily available — just some postcards (all taken when the sun is shining).”

“The color images show familiar and unusual perspectives — the campus in different lights, in fog, the underside of bridges, trees that seem to invade the buildings, shots up close and distant out across the great bay.