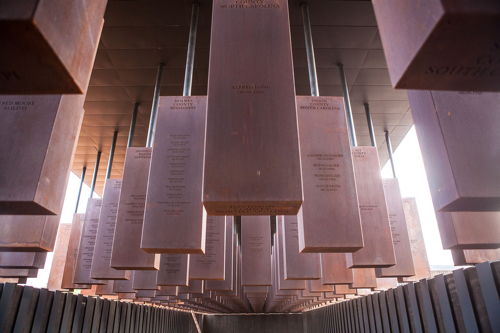 The Memorial Corridor at the National Memorial for Peace and Justice, which is the nation’s first memorial “dedicated to the legacy of enslaved Black people, people terrorized by lynching, African Americans humiliated by racial segregation and Jim Crow, and people of color burdened with contemporary presumptions of guilt and police violence.” (Photo from Wikimedia Commons by Soniakapadia, CC BY-SA 4.0).

In September 2020, California became the first state in the country to adopt a law that established a task force to study and develop proposals for potential reparations to descendants of those impacted by slavery. The task force is one of the subjects that will be discussed during the upcoming event, “Reparations for Black Americans: The Road to Racial Equality in California and Beyond,” hosted by the Institute for Social Transformation at UC Santa Cruz.

The April 15 discussion will convene leading experts and advocates of reparations, including William A. Darity Jr. and A. Kirsten Mullen, co-authors of “From Here to Equality: Reparations for Black Americans in the Twenty-First Century”; Anne Price, President of the Insight Center for Community Economic Development; and Congresswoman Barbara Lee, U.S. Representative for California’s 13th congressional district. The event is moderated by Chris Benner, Director of the Institute for Social Transformation at UC Santa Cruz.

Although the movement for reparations extends back to the 18th century, it has gained momentum in recent years, especially after the national protests against racial injustice last summer. U.S. Rep. John Conyers (D-MI) first introduced legislation to create a national task force to study reparations in 1989. The current version of the federal bill, H.R. 40, has at least 169 co-sponsors in the House but has yet to achieve majority support.

The discussion will convene leading experts and advocates of reparations, including A. Kirsten Mullen and William A. Darity Jr., co-authors of “From Here to Equality: Reparations for Black Americans in the Twenty-First Century,” Congresswoman Barbara Lee, and Anne Price, president of the Insight Center for Community Economic Development. The discussion will be moderated by Chris Benner, Director of the Institute for Social Transformation at UC Santa Cruz.

“No one alive today is directly responsible for the slavery of the past, but our economic system is rooted in slavery. We won’t be able to fully address racial inequality in our society until we come to terms with that,” Benner said. “It’s not just about money. It’s about being honest with ourselves so that we can come to a full understanding about race and economic opportunity in our society.”

According to Benner, there are three steps to consider as part of the reparations process: the first two, acknowledging harm and making reparations, then provide the basis for moving forward beyond the harm done.

“White Americans must come to terms with that history, that slavery was fundamental to our entire country, not just in the South, and that its legacy persists to this day. It means giving up an illusion, and recognizing that this country was founded on a system of white supremacy and inhumanity and that this continues to undermine the ideals of liberty, equality, and democracy that we also espouse.”  Benner said. “The increased public interest and discussions about reparations in recent years is encouraging and a sign of progress. We hope that many will join us to discuss how the movement for reparations could help close the racial wealth gap and promote racial equality.”

In addition to the movement for state and national reparations for Black Americans, the event will discuss how reparations can help close the racial wealth gap and promote racial equality. Speakers Sandy Darity and Kirsten Mullen have done research on the aftermath of slavery when a promise made to provide former slaves with 40 acres in land grants went unmet. Darity and Mullen estimate that it will require $10-$12 trillion in federal expenditures to bring Black Americans’ economic assets up to their white counterparts.

Racial wealth inequity, which has been highlighted during the pandemic, has also been on speaker Anne Price’s mind.

“What we’re really seeing during the pandemic are inequities being laid bare that have existed for a long time,” said Price during a recent KSQD radio interview with Benner. “For many years, systems that really were not working on behalf of people of color, from our educational system to our healthcare system, to even our unemployment system, all have come home to roost. We’re seeing these inequities play out across these systems, and they’re interconnected. So it’s really magnifying the long-standing inequities that have been baked into these systems that are having devastating effects on people of color.”

The free online event is being co-sponsored by the Institute for Social Transformation, an intellectual hub at UC Santa Cruz that connects scholars, builds community collaborations, and hosts discussions about bold and innovative solutions to urgent social and environmental problems. The Center for Racial Justice and Office for Diversity, Equity, and Inclusion at UC Santa Cruz are the other co-sponsors.

Register for the event: https://bit.ly/3rFPdf2. A limited number of Darity and Mullen’s book, “From Here to Equality: Reparations for Black Americans in the Twenty-First Century,” is also available to event registrants (with priority given to UCSC students).