Game designer A.M. Darke frames powerful dialogue about the role of games in the shaping of power in contemporary digital culture, and beyond. What is at stake in self-representation, and our representations of our communities, through gaming. How are industry representations variously coded as racial, as gendered? How can aspiring game-makers intervene in their communities and social representations of them? A.M. Darke rejoins our series for the third time, pivoting from panelist to core/keynote lecturer. His lecture will take shape in two parts; the first an overview of his own work, and the second a primer on accessible platforms for game-making. 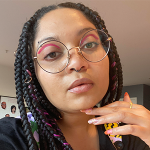 A.M. Darke is an artist, game designer, and activist designing games for social impact. He created the award-winning card game Objectif, which explores the intersection of race, gender, and standards of beauty. In 2016 he became an Oculus Launch Pad fellow, and shortly thereafter wrote An Open Letter to Oculus Founder, Palmer Luckey in response to reports of Luckey’s alt-right affiliations. The following year, he curated the exhibition Building Code: Developing Mixed Use Space in Virtual Reality as an artist-in-residence at Laboratory. In 2018, Darke joined the NYU Game Center Incubator residency, and is currently a Futurist in Residence with ARVR Women. Darke holds a B.A. in Design (’13) and an M.F.A. in Media Arts (’15), both from UCLA. He is an Assistant Professor of Games and Playable Media, and Digital Arts and New Media at UC Santa Cruz, and the founding director of The Other Lab, an interdisciplinary, intersectional feminist research lab for experimental games, XR, and new media. His work has been shown internationally and featured in a variety of publications, including Forbes, Kill Screen, The Creator’s Project, and NPR.

Media and Society is a series of lectures and public conversations on the role of media, journalism, popular culture narrative, and media representation, in the deployment of power in contemporary society.

Each series lasts a full academic year, but the fall quarter of the series is also a component of Kresge 1: Power and Representation, the core course at Kresge College. The series as a whole uniquely serves the UC Santa Cruz community in a vital function of the liberal arts: to cultivate dialogue in the context of public dialogue, and to guard our freedoms in expressing and debating that knowledge.