“When is a Boycott a Boycott? Lebanon, Palestine and Hollywood, and the Arrest of Ziad Doueiri”

This paper looks at the arrest and court case of Lebanese film director, Ziad Doueiri. Doueiri broke the 1955 Boycott Law by shooting a film in Israel, using Israeli and Palestinian actors. The film was then banned across the all the countries of the Arab League. Marcus argues that his case compelled the law to define the terms around which a cultural object should be subject to a boycott, and she investigates the intersections between old laws, new global movements, and state sovereignty. 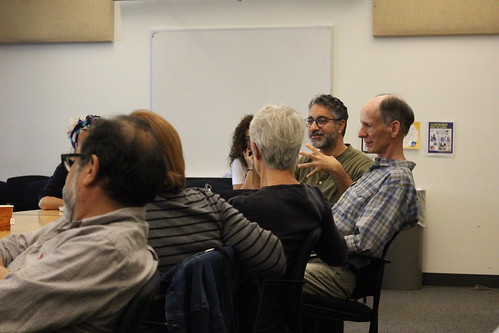 Elizabeth Marcus is a Mellon Fellow in the Scholars in the Humanities program at Stanford University and a British Academy Postdoctoral Fellow at the University of Leeds. She received her BA from the University of Oxford in Modern History and French, and completed her PhD in French and Comparative Literature at Columbia University in 2017. Elizabeth has taught in the Core Curriculum at Columbia University and at MIT as a Visiting Assistant Professor in the Global Studies and Languages Department. Her research focuses on the literatures as well as the intellectual and cultural history of the Francophone and Arab world with a particular interest in the relationship between language and cultural politics, intellectual networks, and migration in the afterlife of the French Empire. Her current manuscript, Difference and Dissidence: Cultural Politics and the End of Empire in Lebanon, 1943-1975, uncovers the response of local actors to the unique period of transition Lebanon at the end of the French mandate to the beginning of the civil war in 1975. During her time as a British Academy Fellow, she will start her second project, Paris and the Global University: International Students and Cultural Internationalism at the Cité Universitaire, 1945-1975, which looks at how the Cité internationale Universitaire, a residential campus in the Parisian outskirts, became a crucible of left and right-wing transnational political and cultural activism during the Trente Glorieuses (1945-1975).