The Dolores Huerta Research Center of America is proud to welcome and sponsor two talks by Natalia Barrera-Francis, an award-winning journalist and anti-racist activist from Lima, Perú. She will deliver two talks at UCSC on Nov. 1st  and 2nd, one in Spanish and one in English, respectively, to share her experiences as a youth activist and inspire the audience to take action against racism in Latin America. 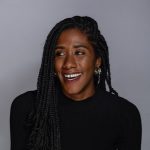 Natalia Barrera Francis is an Afro-Peruvian publicist, audiovisual producer, model and journalist. She has more than five years of experience creating content on social media, thanks to an antiracist audiovisual project called “Una Chica Afroperuana” (An Afro-Peruvian girl), in which she began documenting her experiences as a Black woman in Peru and addressing topics that affect Afro-Peruvian youth. “Una Chica Afroperuana” was the only digital space to have an Afro-Peruvian woman as content creator and protagonist, and the first to regularly produce content about racial themes in Peru. Some of her videos have received more than half a million visits and have been widely shared, generating constant interactions on digital platforms like Instagram, Facebook, and YouTube. Her work as a journalist began with the AJ+ documentary series, “Descoloniza” (Decolonize), a series that reflects on inequalities not only by highlighting colonial violence and racism, but that also aims to provide context and elevate the stories of people who are taking measures to challenge structural oppresion and historical erasure, as well as visions of the world that colonialism imposed on Latin America. Recently, her work has been recognized by brands such as H&M, Converse, Natura and in the last campaign of “Life Is Not a Spectator Sport” from Reebok Peru as well as organizations such as the United Nations, Black Woman Disrupt, and Lifetime, among others. Currently, she is finishing a bachelor’s degree in digital marketing.