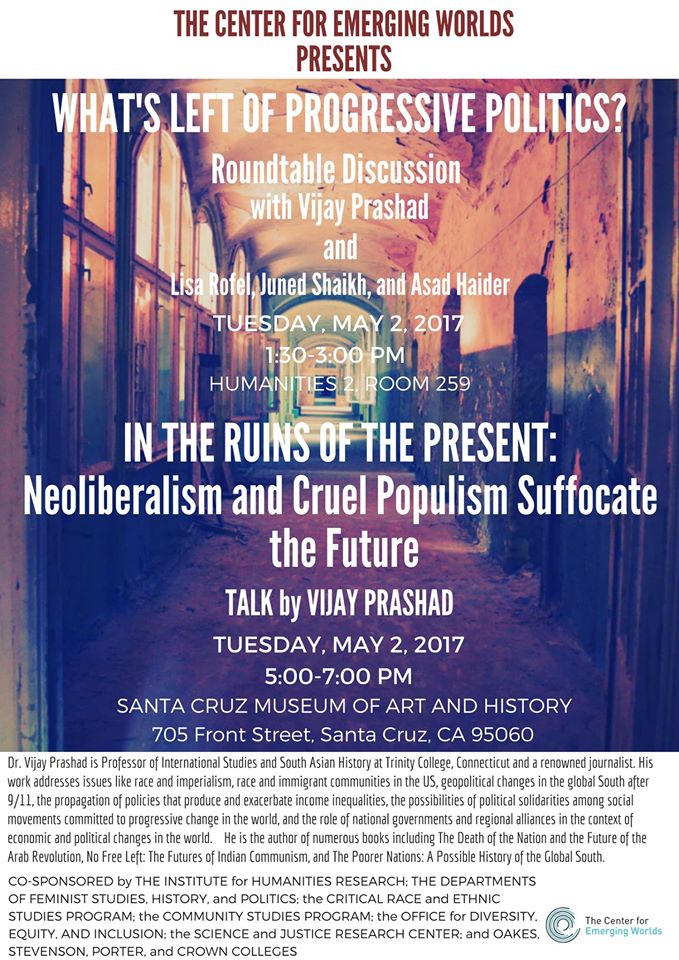 In the Ruins of the Present: Neoliberalism and Cruel Populism Suffocate the Future

Vijay Prashad’s talk In the Ruins of the Present: Neoliberalism and Cruel Populism Suffocate the Future traces the rise of populism across the world, including the global South and North, in the present historical moment. This type of populism expresses itself in anti-immigrant politics and defines the nation in narrow terms – race, ethnicity, and religion. It seeks to exclude immigrants who do not fit within the narrow confines of these categories. This populism does not address the substantive issues of inequality and jobless even if some of its energy is derived from it.

Dr. Vijay Prashad is Professor of International Studies and South Asian History at Trinity College, Connecticut and a renowned journalist. He was trained as a historical anthropologist and received his Ph.D from the University of Chicago. Prashad’s work addresses issues like race and imperialism, race and immigrant communities in the US, geopolitical changes in the global South after 9/11, the propagation of policies that produce and exacerbate income inequalities, the possibilities of political solidarities among social movements committed to progressive change in the world, and the role of national governments and regional alliances in the context of economic and political changes in the world.    He is the author of numerous books. Some of them are – The Death of the Nation and the Future of the Arab Revolution (Berkeley: University of California Press, 2016 and New Delhi: LeftWord Books, 2016). No Free Left: The Futures of Indian Communism (New Delhi: LeftWord Books, 2015). The Poorer Nations: A Possible History of the Global South (London: Verso and New Delhi: LeftWord Books, 2013). Arab Spring, Libyan Winter (Baltimore: AK Press and New Delhi: LeftWord Books, 2012). The Darker Nations: A People’s History of the Third World, (New York: New Press and New Delhi: LeftWord, 2007). Everybody Was Kung Fu Fighting: Afro-Asian Connections and the Myth of Cultural Purity (Boston: Beacon Press, 2001). Karma of Brown Folk (Minneapolis: University of Minnesota Press, 2000). Untouchable Freedom: The Social History of a Dalit Community (New Delhi: Oxford University Press, 1999). His articles appear in media organization s like the Guardian, the Hindu, Frontline, jadaliyya, and AlterNet.

These events are free and open to the public