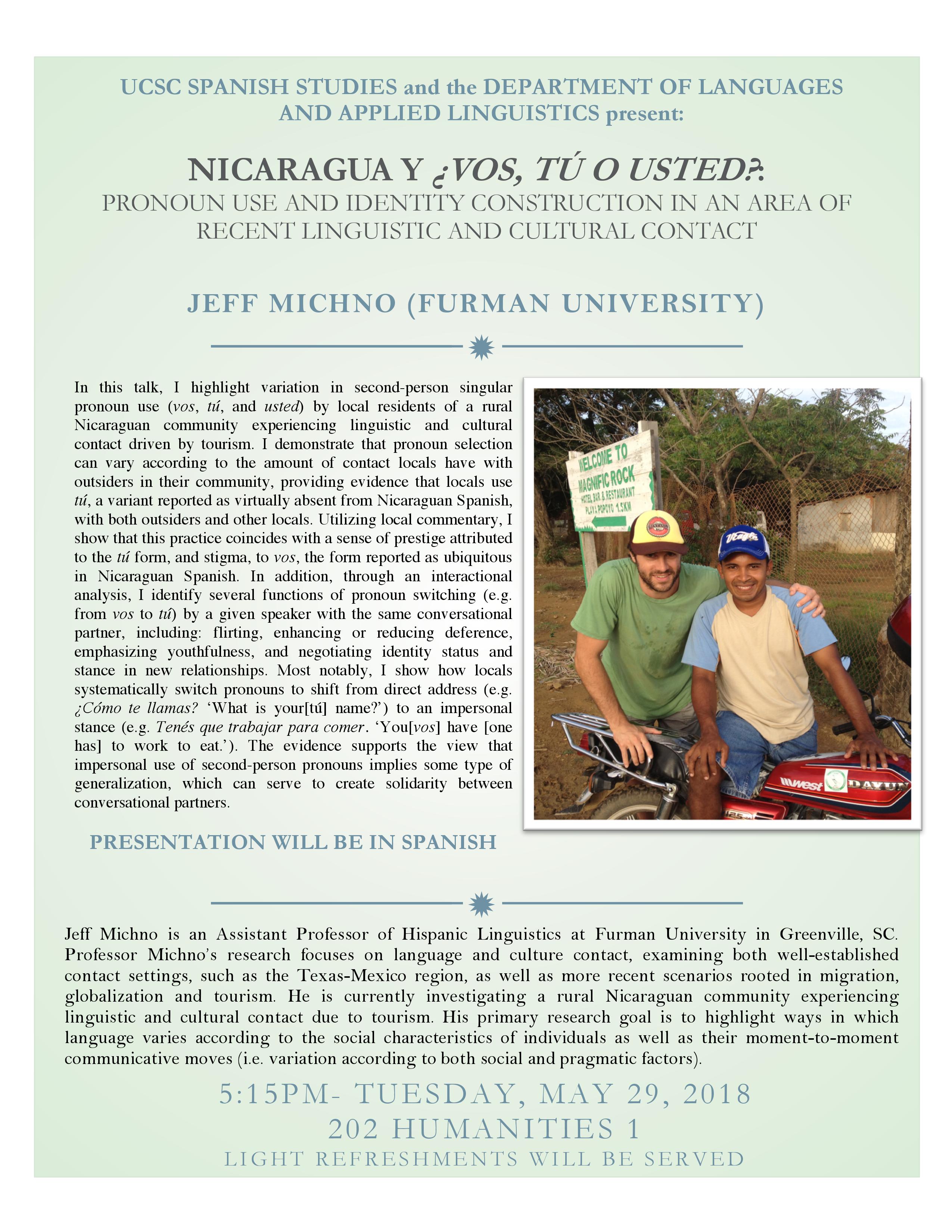 In this talk, I highlight variation in second-person singular pronoun use (vos, tú, and usted) by local residents of a rural Nicaraguan community experiencing linguistic and cultural contact driven by tourism. I demonstrate that pronoun selection can vary according to the amount of contact locals have with outsiders in their community, providing evidence that locals use tú, a variant reported as virtually absent from Nicaraguan Spanish, with both outsiders and other locals. Utilizing local commentary, I show that this practice coincides with a sense of prestige attributed to the tú form, and stigma, to vos, the form reported as ubiquitous in Nicaraguan Spanish. In addition, through an interactional analysis, I identify several functions of pronoun switching (e.g. from vos to tú) by a given speaker with the same conversational partner, including: flirting, enhancing or reducing deference, emphasizing youthfulness, and negotiating identity status and stance in new relationships. Most notably, I show how locals systematically switch pronouns to shift from direct address (e.g. ¿Cómo te llamas? ‘What is your[tú] name?’) to an impersonal stance (e.g. Tenés que trabajar para comer. ‘You[vos] have [one has] to work to eat.’). The evidence supports the view that impersonal use of second-person pronouns implies some type of generalization, which can serve to create solidarity between conversational partners.

Jeff Michno is an Assistant Professor of Hispanic Linguistics at Furman University in Greenville, SC. Professor Michno’s research focuses on language and culture contact, examining both well-established contact settings, such as the Texas-Mexico region, as well as more recent scenarios rooted in migration, globalization and tourism. He is currently investigating a rural Nicaraguan community experiencing linguistic and cultural contact due to tourism. His primary research goal is to highlight ways in which language varies according to the social characteristics of individuals as well as their moment-to-moment communicative moves (i.e. variation according to both social and pragmatic factors).