This talk focuses on Satyajit Ray’s cinematic treatment of an episode from India’s late colonial history in Shatranj Ke Khilari (“The Chess Players,” 1977). Through his portrayal of the betrayal of reason under the pretext of law, Ray makes an appeal on behalf of the visual image as a critique of reason rather than its lure.

This event is co-sponsored by the Center for South Asia Studies. 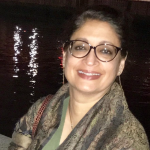 Keya Ganguly is Professor in the Department of Cultural Studies and Comparative Literature at the University of Minnesota. She is the author of States of Exception: Everyday Life and Postcolonial Identity (2001) and Cinema, Emergence, and the Films of Satyajit Ray (2010). She served as Senior Editor of Cultural Critique from 1998-2010, and her essays have appeared in Cultural Studies, New Formations, Race and Class, South Atlantic Quarterly, and History of the Present. Recent and forthcoming essays have explored Mahasweta Devi’s radical politics, the aesthetics of exile, and world cinema in dialectical perspective. She is currently writing a book on the revolutionary utopianism of the early Indian nationalist, Aurobindo Ghose, entitled Political Metaphysics.