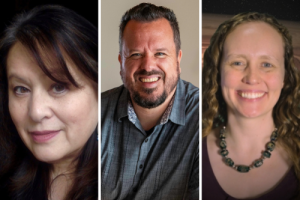 Join us for an online LASER Talk ​featuring Buddhist scholar Paula Arai, astrophysicist Ruth Murray-Clay, and public philosophy scholar Kyle Robertson. The wide-ranging presentations will explore subjects including the science of Buddhist painting, the formation and evolution of planetary systems and the search for life, and the interconnections between philosophy and social justice.

Paula Arai received her Ph.D. in Buddhist Studies from Harvard University, specializing in Japanese Sōtō Zen. She is author of Women Living Zen: Japanese Buddhist Nuns (Oxford University Press), and Bringing Zen Home: The Healing Heart of Japanese Buddhist Women’s Rituals (University of Hawai’i Press), and Painting Enlightenment: Healing Visions of the Heart Sutra––The Buddhist Art of Iwasaki Tsuneo (Shambhala Publications). Her research has received a range of support, including from Fulbright and the American Council of Learned Societies. She trained at Aichi Senmon Nisōdō under the tutelage of Aoyama Shundō Rōshi. Arai is currently a professor of Buddhist Studies at Louisiana State University, holding the Urmila Gopal Singhal Professorship in Religions of India.

Ruth Murray-Clay is a professor of astronomy and astrophysics at UC Santa Cruz who studies the formation of planetary systems, including our solar system. Her theoretical work investigates the birth of planets in gas disks orbiting young stars, dynamical evolution of planetary orbits, and the evolution of atmospheres due to escape over cosmic time. Her goal is to determine the processes that shape the diversity of planetary systems we see today and to place our solar system in cosmic context.

Leonardo Art & Science Evening Rendezvous (LASER) is an international program bringing together artists, scientists, and scholars for presentations and conversations. This event is sponsored by the Institute of the Arts and Sciences in collaboration with the Center for Innovations in Teaching and Learning and The Humanities Institute.