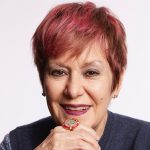 Giannina Braschi was born in San Juan, Puerto Rico. She was a fashion model, singer, and tennis champion in her teen years. She studied literature in Madrid, Rome, London, and Rouen before settling in New York City. With a Ph.D. in Hispanic Literatures from State University of New York, Stony Brook, she taught at Rutgers University, City University of New York, and Colgate University. She has published on Cervantes, Garcilaso, Machado, Lorca, and Bécquer. A Literature Fellow of the National Endowment for the Arts, Braschi has won awards/grants from Ford Foundation, Danforth Scholarship, New York Foundation for the Arts, Reed Foundation, InterAmericas, Instituto de Cultura Puertorriqueña, Rutgers, and PEN. PEN has called Braschi “one of the most revolutionary voices” in Latin American Literature today. Her work is a hybrid of poetry, fiction, theater, and political philosophy. Braschi has published numerous works in Spanish, Spanglish, and English, including El imperio de los sueños (Anthropos, 1988), Yo-Yo Boing! (Latin American Literary Review Press, 1998) and United States of Banana (AmazonCrossing, 2011). Her scholarly publications include a book on Gustavo Adolfo Bécquer and essays on Cervantes, Garcilaso, Machado, and García Lorca. Her collected poems were translated into English by Tess O’Dwyer as Empire of Dreams (Yale University Press, 1994). Her life’s work is the subject of Poets, Philosophers, Lovers: on the Writings of Giannina Braschi (Latinx and Latin American Profiles, Pittsburgh, 2020), a collection of essays edited by Frederick Luis Aldama and Tess O’Dwyer with a foreword by Ilan Stavans. The United States Library of Congress calls her work “cutting-edge, influential and even revolutionary.” In recent years, her avant-garde writings have appeared in far-ranging cultural spaces such as television comedy, chamber music, art and design, theater, and ecologic urbanism.