The THI research cluster “Vernaculars of Travel in South Asia and the Middle East” presents a reading group on Madhavi Murty’s new book “Stories That Bind: Political Economy and Culture in New India.” Madhavi Murty will be in conversation with Radhika Prasad.

Stories that Bind: Political Economy and Culture in New India examines the assertion of authoritarian nationalism and neoliberalism; both backed by the authority of the state and argues that contemporary India should be understood as the intersection of the two. More importantly, the book reveals, through its focus on India and its complex media landscape that this intersection has a narrative form, which author, Madhavi Murty labels spectacular realism. The book shows that the intersection of neoliberalism with authoritarian nationalism is strengthened by the circulation of stories about “emergence,” “renewal,” “development,” and “mobility” of the nation and its people. It studies stories told through film, journalism, and popular non-fiction along with the stories narrated by political and corporate leaders to argue that Hindu nationalism and neoliberalism are conjoined in popular culture and that consent for this political economic project is crucially won in the domain of popular culture.

Moving between mediascapes to create an archive of popular culture, Murty advances our understanding of political economy through material that is often seen as inconsequential, namely the popular cultural story. These stories stoke our desires (e.g. for wealth), scaffold our instincts (e.g. for a strong leadership) and shape our values.

Lunch will be provided. Please RSVP by emailing: VernacularsUCSC@gmail.com.

“Vernaculars of Travel in South Asia and the Middle East” is a THI Cluster that focuses on questions of movement (both conceptual and physical) across regions. It seeks to re-imagine the vocabularies, concepts, and history of travel from the Global South, centering south-south relationships and non-European languages as vessels for reflecting on the political ramifications of mobility and fixity. Co-PIs: Muriam Davis and Nidhi Mahajan.

Madhavi Murty is associate professor in the Feminist Studies department and an affiliate of CRES and Digital Arts and New Media at the University of California, Santa Cruz. Her research and teaching interests center on popular media, nationalism, globalization, feminism, postcolonial theory, cultural theory, and modalities of difference such as race, caste, and gender. 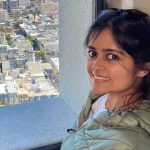 Radhika Prasad is a PhD candidate in the Literature Department, with a Directed Emphasis in Feminist Studies. Her work analyzes language politics in post-independence India, by exploring the embedment of cultural imaginaries in languages. Her dissertation contextualizes the establishment of Hindi as an official language in India within Indian nation-formation and the India-Pakistan Partition, and examines the incommensurability of the official and literary idioms of the language.