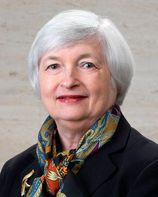 Join us as we present the Foundation Medal to Janet Yellen, distinguished fellow of Brookings Institution and former chair of the Federal Reserve. UC Santa Cruz is proudly recognizing influential women leaders as we champion diversity in all areas of human endeavor.

She is noted for her patient, measured, and accessible explanations of monetary policy while being a thoughtful leader of the Federal Reserve. In her public appearances, she has addresses topics broader than monetary policy, including labor markets, unemployment, and poverty. She was considered by some to be the most powerful woman in America.

Presented in partnership with the Sidhartha Maitra Memorial Lecture.

Program will be followed by a dessert reception

Presented in partnership with the Sidhartha Maitra Memorial Lecture Series
The Maitra Lecture Series was established by UC Santa Cruz Foundation Trustee Anuradha Luther Maitra in memory of her husband, Sidhartha—a scientist, entrepreneur, and admirer of humanist, rationalist, modernist thinkers. The lecture is a signature campus gathering, and integral to the intellectual life of the campus.