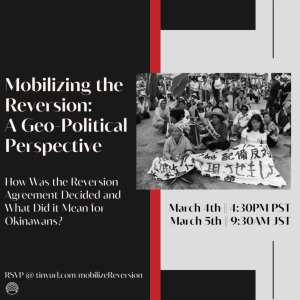 The Okinawa Memories Initiative is pleased to invite you to our upcoming event, “Mobilizing the Reversion: A Geo-Political Perspective,” a roundtable discussion featuring Professor Mike Mochizuki from George Washington University and Dr. Fumi Inoue, a recent doctoral graduate from Boston College, in conversation with OMI Directors, Professors Alan Christy and Dustin Wright. This is the second event in our series on Okinawan Reversion, in which the speakers will be focusing on Reversion from a geo-political perspective, and the politics behind the Reversion Agreement between the United States and Japan.

This year’s programming is focused on the 50th Anniversary of Okinawa’s return to Japan. After 27 years of U.S. Occupation, and 66 years of being a Japanese semi-colony, Okinawa was formally returned to Japan on May 15, 1972. But this was not simply a singular moment. When we say ‘Reversion’, we envision the lived experiences of thousands of Okinawans across the country who experienced a major political, economic and social shift.

At OMI, we believe that speaking about Okinawa is to speak about the world. The political ramifications of Okinawa’s new status as a Japanese Prefecture rippled across the world’s waters. Beyond that, the everyday lives of Okinawans changed irrevocably, not only in large ways, but in small ways as well.

This event is co-sponsored by The Humanities Institute.