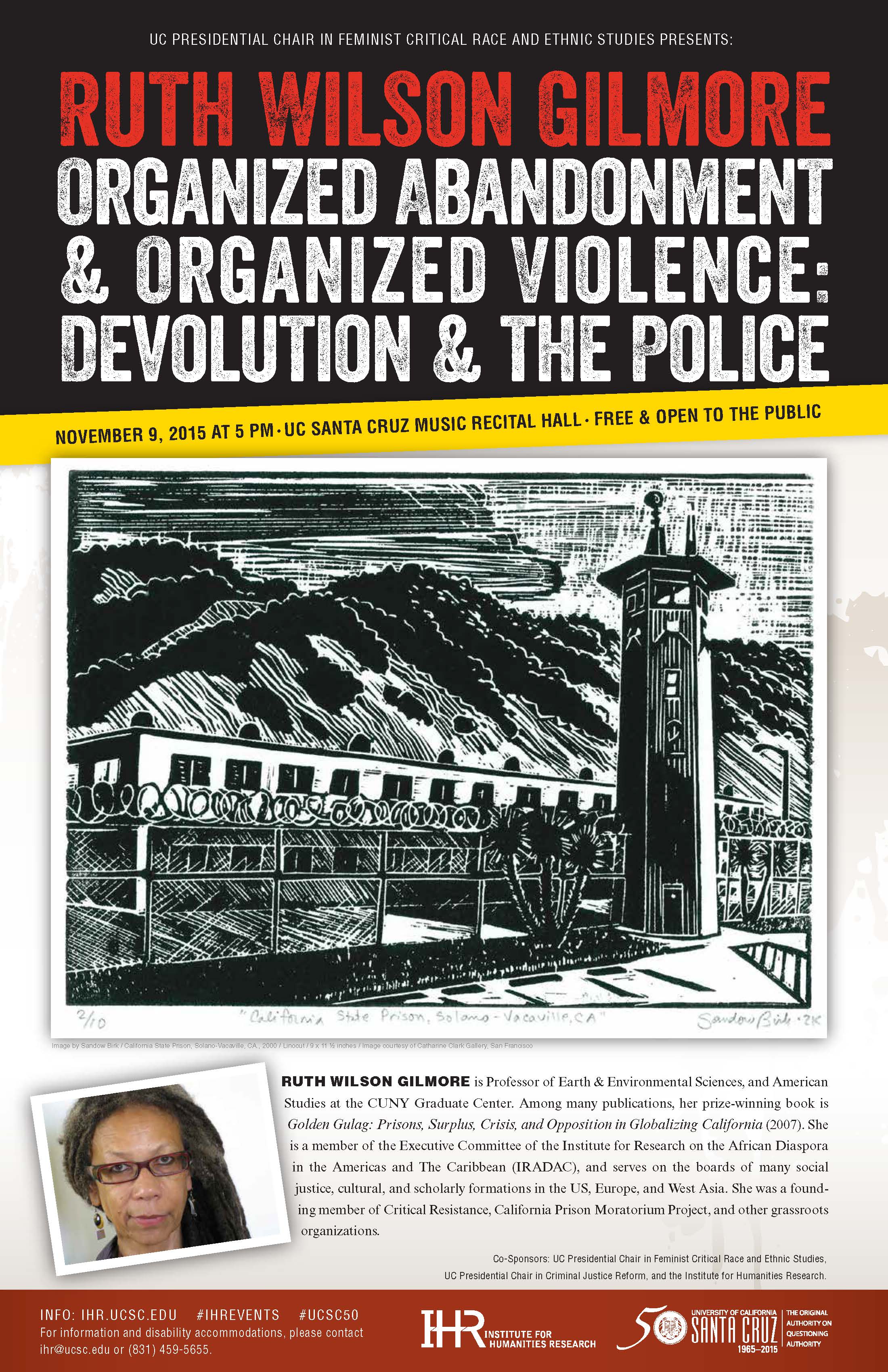 CITY ON A HILL PRESS ARTICLE: The UC Presidential Chair in Feminist Critical Race and Ethnic Studies invited Ruth Wilson Gilmore to UC Santa Cruz to discuss police violence and mass incarceration in a lecture called “Organized Abandonment & Organized Violence: Devolution and The Police.” Her discussion in the UCSC Music Recital Hall on Nov. 9 paralleled the theme of her prize-winning publication “Golden Gulag,” a prescient examination of California prisons and the consequences of a punitive justice system. Continue Reading Article

EVENT INFO:
“America locks up too many people for too many offenses, jamming prisons, ruining families and running up steep taxpayer bills. That’s the party line on mass incarceration heard from social critics for years, but now it’s coming from a new chorus: police chiefs by the score.” –San Francisco Chronicle, October 22, 2015

On November 9, the UC Presidential Chair in Feminist Critical Race and Ethnic Studies at UC Santa Cruz will examine the issue of police and prisons with a free public lecture by Ruth Wilson Gilmore. The title of her talk is “Organized Abandonment & Organized Violence: Devolution & the Police.” Feminist studies professor Bettina Aptheker, co–chair of the UC Presidential Chair with literature professor Karen Yamashita, explained why they decided to bring Gilmore to campus.

“Several years ago, Ruth Wilson Gilmore wrote a timely and significant book, ‘Golden Gulag: Prisons, Surplus, Crisis, and Opposition in Globalizing California,’ published by the University of California Press,” said Aptheker. “Gilmore, a well-known public intellectual, documents in this book the ways in which California embarked upon the largest prison-building project in its and the nation’s history. Her work critically examines the political and economic forces that combined to propel such an ominous course.” Aptheker added that despite a crime rate that has been steadily declining for decades, California continues to incarcerate, even in the face of federal court orders to reduce its overcrowded and repressive system. “Most affected by these rates of incarceration are men and women of color,” Aptheker noted. Continue Reading

Ruth Wilson Gilmore is Professor of Earth & Environmental Sciences, and American Studies at the Graduate Center, CUNY. She has many honors and awards, and has delivered invited lectures at universities and cultural institutions around the world. Among many publications, her prize-winning book is Golden Gulag: Prisons, Surplus, Crisis, and Opposition in Globalizing California (2007). Current projects include a second edition of Golden Gulag, as well as several other book projects: Fatal Couplings: Essays on Motion, Racial Capitalism, and the Black Radical Tradition; and Big Things: Reconfigured Landscapes and the Infrastructure of Feeling. She is a member of the Executive Committee of the Institute for Research on the African Diaspora in the Americas and The Caribbean (IRADAC), and serves on the boards of many social justice, cultural, and scholarly formations in the US, Europe, and West Asia. She was a founding member of Critical Resistance, California Prison Moratorium Project, and other grassroots organizations.

The Music Center is located east of Heller Drive, and is best accessed from the West Entrance of the campus. At the Main Entrance, proceed west on Empire Grade, then turn right on Heller (the West Entrance). Go four stop signs and turn right on Meyer Dr.
$4 parking available in the Performing Arts Lot #126.
Click here for a map and directions

For information and disability accommodations, please contact ihr@ucsc.edu or (831) 459-5655.