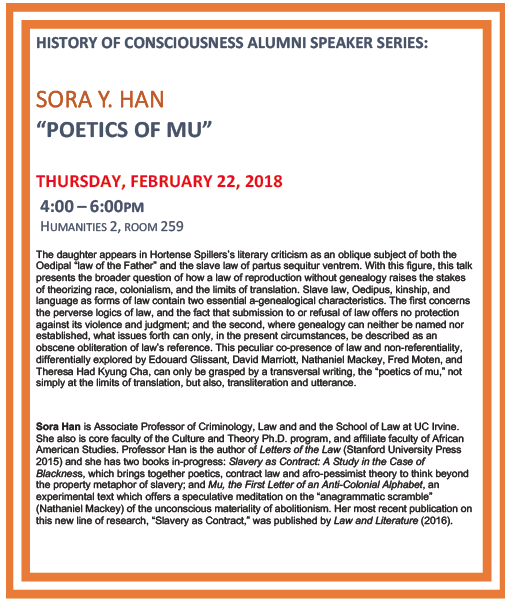 The daughter appears in Hortense Spillers’s literary criticism as an oblique subject of both the Oedipal “law of the Father” and the slave law of partus sequitur ventrem. With this figure, this talk presents the broader question of how a law of reproduction without genealogy raises the stakes of theorizing race, colonialism, and the limits of translation. Slave law, Oedipus, kinship, and language as forms of law contain two essential a-genealogical characteristics. The first concerns the perverse logics of law, and the fact that submission to or refusal of law offers no protection against its violence and judgment; and the second, where genealogy can neither be named nor established, what issues forth can only, in the present circumstances, be described as an obscene obliteration of law’s reference. This peculiar co-presence of law and non-referentiality, differentially explored by Edouard Glissant, David Marriott, Nathaniel Mackey, Fred Moten, and Theresa Had Kyung Cha, can only be grasped by a transversal writing, the “poetics of mu,” not simply at the limits of translation, but also, transliteration and utterance.

Sora Han is Associate Professor of Criminology, Law and and the School of Law at UC Irvine. She also is core faculty of the Culture and Theory Ph.D. program, and affiliate faculty of African American Studies. Professor Han is the author of Letters of the Law (Stanford University Press 2015) and she has two books in-progress: Slavery as Contract: A Study in the Case of Blackness, which brings together poetics, contract law and afro-pessimist theory to think beyond the property metaphor of slavery; and Mu, the First Letter of an Anti-Colonial Alphabet, an experimental text which offers a speculative meditation on the “anagrammatic scramble” (Nathaniel Mackey) of the unconscious materiality of abolitionism. Her most recent publication on this new line of research, “Slavery as Contract,” was published by Law and Literature (2016)