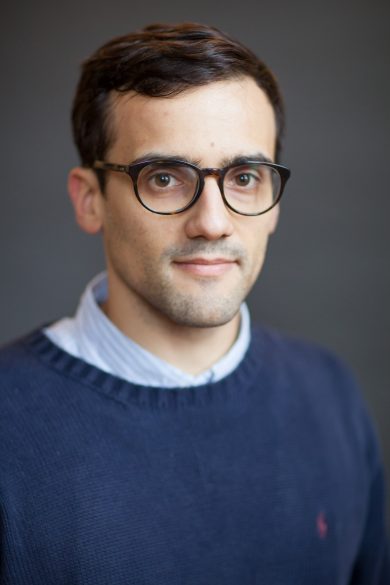 Filippo Gianferrari is an Assistant Professor in the Literature Department and this year’s 2020-2021 THI Faculty Research Fellow. Professor Gianferrari arrived at UCSC in 2019, after completing his PhD at the University of Notre Dame and teaching at both Vassar College and Smith College.

In October, THI spoke with Gianferrari about his current project and broader research. A scholar of Dante, Professor Gianferrari takes an unorthodox and interdisciplinary approach to thinking about how Dante’s work interfaced with contemporary educational thought in the Western world. We discussed his current book project, emerging analytical frameworks in medieval studies, and how his fellowship will facilitate his own contribution to this fascinating field of study.

Congratulations on your Faculty Research Fellowship Professor Gianferrari! To begin, perhaps you can tell us a bit more about yourself. What is your academic background? And how did you come to be interested in Dante?

Thank you, I am very excited to begin my time as a THI fellow. While I was studying literature as an undergraduate at the University of Bologna in Italy, I became really interested in Dante’s Divine Comedy and in the culture that nurtured it. Since I wasn’t very interested in studying Dante primarily as Italy’s national poet and the father of its literary language, I became involved with the Anglo-American branch of Dante studies. I ended up pursuing my Ph.D. at the Medieval Institute of The University of Notre Dame, in Indiana. This is what Dante can do to you!

For those of us unfamiliar with Dante Studies as a field, can you give us a general idea of your area of research? How does your work intervene in the current state of the field, or perhaps the study of literature more generally?

Because Dante is internationally renowned and one of the very few pre-modern authors to be still studied all over the world, we tend to forget that when he started, being a layperson writing in vernacular (instead of Latin, the official language of literature and learning) gave him near-to-zero chances to become an authoritative writer. Hence I began to investigate how he managed to do what he did. Everybody agrees that Dante saw the potential represented by the growing vernacular readership and invested heavily into this rising literary language. What I try to assess is particularly how in his works Dante educated these non-specialized readers.

Training the Reader will offer the first account of Dante’s unique—and mostly unexplored—contribution to the history of Western education.

You’ll be using the opportunity of being a Faculty Research Fellow to work toward completing your book, tentatively titled: Training the Reader: Dante and the Rise of Vernacular Literacy. Can you tell us a bit about what you hope to do in this text? What’s the core argument or idea of this particular project?

Training the Reader argues that both in his earliest work, the New Life, and his most mature one, the Comedy, Dante engaged extensively with the corpus of texts used in contemporary language instruction. The poet’s aim was to revise popular understandings of poetry, of its significance for nurturing ethical communities, and of the role of classical antiquity in Christian culture. Training the Reader will offer the first account of Dante’s unique—and mostly unexplored—contribution to the history of Western education.

The educative dimension to this project is really fascinating and seems like a major contribution to the field. Can you tell us about the relationship between educational discourses and Dante’s work? Why is this relationship so important? 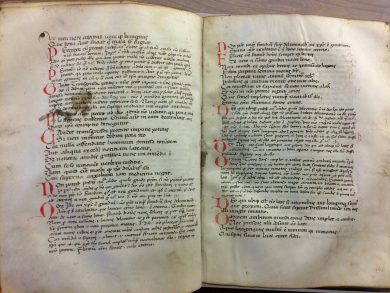 Late-medieval Italy represents an interesting case for studying the impact of literacy on societies and cultures. During the thirteenth century, Italy underwent rapid economic growth as well as radical social and cultural transformations. The rise of a mercantile and professional class compelled an increased demand for literacy instruction, which resulted in an unprecedented proliferation of urban schools, often under the direction of lay teachers. Dante enthusiastically embraced the education of this new lay readership. In the Comedy, he fulfilled this educational project. The poet’s deep concern for the political and spiritual reform of his readers shines through the lines of the poem and has been acknowledged by medieval and modern readers alike. The language he elected for his masterpiece, the vernacular, speaks to the wide scope of his appeal for reformation. Although the pedagogical dimension of the poem, and of Dante’s poetics in general, is no news, we have never observed such discourse against its contemporary education.

A big part of your work is working with original manuscripts. What do you want people to know about this aspect of your research? What have you discovered as you’ve examined these types of materials, and what did you go in expecting to find?

Most innovative and central to my research is the interdisciplinary integration of recent historiographical findings in the fields of medieval and humanistic education with current trends in Dante studies. The two principle tools of my critical and historical analysis of medieval literacy education are the history of the book and Latin paleography. Medieval manuscripts of school books are essential to reconstruct what literary texts were read in schools and how they were read. Recent paleographical studies of the manuscripts of medieval school texts are essential to reconstructing transformations and trends in the literary school canon. I conducted manuscript research in several European libraries. Seeing several exemplars of medieval Latin primers, I began to outline a medieval readership of such books from their textual layout, readers’ marks, and other marginalia.

The study of medieval literature seems to be undergoing a bit of a transformation in terms of its disciplinary moorings, moving toward more interdisciplinary modes of engagement. What do you think is important about this shift? How has it changed the field so far, and how do you hope your own work interfaces with this change in scholarship?

I think that current interdisciplinary approaches are essential to a correct understanding of the Middle Ages for two reasons: first, Medieval culture was supernational to an extent that it is hard for us to reconstruct if we limit our work to the boundaries of modern national languages; second, our current division of disciplines, especially the major divide between humanities and sciences, does not reflect how medieval knowledge was articulated. Therefore, I think that current interdisciplinary approaches to the study of the Middle Ages have untapped potential to change our traditional understanding of medieval literature and culture.