“The Humanities Institute really works to bridge the gap between the university and the community,” says Sandra Harvey, who received her PhD in Politics at UCSC in 2017. “This is a space where that is really happening, and there aren’t too many of those spaces.”

She didn’t always feel drawn to the Humanities, though. 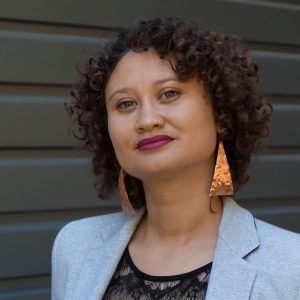 “I had this prejudice that folks in the Humanities were doing things that were very out of touch with what was going on in the streets,” Dr. Harvey says. Her attitude transformed when, as part of her doctoral studies, she took a class with Angela Davis. Through that class, Dr. Harvey came to understand how necessary abstract conversations are for advancing social justice.

Dr. Harvey chose to integrate Humanities studies into her PhD research, with an emphasis in Feminist Studies and History of Consciousness. Harvey became a research development fellow at The Humanities Institute, examining the steps that academics need to take to conduct research. These include the unglamorous but all-important skill of securing funding.

Dr. Harvey worked with colleagues on grant applications—both her own and others’—which demystified the process of acquiring funding. As a research fellow, she exchanged feedback on those applications with The Humanities Institute team—comprised of women staff— an opportunity she relished.

“I don’t think that I would be a successful academic if I hadn’t had the opportunity to be mentored by so many important women,” she says.