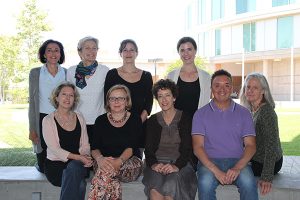 UCHRI’s Residential Research Groups (RRGs) are in essence teams of researchers assembled to work on a commonly-defined research agenda. The organizing premise of the RRG program is that when the challenges of communicating across disciplines are surmounted, breakthroughs in knowledge are possible. Often, these breakthroughs result in interesting and innovative research projects in the humanities.

Such was the case with our spring 2013 Digital Princess RRG, whose stated goal was to “create an open-access, online resource for study of the voluminous correspondence of Renaissance Italy’s most consummate female social networker, Isabella d’Este (1474-1539), marchesa of Mantua.” The resulting archive—a collaboration among several postsecondary institutions and researchers—uses a variety of digital technologies to bring d’Este’s works to life.

We asked Deanna Shemek, Professor and Chair of UC Santa Cruz’s Department of Literature, about the RRG’s role in the final archive. Below are her responses.

1. How did your time at UCHRI contribute to the success of the Isabella d’Este project?

The inaugural project of IDEA: Isabella d’Este Archive was our interactive platform to house image files of 28,000 letters from Isabella d’Este’s correspondence, which is a customized version of the Medici Archive Project’s BIA: Building Interactive Archives tool. These letters relate in different ways to all of the projects in IDEA: to some projects the letters are central; to others they supply crucial documentation. Without the ability—thanks to a UCHRI Residential Research Group grant in 2013—to meet daily over several weeks in a small working group, we could not have thought through all of this platform’s features. The RRG provided a context in which to meet for one week with an expanded IDEA team at the end, to critique the work, generate ideas for problem-solving, and envision ways of moving IDEA forward. Plain and simple: without the RRG, we quite simply could not have begun the IDEA project.