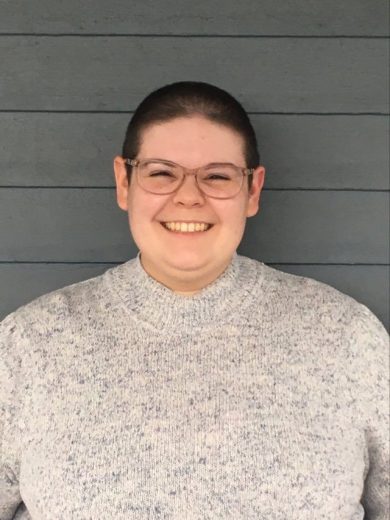 At the beginning of the Spring quarter, we learned more about Fournier’s ongoing research and public humanities work. Fournier received a THI Summer Public Fellowship in 2021-22 to work with Critical Resistance, an organization that is committed to ending the prison-industrial complex through education, prisoner solidarity, and political action. We discussed Fournier’s fellowship and the influence that this advocacy work has had on their continuing academic research.

Hi Jess! Thank you for agreeing to chat with us about your ongoing research and scholarly activities. To start us off, can you give us a brief description of what you are researching as a PhD student in Feminist Studies?

Thanks for taking the time to talk with me! My research historicizes the transformative justice movement against sexual violence, which emerged in the late 1990s SF Bay Area as part of prison abolition and feminist movements and continues today. While my research is still in the early stages, I’m particularly interested in the movement’s institutional and intellectual history: How do the movement’s philosophy and strategy change? What institutions does the movement engage with or not engage with, and why? What are the larger political, economic and social conditions that account for the movement’s emergence in the 90s and its staying power over time? 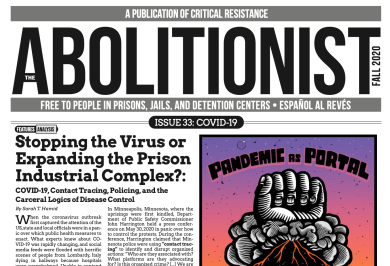 A recent copy of The Abolitionist, the publication Fournier worked on archiving as a Public Fellow.

As a THI Public Fellow, I worked on two projects with The Abolitionist, Critical Resistance’s bilingual newspaper dedicated to the strategy and struggle of prison industrial complex abolition. The paper has existed since 2005 as a tool of prisoner organizing and a source of news and analysis about issues that affect communities targeted by the prison industrial complex.

My first task was to analyze this incredible archive of past issues using guiding questions from the Editorial Collective. One goal was to collect information that could help make past issues more easily searchable: column and author names, the issue’s topic or theme, whether the Spanish and English versions were both online, featured images and their creators, etc. In addition, I also analyzed how the overall issue reflected Critical Resistance’s approach to political education at a particular time. This included analyzing how particular issues were framed, how many submissions were written by prisoners, and the specific topics discussed.

My second task was to conduct outreach to encourage activist groups and universities to sign up for institutional subscriptions. The Abolitionist has 5,000 current subscribers and is free to imprisoned people. Paid subscriptions allow The Abolitionist to remain a free resource, and also provides an opportunity to broadly share and archive its analysis. I would highly recommend subscribing if you are interested in learning more about prisoner organizing and analysis of issues like defunding police and responding to COVID-19, for example.

In addition to working with Critical Resistance, you’ve also volunteered with Black & Pink, a prison abolitionist organization of imprisoned and free-world LGBTQ people and people living with HIV/AID. How has your work with these organizations as both a volunteer and Public Fellow shaped your scholarship and transformed your research/research questions?

I started volunteering with Black & Pink in Boston in 2017, primarily answering correspondence and requests for resources from imprisoned members. Although I’ve moved out of Boston, I continue to have a prison penpal friendship that began through Black & Pink, which I’m extremely grateful for.

These experiences have definitely shaped my research. Conversations about how to address sexual violence have been a part of prison abolitionist spaces for a long time and are important to learn from. One example is the 1970s and 1980s collaboration between the the group Prisoners Against Rape in Lorton, Virginia and the DC Rape Crisis Center, which Sophie Kupetz details in this oral history. The Abolitionist archives are a fascinating look at how those conversations have continued in more recent decades. Over the summer, I read letters to the editor, interviews and features talking about how communities have responded to sexual violence without the use of police and prisons, which has been enormously helpful in understanding the transformative justice movement.

More broadly, I think the work of both groups has encouraged me to be attentive to building solidarity and acting with humility and respect for the wisdom of imprisoned people who have been in this fight for a long time under incredibly hostile conditions. I hope that in some small way my research can contribute.

This year, our annual theme at THI is Imagination. It seems like combating mass incarceration (and getting wider society behind this goal) requires a large amount of imaginative work, from divorcing the notion of public safety from policing to developing new community strategies to reduce and mitigate harm that don’t rely on prisons. What do you think the role of imagination is in the fight to end mass incarceration?

For me, I think of imaginative work as a precursor to action – hope and belief can encourage you to take action and remain committed even in the face of defeats and repression.

This is a really interesting question! For me, I think of imaginative work as a precursor to action – hope and belief can encourage you to take action and remain committed even in the face of defeats and repression. And that is needed, because abolishing the prison industrial complex will take coordinated mass action – the kind of work Critical Resistance is doing.

One example that comes to mind is the 2018 prisoner strike that took place across the country, where imprisoned people engaged in work and hunger strikes, sit-ins and boycotts to demand an end to prison slavery and racist sentencing laws, explicitly connecting their action to the Attica Prison Uprising of 1971. Another example is the work of Survived and Punished, which works to free criminalized survivors and in the process reimagine what safety and justice for survivors looks like as part of the effort to create a world without prisons.