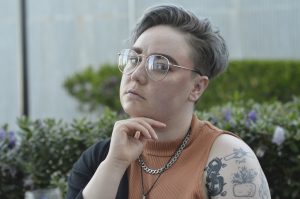 Kaiya Gordon is a PhD student in Feminist Studies at UC Santa Cruz. Gordon’s research explores trans representations in media, literature, art, and sites of historical memory like archives and museums. Gordon’s academic research actively engages with activism and ongoing social movements both within and outside the university.

In October, we learned more about Gordon’s ongoing research and public humanities work. Gordon received a THI Summer Public Fellowship in 2021-22 to work with the GLBT Historical Society in San Francisco. We discussed Gordon’s fellowship and the influence that this public history work has had on their continuing academic research.

Hi Kaiya, thank you for taking the time to speak with us here at THI. To start off, can you share a little bit about what you are currently researching and working on?

Thank you so much for taking the time to speak with me! One project in the works is my manuscript, Polaroid, which is still trying to find a home. Polaroid is anchored by two long prose-poems/lyric essays which consider archival and museum representations of Andy Warhol’s trans muses––Candy Darling and others. Polaroid also seriously considers trans and queer intimacy outside of traditional romantic relationships. The manuscript is a formal experiment, rooted in found and invented forms. I am also working on expanding an essay which considers gendered play in Bride of Frankenstein, and I am working as a Teaching Assistant for Feminist Studies: An Introduction.

Last summer, you were a THI Public Fellow with the Gay, Lesbian, Bisexual, and Transgender (GLBT) Historical Society in San Francisco. How would you describe your experience working at the GLBT Historical Society?  In broad strokes, what type of project(s) did you help build there? 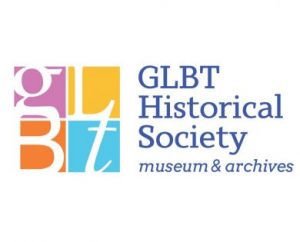 Kelsi Evans and Isaac Fellman were instrumental to my research at the Society. I really appreciated their mentorship, expertise, and point of view as archivists, which complimented my point of view as a researcher. During my time at the Society, I built two source sets (groups of primary sources meant to be used as an introduction to a specific topic). One source set, “Non-binary and Genderqueer People,” considered gender variance, in terms of people, movements, and communities. The other source set, Prisons, which is not yet available online, explored the Prison Industrial Complex by showcasing the experiences of LGBTQ+ people inside and allied people outside, and by taking a look at specific policies and state actors integral to incarceration of LGBTQ+ people. Building these source sets was a very informative and engaging experience––the Society has so many incredible sources which draw a complex picture of LGBTQ+ life.

How do you think public humanities projects at sites of memory like museums, historical societies, and archives contribute to the ongoing fight for social, economic, and political equality writ large?

Historical sites like museums are loci of colonial projects, and represent what we are working against. When we look at such sites, it’s clear who is valued and who isn’t; whose history is saved (and why!) and whose histories are transformed by the State to further the status quo. I think that community archives, and other humanities projects, can work against this colonial, white supremacist, hetero and cisnormative logic, and create spaces for material history which can be passed down through generations. Recently, I saw some discourse on Twitter regarding the rift in communication between queer and trans generations. I think that archives (and spots like archives) are a place to go to really connect with that history and movement language, in order to enrich the present in a political way.

Your academic research partly focuses on the archive and the ways that it shapes how different groups are represented and remembered. How did your work at the Historical Society push your academic research forward or raise new avenues of inquiry for your dissertation project? Which collection(s) at the Society most impacted your thinking about your own research?

There were so many incredible collections at the Society! Two that come to mind are the Ari Kane Papers and Transsexual News Telegraph Papers. My work as a THI Public Fellow certainly opened up new avenues of inquiry––in particular, researching the lives of gender variant people was both inspiring to me as a trans + genderqueer person, and brought forth new questions about how material conditions inform how people name and politically orient themselves.

I’m interested in how non-conforming people build communities and identity categories together, and what causes those built things to be changed over time (for example, where has the “androgyne” community gone? Why is that no longer a way people name themselves?). One of the reasons I was struck by Transsexual News Telegraph (which didn’t make it into the source set because of privacy concerns) was that free copies of the zine were distributed to incarcerated trans people, and those same people often wrote to the editor, Gail Sondegaard, describing how the magazine functioned as an entry-way into trans community. Sondegaard even went to visit some of the people she corresponded with. It strikes me that such connection between incarcerated and non-incarcerated people is still something that is pushed to the wayside in organizing––when organizing with incarcerated people (especially incarcerated trans/gender variant people) seems to me to be foundational to brainstorming and enacting what a world without prisons looks like.