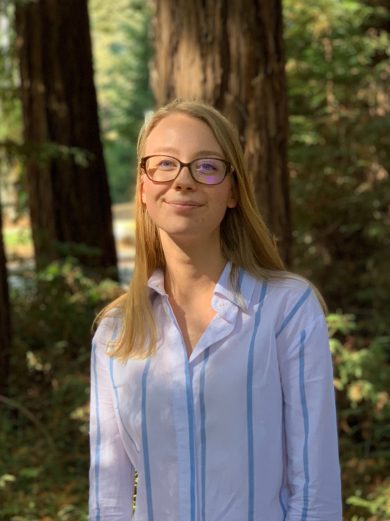 Linda Ulbrich is a PhD Candidate in the History Department. Ulbrich’s project “Yesterday Was a Difficult Day to Be Sister”: Nursing and Trauma in the First World War” centers the nurses who treated soldiers and other victims of World War I, and approaches this topic from the perspective of emotional experience.

Hi Linda! Thanks so much for taking the time to speak with us about your ongoing research and your time as a THI Fellow.

To begin, can you give us a general idea of what you are currently researching?

Yes, definitely! My research centers on British First World War nurses’ experiences and understanding of their suffering and their patients’ suffering from an international perspective. Essentially, I’m trying to move beyond the Western Front perspective common in both scholarly work and popular conceptions of the war to include the experiences of nurses stationed in military hospitals, casualty clearing stations, and hospital trains on the Western and Eastern Fronts; on hospital ships in the Mediterranean Sea; in military and convalescent hospitals in British India, Mesopotamia/the Middle East, and Alexandria, Egypt; and in charitable hospitals and soup kitchens in Southeastern Europe where nurses treated local populations as often as they did soldiers. Despite the variety of locations where nurses were stationed, all nurses worked with patients in all states of physical pain arriving at times one-by-one and other times so quickly that there was no space for them. Many patients’ illnesses and wounds were so severe that the only treatment available to them focused on making them as comfortable as possible until they died. Nurses on hospital ships or trains regularly faced artillery fire and those stationed in independent charitable hospitals the risk of occupation by enemy troops. As a result, nurses often worked under incredibly stressful, overwhelming conditions in which they were surrounded by soldiers’ suffering and able to do little to ease it, and were at great risk of a variety of dangers themselves.

In my research, I focus on this emotional and sometimes traumatic experience of the war. To do so, I employ methods drawn from the fields of trauma studies and the history of emotions to analyze what I call nurses’ personal writing- their letters, diaries, and, sometimes, memoirs. My project also pays attention to the unique position nurses occupied in the First World War as neither civilians nor combatants. Nurses were, of course, not soldiers, but their experience of the war’s violence and destruction and their role in healing some of that violence makes them different from British civilians as well. This in-between position often combined with the suffering they witnessed and experienced themselves to have an important impact on how nurses viewed the war and their role in it, and this is really what is at the heart of my research.

That sounds so interesting! How does focusing on the emotional experiences of British nurses who treated soldiers during World War I offer a unique perspective of this historical period? 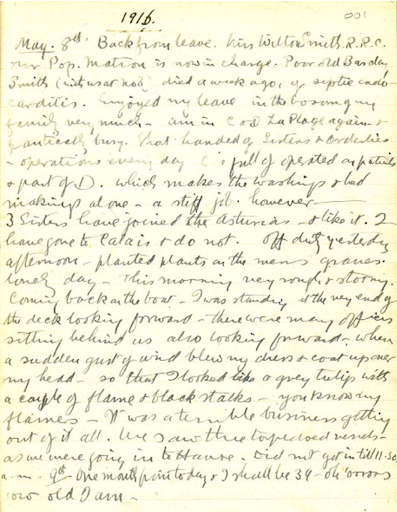 There has been a lot of scholarship focusing on British women’s experience of the First World War, though few works have investigated the war’s emotional toll or how nurses experienced and wrote about the suffering the war caused. However, I think that this approach can continue to try to answer some of the same questions asked by previous scholarship. These questions ask whether or not women’s wartime work elicited any lasting changes in British society that could be seen as a step towards gender equality and have also asked how British women understood their role in the First World War. I think that this focus on the emotional experiences of British nurses also relates directly to an aspect of First World War scholarship that looks at society’s perception of soldiers. Many in British society feared that returning soldiers had been so deeply impacted by their experience of and participation in the war’s violence that they would be unable to live peaceful, civilian lives. Scholars have explored these fears of the war’s psychological effects on soldiers, but, for me, this begs the question of whether similar fears existed surrounding nurses and also whether nurses might have struggled to participate in post-First World War society. This is an important consequence, I think, of nurses’ position between civilians and soldiers and something that help us understand the war’s effects in a new way.

The heavy emotional toll that the current Covid pandemic has taken on medical professionals, especially nurses, has been a topic of widespread discussion lately. Has your study uncovered any parallels between what World War I medical workers experienced and what medical professionals encounter today? What are those parallels or connections?

It’s been so amazing to see conversations happening around how this pandemic impacts nurses and others in the medical field and what we need to do as a society to better support our healthcare workers.

Doing this research while in the midst of the Covid pandemic has been really impactful for me. It’s been so amazing to see conversations happening around how this pandemic impacts nurses and others in the medical field and what we need to do as a society to better support our healthcare workers. I personally see many parallels between the experiences of medical professionals working in our current pandemic and in the First World War. The connection that stands out the most to me, though, is the disconnect in both of these periods between medical workers’ roles and perceptions as healers of the sick and injured and the reality of the limits of medical knowledge and treatments. Nurses and doctors in the First World War were often unable to really heal their patients. A lot of their work instead focused on minimizing pain and the risk of infection, but they lacked a number of key medical treatments to be able to treat certain types of injuries or infections. Penicillin was not available until 1928, so wound infection was one of the greatest threats facing injured soldiers but also something the medical profession was really unable to treat at the time. Antidotes to the poison gasses used in the First World War were unavailable, and still do not exist today, so soldiers exposed to those could only be made as comfortable as possible. The early stages of the Covid pandemic featured a similar helplessness in the medical field. Before Covid vaccines and the prevalence of antiviral treatment, medical professionals were unable to heal those most severely affected by the virus. In both of these periods, it has been difficult for medical professionals, meant to be those who heal our wounds and illnesses, to cope with their inability to help patients. Outside of the First World War and Covid pandemic, this situation has existed as well with other wars and disease outbreaks, and it is also faced quite regularly by medical professionals working in critical care units. Research on this type of nursing shows that there is a lot we can do to support the emotional burden carried by critical care nurses, including continuing to further research this topic. Thankfully, it seems that the Covid pandemic is having that very effect and will, I hope, result in even more acknowledgment of and support for the emotional labor conducted by medical professionals. 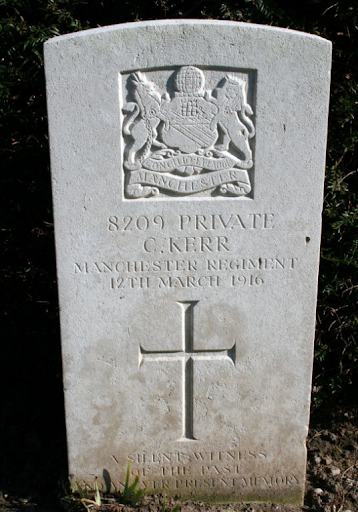 Photograph of Private Charlie Kerr’s gravestone in Étretat, France. Appleton nursed Kerr for 15 days in March of 1916. After he died, Appleton recounted how Kerr wondered what dying would be like and said that she took comfort in the fact that he died as peacefully as she had said he would. Appleton wrote on March 13th, the day after Kerr’s death, that “Yesterday was a difficult day to be ‘Sister’.”

It looks like you have consulted some really interesting historical archives! Is there a document or document collection that has really spoken to you and helped you conceptualize your project? Which document/document collection is that, and why was it so impactful?

The collections at the Imperial War Museum in London related to nursing during the First World War have really impacted my project. In particular, the diary of nurse Edith Appleton that is held there was a huge catalyst in bringing me to employ some of the methods of trauma studies and the history of emotions in my work. Appleton’s diary, which was also published by the Imperial War Museum and edited by historian Ruth Cowen, spans almost the entirety of her service from 1914 through 1919. When I first started reading her diary for my Master’s essay, I was surprised that Appleton wrote entries nearly every day and with such a level of detail that I could picture her wartime experience myself. Appleton’s diary is also very illuminative of the potential effects of nurses’ position between soldier and civilian. There is an equal amount of patriotism and praise for British military victories and innovations in weaponry as there is compassion for and distress over soldiers’ suffering and scorn over the use of poison gas by any side of the war. This delicate balance that Appleton strikes really struck me and led me deeper into wanting to understand the complex emotions at work in her experience, and the experiences of other nurses. Analyzing the stark contrast as well between the moving language that Appleton uses in some entries to describe particular patients with the brevity and detachment of other entries was one of the first ways I tried to gain that understanding. Because of how deeply I’ve worked with Appleton’s diary, I’ve come to feel as though I really know her and to appreciate the impact of her experience on her psyche. That’s definitely something that I think will always stick with me.