A Career Built Around Community 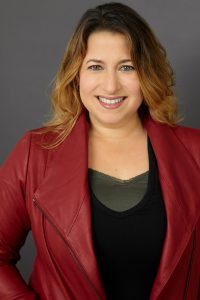 Literature PhD (2015) Ariane Helou returned to Santa Cruz on Friday, August 10 to participate in Weekend with Shakespeare. Currently a Lecturer in French and Francophone Studies at UCLA, Helou led a session about poetry and transformation in Romeo and Juliet for the participants. She brings a valuable perspective to this topic, having spent the early half of the summer in Santa Cruz as the dramaturg for the Santa Cruz Shakespeare production of the play. In this capacity, she ensured that everyone had the knowledge they needed to perform the play, working with the director, actors, and design team to define the historical setting and contextualize language.

For Helou, a scholar of Shakespeare and performance, this kind of theater work is a natural fit. But, it was not always so. When Helou arrived in Santa Cruz, she had never formally studied theater. Throughout her tenure at UCSC, Helou seized opportunities to learn more and build a portfolio that has allowed her to extend her dramaturgy career from Santa Cruz to Los Angeles. She is currently working as a Dramaturg with the Los Angeles-based theater company Collaborative Artists Bloc on a new play, American Saga: Gunshot Medley by Dionna Michelle Daniel. The production will open at Rogue Machine Theater in Hollywood next month and then move to Watts, as a way of bringing Arts to underserved communities.

Helou traces the beginnings of her theater career to her internship at Santa Cruz Shakespeare and the opportunities that graduate work at UCSC afforded her, including a research fellowship from the Institute for Humanities Research. She says, “I felt encouraged at Santa Cruz. I had the sense that my department was very supportive of multi-disciplinary thought and work and public engagement, whatever that might look like.” This kind of open, supportive environment allowed her to experiment with different modes of scholarly engagement. With Shakespeare Santa Cruz, she expanded her role as an educator beyond the classroom and began to see public outreach as part of her research profile. Helou reflects, “I was conscious of shaping my career as a ‘scholar-practitioner’ and Santa Cruz is really a place where this kind of work can thrive.”

Her summer internship also transformed scholarship, turning her into a Shakespeare scholar. As Helou’s work in theater has grown, so has her understanding of Shakespeare as the opportunity to work with his plays on stage affords a new form knowing. Helou explains, “Every time I go back and work on one of these plays, even when they are plays I think I know very well, I discover something new. Even if I have taught them, written on them, things still look different when they are voiced and embodied.” She brings this knowledge back to her scholarship, enriching her writing beyond the plays as text.

The skills she has developed also enrich her work outside academia. As Helou continues to write and teach, she also works to connect theater to new communities. Gunshot Medley: Part 1 opens in Hollywood on September 8. The company continues to raise funds to support the planned move to open in Watts.