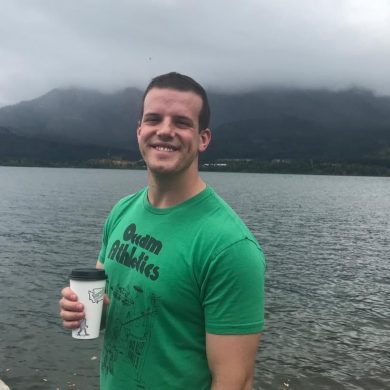 Ben Eischens is a PhD Student in the Linguistics Department at UC Santa Cruz. As a researcher of phonology, Eischens examines how sound structure produces meaning in language. This year, he was selected as a THI Summer Research Fellow.

In January, we spoke with Eischens about his current research and the importance of engaging lesser-studied languages within the field of linguistics. We discussed recent developments in the discipline and the ongoing language revitalization efforts of indigenous communities. We also learned about the continuing impact Eischens’ time as a THI Summer Public Fellow has had in his work.

Thanks for taking the time to speak with us Ben! To help ground our conversation, would you mind just telling us in broad strokes about your work?

Thanks for having me! So I’m a PhD student in linguistics, which is the scientific study of human language. Broadly speaking, linguistic research is concerned with the structure of language. This covers a lot of different topics, some (but not all) of which are how sounds are combined to form words, how words are combined to form sentences, how linguistic meaning is represented, or what’s going on when we produce and hear speech. My research focuses on phonology, which is the study of the sound structure of language. I primarily do this research through working with speakers of a variety of Mixtec, also known as tu’un savi (‘language of the rain’). Mixtec languages are spoken mainly in Oaxaca, Guerrero, and Puebla, but also by migrant communities throughout Mexico and the US.

You describe your interests as lying in “phonology and its interface with phonetics,” particularly in the languages of Oaxaca. For those of us unfamiliar with these concepts, can you give us a sketch of what this interfacing is? How would you describe it to folks outside the field of linguistics?

Phonologists try to understand the abstract mental representations that people use when speaking and listening to language, and these representations are often thought of as being pretty clean-cut. But there’s a lot of variation in how people speak, whether it’s how they pronounce a word or whether they’re speaking carefully or casually. So there’s a bit of a disconnect between the abstract knowledge about sound patterns, which is generally the realm of phonology, and what goes on in the actual physical production and perception of speech, which is generally the realm of phonetics. Doing research at the interface of phonology and phonetics means trying to understand how phonology and phonetics are connected — how do we get from super messy and variable pronunciations of individual words to more unambiguous mental representations of sound? It’s a big question, and one that I doubt I’ll ever have the answer to, but my goal is to get us a little closer to answering it.

Part of your work focuses on San Martín Peras Mixtec (SMPM), a language primarily spoken in Oaxaca. It seems clear you feel that this focus has a great deal to offer linguistic theory. How does studying this particular language challenge norms in the field of linguistics? Or is it, rather, more that it helps refine certain paradigms within the discipline?

Generative linguistics is a relatively young field, and for a long time it focused mostly on a handful of languages, like English, French, and German. The theories that came from that work were meant to help us understand how all of human language worked, though. In fact, there’s a funny line that I’ve encountered a couple times in reading older linguistics articles that goes something like this: “This analysis of the data accounts for the facts in English and French (and, presumably, all other languages)…” But there’s such a huge amount of differences between languages that those frameworks have often had to undergo some serious revision in order to account for patterns in other languages. In my research, I try to push that process along in part by studying phonological patterns in San Martín Peras Mixtec and thinking about what those patterns mean for popular frameworks of linguistic analysis. 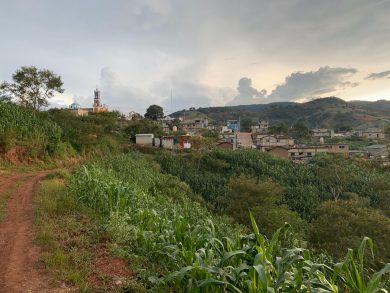 Ahuejutla, a town of about 1,000-1,500 in the municipality of San Martín Peras in Oaxaca, Mexico (Photo by Andrew Hedding)

I also think it’s incredibly important both within and outside the field of linguistics to recognize that indigenous languages have immense value and are spoken by millions of people across the Americas. This is critical to recognize especially in the United States in general and California in particular, where the government attempted to eradicate the use of Native American languages by forcing Native American children to attend inhumane, English-only boarding schools. Many communities like the Amah Mutsun Tribal Band—whose traditional territory includes Santa Cruz—are carrying out on-going language revitalization efforts. You can read about the Mutsun language and revitalization efforts here. So an important part of studying Mixtec, which is spoken by many indigenous Oaxacan immigrants in California, is to raise awareness of the fact that many of our neighbors speak indigenous languages, and that such languages are every bit as beautiful, valuable, and important as languages like English or Spanish. That’s why I’m a part of Nido de Lenguas, a group of linguists here at UCSC that partners with Senderos, a non-profit organization in Santa Cruz, to share the beauty and value of Oaxacan languages.

This year, you were selected as a THI Summer Research Fellow. Obviously, the pandemic has forced a lot of changes in plans over the last year. But what did you work on during that period, and what have you been thinking about since?

It certainly has been a bit of an adventureǃ My colleague Andrew Hedding and I had planned to travel this last summer to Ahuejutla, a town of about 1,000-1,500 in the municipality of San Martín Peras in Oaxaca, Mexico, where the variety of Mixtec that we study is spoken. We visited in 2019 for a couple of weeks and were excited to return to continue work there, but COVID prevented that. Luckily, I was able to continue working digitally with a couple of people in the Monterey Bay area that speak the language, thanks to equipment I bought with funds from the Summer Research Fellowship. So even though logistics looked quite different, and even though there was a lot of troubleshooting, I was still able to do a good amount of research this summer!

During the 2018-2019 cycle you worked with the Pacific Collegiate School as a  THI Summer Public Fellow. Can you tell us a bit about this experience? How has it continued to shape your thinking as you’ve progressed through your program?

Definitely! Before I came to UCSC, I was an AmeriCorps member for two years with a college access program. I wanted to continue working in educational equity, so I applied to work as a THI Public Fellow with Pacific Collegiate School. There, I researched and developed a set of recommended practices for the school to take up to support first-generation students—students whose parents do not have a college degree—throughout their high school career. The following year, I had the opportunity to participate in CITL’s Graduate Pedagogy Fellows Program, and this year I’m leading a department-internal TA training course. All of these experiences have really helped to galvanize my growth as an educator, and I’m very grateful to have had these opportunities.