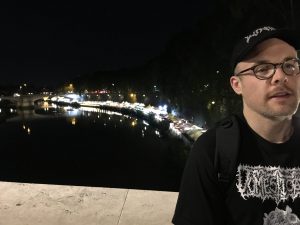 Daniel G. Butler is a third-year History of Consciousness PhD student at UC Santa Cruz, and the recipient of a 2019 THI Summer Research Fellowship. A practicing psychotherapist, Butler’s work looks at psychoanalysis and politics, or “psychopolitics,” particularly in relation to current events and power relations in the US.

We spoke with Butler about life as a graduate student on campus at UC Santa Cruz, Butler’s work on child detention at the US border, temporality in migration, and how Butler’s work as a therapist interacts with his academic research.

Applications are now open for THI’s 2020 Summer Research Fellowships: the deadline is February 21, 2020.

You’re a third-year PhD student in the History of Consciousness program at UC Santa Cruz. Can you tell us about your research this year? Where are you, what are you pursuing, and how have the first two years of classes and research–and the changing political state in the US–influenced your path to this point?

Right now I’m preparing for my Qualifying Exam, revising articles for publication, practicing as a psychotherapist (a second job without which I couldn’t do my research), and trying to support the COLA campaign on campus. Students at UC Santa Cruz (and beyond) are conducting important research, but it’s incredibly hard when struggling to live on a Teaching Assistant’s salary (or even a fellowship). This needs to change, and hopefully it will. In the meantime, I’m in a program with brilliant faculty and students, where I can receive the intellectual support necessary to pursue a transdisciplinary project. History of Consciousness transforms established disciplines by contesting them, and I’m proud to be part of that legacy. History of Consciousness also attracts political visionaries, which is another reason I take pride in identifying myself among its ranks.

Fact checking liars won’t change much politically but contesting monopolies on which their “truths” are based will.

In the past two and a half years, I’ve taken classes in many departments with similarly brilliant instructors and students, although most of my classes were in History of Consciousness. The combination of continental philosophy, critical and cultural theory, and a longstanding penchant for psychoanalysis and psychopolitical thought make History of Consciousness a program like no other. The program is built on a struggle against the notion that any field or discipline has a monopoly on truth. Fact checking liars won’t change much politically but contesting monopolies on which their “truths” are based will. Every epoch demands the critique and challenge of institutions that ground spurious claims to “truth.” The History of Consciousness mascot, the Sphinx, symbolizes such a challenge. For psychoanalyst Wilfred Bion, the Sphinx is the one who questions, who goads our desire for knowledge, and who therefore embodies revelation and revolution at once. Be like the Sphinx – I guess that’s what I’m learning.

Last year you were awarded a THI summer research grant to examine “Forced Migration and the Psychopolitics of Resignation” in relation to the caging of children at the Mexico-US border. In layperson’s terms, can you sketch out the subject matter you’re working with? What are “psychopolitics,” and what do you mean, or mean to interrogate, by “resignation”? Is resignation a mood/emotion, a political state, or something else?

Broadly speaking, my research looks at how pediatric and psychoanalytic theories of child development emerged as a response to global political crises of the twentieth and twenty-first centuries. As a psychopolitical thinker, I’m interested in the relationship between psychic life and political subjectivity; conscious and unconscious fantasy shapes the world of politics, but political ideologies and social structures shape fantasy in turn. This bi-directionality of psyche and politics is the object of psychopolitical inquiry.

…conscious and unconscious fantasy shapes the world of politics, but political ideologies and social structures shape fantasy in turn.

When tracing the history of developmental theories, I use a number of similar yet discrete terms: deprivation, hospitalism, and, to return to your question, resignation. All of these terms evoke extreme states of withdrawal in children, and all of them have political histories. Resignation comes from resignation syndrome, a condition that until recently was exclusively diagnosed among refugee children in Sweden. The title for my dissertation, A Child is Being Caged, nods to works by Freud and psychoanalyst Serge Leclaire, but its original inspiration is Georgi, a child with resignation syndrome who’s featured in a well-known New Yorker article by journalist Rachel Aviv. When asked to describe his experience of resignation syndrome, Georgi replied (and I paraphrase), ‘it’s like being trapped in a glass cage, where any move could kill.’ While I’m interested in what Georgi can teach us about resignation syndrome, I’m also interested in how his description might intuit something about the psychopolitics of childhood today.

Your research relates directly to the material conditions of humans subject to political and social violences. A recent UCHRI essay, “Poor Theory in Three Movements,” explores the relevance and use of theory in thinking through human fragility. In that essay, Diren Valayden states in relation to forced eviction:

The fragility of human life against forces that appear (in discourse and ideology) as unstoppable—Fate, Nature, War—is something long apprehended in places where disasters along the human-nature spectrum are experienced not as events but as conditions of life. Where catastrophes have ceased to be ruptures and are instead, as Hugh Raffles argues, the “everyday state of attrition,” social life is experienced as “a persistent teetering on the brink” (210)… This is the social defined by and constituted through temporariness and incompleteness.

How/does your work consider the temporal aspect of the conditions of border detention, and its context in a longer journey involving precarity, temporariness, and intergenerational migration?

I’m curious about this idea of “teetering on the brink” as a sociality that’s “defined by and constituted through temporariness and incompleteness.” I wonder if this formulation points to some fantasy of a complete or invulnerable sociality that somehow avoids the brink in question. At the level of material conditions, such teetering is obviously a social fact for some in ways that it’s not for others, and yet it’s not only capital or material incentives that explain the violence that leads to forced migration. There are also racialized, political-theological fantasies of predestination, fantasies of complete and invulnerable sociality, that underpin psychic and political anxieties around border security and its enforcement. Such fantasies are ensconced in xenophobic policies that deny the fragility – and the vitality – of psychic life, which is where a psychopolitical framework becomes useful.

The title for my dissertation, “A Child is Being Caged,” nods to works by Freud and psychoanalyst Serge Leclaire, but its original inspiration is Georgi, a child with resignation syndrome…

Temporality in migration is a very complex topic. Sometimes well-meaning clichés about migration obscure that complexity. ‘Hope for a better life’ is a good example. Hope denotes the orientation to a future that political violence often aims to foreclose, which means that migrants might not be hoping for something as much as they are fleeing from hopelessness. The everyday disastrousness that Valayden elicits involves temporalities that require a language beyond what popular narratives of migration afford. For example, detention or incarceration can generate states of limbo and timelessness, both of which refer more to atemporality than temporality. This would mean that migration can entail various forms of atemporality and what might be called lived non-existence: one can’t exist in one’s own country, but one also can’t exist in the limbo of detention, not to mention the limbo of waiting to be detained. The placelessness and timelessness of lived non-existence seems to exceed the precarity of “living on the brink,” but I’d have to read the whole essay to get a better sense of Valayden’s (clearly compelling) ideas.

Valayden goes on to state:

“…states of attrition are also about the new configuration of organized political violence when the centralized monopoly of force begins to fade away. Contemporary state-making increasingly takes place in and through temporariness. Notice the proliferation of temporary structures (refugee camps, processing centers, checkpoints, concrete barriers, extra-territorial passport control) that govern human circulation.”

In your previously published work you’ve discussed the psychopolitics of space. Are you interested in the physical and organizational spatial aspects of border detention in your current research? Or are you looking primarily at emotional, psychological spaces?

Many patients, especially those prone to anxiety, need a lot of help feeling like the clinic is a place that can contain the very intimate work of psychoanalysis.

Contemporary strains of psychoanalysis are interested in what might be called the ‘equipment’ of psychotherapy, or in the construction of a setting rather than the presumption of a setting that is already there. As a psychotherapist, I can tell you that the patient who immediately lies on the couch and free associates is somewhat of an anomaly. Many patients, especially those prone to anxiety, need a lot of help feeling like the clinic is a place that can contain the very intimate work of psychoanalysis. In this sense, the establishment of an external setting promotes growth; my patient learns to trust me enough to help them learn about their mind. Border structures, however, promote death. Children aren’t just separated from caregivers; they’re separated from nonhuman transitional objects and so on. Without someone or something to help me when I confront the timelessness of my unconscious – timelessness being one of the characteristics of the unconscious that Freud identifies in The Interpretation of Dreams – I’m more likely to fragment and enter a psychotic or dissociative state of lived non-existence. That’s why, rather than temporariness, I view borders as sites that induce a devitalizing sense of timelessness or atemporality in people who the state deems its enemies.

Thank you for your support and for taking an interest in my research.