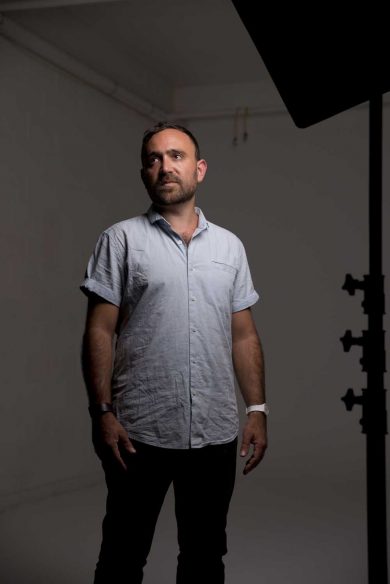 Gabriel Mindel is a PhD Candidate in the History of Consciousness Department at UC Santa Cruz. He locates his work within the emerging field of Sound Studies, and examines “the relationship between noise, power, and protest.” This year, Mindel was selected as a THI Summer Research Fellow.

In February, we sat down with Mindel to hear more about his current research projects and experience as a THI fellow. Among other things, we learned that he draws from his personal history as a musician and activist in his scholarship in order to think about the stakes of theorizing noise as a political category. We also discussed how his previous experience as a THI Summer Public Fellow inflects his approach to his work and thought.

Thanks for taking the time to speak with us Gabriel! To help ground our conversation, would you mind just telling us in broad strokes about your work and research interests? How do you think about your scholarship?

Currently my focus is on the relationship between noise, power and protest. I think we all intuitively understand that protest is about power and that protests are noisy, but I’m interested in listening beyond the common sense experience of noise and protest and asking how noise indexes power, how it works on us affectively and what it does politically. Doing this is meant to open up a different kind of access to how we understand power and its expression, while also intervening in the emergent discourse around audio politics and the theorization of noise itself. That said, I’m intellectually promiscuous, perhaps to a fault, which means that my interests range across disciplines and fields without a lot of concern for boundaries and norms. This is partly the influence of my background as an artist and composer where I was often testing political theory through artistic research creation. Though my dissertation doesn’t necessarily enact that practice, the kinds of materials I’m paying attention to in my research are performances, artworks and recordings that exemplify this principle: that art and performance are a meeting of theory and practice, and that we can think with them beyond the limits of theory alone.

Your current project, “Profanity: Performance and the Abolitionary Politics of Noise,” sounds really innovative and interesting. Can you give us something of an overview of what you’re working on here? How did this particular project come about?

This project came about because I was unsatisfied with the common definitions of “noise” which historically have had mostly derogatory orientations. Noise is allegedly “unwanted” or “ugly” or “meaningless” or “non-musical.” As a musician and an activist I have had decades of first-hand experience that tells me these qualitative assumptions are not necessarily true, and that denoting something as noise is a fundamentally subjective process. I wanted to develop a theory of noise that deals with the indeterminacy of answering the question “what is noise?” by asking instead “what does noise do?” The answers are more phenomenological than anything, as noise disrupts our attention and disorients us, in ways that are not inherently good, but that have the capacity to open spaces of what Ashon Crawley calls “otherwise possibility.” It is in the production of experience of otherwise worlds that noise is most emancipatory, but as I’m sure most readers are already thinking, there are no guarantees that the worlds it makes possible are the ones we want, and what can be mobilized for liberation can just as easily be used as a tool of repression. 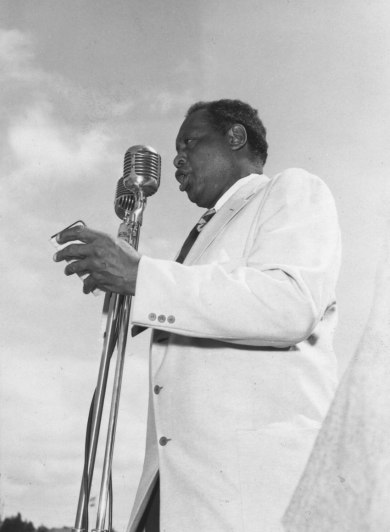 I’m choosing to look at moments when noise makes possible transformations that I’m desirous of. In particular I’m looking at historical events where the noise produced can give us access to thinking differently about contemporary issues that, though they have long histories, have erupted in controversy in the years of my PhD: borders, free speech, monuments, prisons. By way of example, I’m writing on a concert given by Paul Robeson, the great singer, actor, orator and political activist who was barred from entering Canada by the U.S. government as punishment for his work against Jim Crow, U.S. imperialism and war against the Soviets. He performed his concert on the edge of the border with audiences from the U.S. and Canada intermingled, his voice travelling across a border that the rest of his body could not. Here his voice is figured as noise, obviously not because it is seen as ugly or unwanted by his audience, but because it acted to disrupt and disorient the ordered logic of the border’s materiality, demonstrating the immaterial unreality of the nation state, an imaginary concept that relies on violence or the threat of violence (in his case incarceration) to convince us to treat it as a reality. If we can let go of noise as naming bad sounds, we can start to hear it as a productive sound that creates possibilities by breaking the codified and prescribed soundscape of whatever powers dominate and define our world.

Your work engages some really important questions embedded in recent conversations about abolitionist thought, freedom, and politics. How does the field of Sound Studies allow us to think differently about these?

Sound Studies is an interdisciplinary field which means that its name tells us more about the object of its study and theorization than it does about how that study or theorization is being conducted. On the one hand it has created a space where people with radically different disciplinary backgrounds – ranging across STEM, humanities, art and social sciences – can produce knowledge together and offer up new ways of working within these traditional academic frameworks. On the other hand it has quickly developed its own concerns, discourses and debates that are attempting to shape the discipline even while often trying to expand it to include thinking beyond its mostly European and masculine foundations. People writing within sound studies are also making important interventions into how we think critically about race, gender, disability, ethnicity, nationality and sexuality.

I believe that Sound Studies is aligned (or should be) with other undisciplined approaches to knowledge, in particular Black study, queer studies and Latin American studies which have always included considerations of musical performance, media technology, voice and acts of listening. In fact, I think the more traditional a discipline is, the more likely it is that Sound Studies is treated as a novel approach whose value is that it offers different ways of thinking about well trodden material (I’m thinking of, for example, UCSC Literature professor John O. Jordan from the Dickens Project who wrote a wonderful essay using a sound studies approach to open up new ways of understanding a fairly widely covered author). Many more recently developed fields have consistently thought through sound, sonic media, and listening as necessary epistemological practices. Given that many of these fields are actively pursuing questions around abolition, freedom and politics, it signals that there is something in the study of sound that is a resource for this work and that it’s up to us to listen for it.

This past summer you were selected as a 2020-2021 THI Summer Research Fellow. To be sure, COVID complicated everyone’s plans, but what have you been working on and thinking about over summer and since? 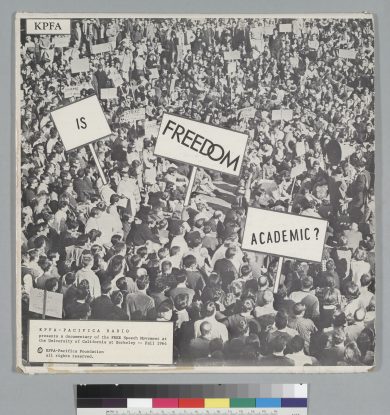 I’m working on a chapter about Free Speech, inspired in part by events at UC Berkeley in the 1960s when students surrounded a police car in the middle of an arrest and transformed it into a speaker’s stage for over 24 hours, and also by the various ways the movement this event launched has been commemorated, interpreted and appropriated, culminating in a volatile protests against a right wing speaker in the same location in 2017. I’m trying to test my theories about noise against free speech, speech being in many ways our first mode of sonic protest. The fight over speech is a political conflict that refuses to be resolved, but I’m making an argument about what we’re arguing about when we argue about free speech that I think is useful. I had been preparing last summer to do a lot of work in the Bancroft Archives which, as you can imagine, have extensive holdings on the 1960’s Free Speech Movement, but COVID made this impossible. Thankfully Bancroft has digitized a great deal of their materials, including audio recordings of speeches and events, all of which allowed me to still conduct research. What still wasn’t possible was the kind of serendipitous discovery that many researchers hope for when they’re in the archive. Ideas can be radically shaped and transformed by simple material artifacts, or by marginal texts that weren’t deemed important enough to scan, transcribe or digitize. I also had many questions that couldn’t be answered by what is on the web, which forced me to do other kinds of research, ask different questions, and changed the scope of some of my project. I’m grieving this missed opportunity, but I was still afforded time to research, write and think that was invaluable.

In 2019 you were a THI Summer Public Fellow with Indexical. As you’ve continued on in your program since, how does this experience continue to inflect your approach to your studies and thinking more generally?

My work absolutely continues to inflect my work as a graduate student. I still believe that art, music and performance produces knowledge and that my own work needs encounters with these practices to be enlivened and rigorous. Like many performing arts organizations, Indexical was hit hard by COVID and the inability to host in-person concerts for their audience. They pivoted and still managed to present live streams on Twitch, release albums, and were virtual hosts to Moor Mother, maybe the most important contemporary musical artist today, as part of Beyond the End of the World. Indexical and I still share a commitment to developing humanistic practices within the world of experimental music, and I’ll be collaborating with them on a project in the coming year that includes public conversations between artists, writers and thinkers.