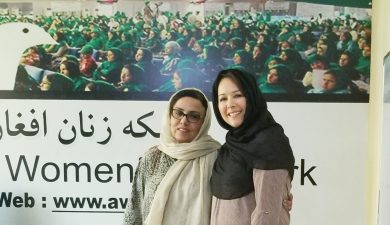 Halima Kazem Stojanovic is an investigative journalist, documentary filmmaker, and PhD student in the Feminist Studies Department. She brings a wealth of expertise to her academic work at UC Santa Cruz, having spent more than 12 years reporting from Afghanistan for major media outlets (including The Guardian, Al Jazeera, and PRI) and conducting research on human rights violations for Amnesty International, Human Rights Watch, and the United Nations. She currently teaches journalism and human rights at San Jose State University.

Kazem Stojanovic was awarded a 2019 THI Summer Research Fellowship to conduct interviews with Afghan historians, professors, government officials and activists traveling through Dubai. THI caught up with Kazem Stojanovic to learn more about her research on feminism in Afghanistan, previous experiences as a reporter, and plans to share her scholarship in the future.

Can you start by telling us about your research on feminism in Afghanistan? What have you found especially interesting about Afghan feminist resistance?

My research is a genealogy of feminism and specifically feminist resistance in Afghanistan. Most Americans learned about Afghan women’s lives in the late 1990s when the extremist Taliban militia group governed Afghanistan and banned women from public life or after 9/11 when the US war in Afghanistan was predicated on “saving Afghan women.” My research was born from these two periods and takes a critical look at who wrote and continues to write history, ethnography, and other scholarly work on Afghanistan. I take a critical approach to analyzing these texts and centering women’s lives in various historical periods and places. It is important for me to do this work by applying various feminist methodologies and theories. For a variety of reasons—including Afghanistan’s geography, entanglements with various empires, regimes, geopolitics, and conflicts—Afghan women have developed and embody a divergent form of feminism which includes new definitions and articulations of what resistance is and can be.

Afghan women have developed and embody a divergent form of feminism which includes new definitions and articulations of what resistance is and can be.

What can you share from the interviews you conducted during your THI Summer Research Fellowship in Dubai?

Thanks to THI’s Summer Research grant program and another grant I received from UC Santa Cruz, I was able to conduct a series of in-depth interviews with Afghan women activists, government officials, journalists, lawyers, and others. I am grateful to all of them for the time they gave me — they all had incredible and unique stories. My research is deeply rooted in their lived experiences and told in the form of oral histories. I recorded all of my interviews because as a journalist and filmmaker I care about what feminist scholars call feminist empiricism and situated knowledge.

What has motivated your research in the Feminist Studies department? How does your scholarship build on your extensive experience as a journalist and human rights reporter in Afghanistan?

Kazem Stojanovic interviewing a man on the street in Afghanistan.

I was born in Kabul a few months before the 1978 Communist Coup, which was the start of 40 years of war and conflict in Afghanistan. My family was one of the lucky ones that made it out before the heavy fighting started. I wasn’t able to return to Kabul until six months after 9/11 when I went back to report on the US war and the Afghan rebuilding efforts. During this time, I traveled throughout the country and covered a wide range of issues including government negotiations with the Taliban, amnesty laws that protected war criminals, US policies in the war with regional militias, and ongoing human rights violations. As a woman reporter who spoke the local languages, I was able to spend time with women and understand their views on all of these issues and how their daily lives were affected. Each had unique stories and insights that I thought were not reflected in the history I had read about Afghanistan and continued to read in the post 9/11 surge of books and writing about the country. I developed a deep desire to write about Afghan women’s lives, which I did for news organizations and human rights organizations including Human Rights Watch, Amnesty International, and the United Nations. I also co-produced a feature-length documentary about the first woman who ran for president in Afghanistan. I pursued the Feminist Studies PhD at UC Santa Cruz specifically to build on this work and learn about feminist histories, methodologies, and theories

At The Humanities Institute, we are committed to engaging the broadest community possible in Humanities scholarship. How have your experiences as a reporter prepared you to communicate complex research to diverse audiences?

As a woman reporter who spoke the local languages, I was able to spend time with women and understand their views on all of these issues and how their daily lives were affected.

As an investigative journalist and filmmaker for almost 22 years, my work has always been for the public and I’ve learned to package information in different ways for different audiences. I can’t help but apply this way of doing things to my PhD work. At first, I thought this would be a problem and wouldn’t be perceived as “scholarly,” but the Feminist Studies faculty were supportive of my empirical training and encouraged me to lean on these strengths. That is why my PhD dissertation will be the first to include a feature-length documentary film as part of my dissertation.

It is important to make our research accessible to the public. In my work in Afghanistan and in other countries, I see how inequitable access to information and education has led to continued disenfranchisement of vulnerable populations. That is why I am committed to producing and translating my work in the local Afghan languages and hope my scholarship will be useful to Afghan women.