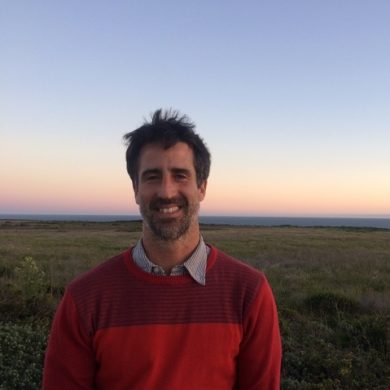 Jose Antonio Villarán is a PhD Candidate in the Literature program at UC Santa Cruz, and part of the Creative-Critical Concentration in that department with a Designated Emphasis in Critical Race and Ethnicity Studies. His academic interests bring together Creative Writing, Poetics, Cross-Genre Literature, Translation Studies, US Latinx Literature, Bi-lingual Literature, and Critical Race and Ethnicity Studies. Jose is a 2019-2020 THI Graduate Student Success Peer Mentor and the recipient of a 2018-2019 THI Summer Research Fellowship.

THI spoke with Jose in June to learn more about his research and dissertation work on a “cross-genre literature project,” and breaking down the binary of scholarship and creative work. We also spoke about the strangeness of talking about and carrying on PhD research in this current moment in US history.

Thank you for agreeing to this interview during a challenging time in the US, and in the world.

Yes, I would like to first take a moment to acknowledge that I’m writing these words in the middle of a global pandemic that has taken hundreds of thousands of human lives. And that right now, people across this country (and the world) are out in the streets protesting to put an end to police brutality and systemic racial violence against Black folks, outraged by the recent deaths of Ahmaud Arbery, Breonna Taylor, and George Floyd. Furthermore, that in our own university, several of our fellow students have been dismissed or suspended from their appointments, have lost their healthcare and income, and are facing student conduct charges, just for exercising their right to demand a fair and dignified living wage. It’s not an overstatement to say that the UC Santa Cruz community is in pain right now, and I wanted to acknowledge that, because the gravity of this moment makes everything else feel almost secondary.

Thank you for acknowledging this wider context.

You’re in the creative-critical concentration in the literature department at UC Santa Cruz, and your designated area of emphasis is Critical Race and Ethnicity Studies. Can you tell us more—how does your work combine questions of race and ethnicity with creative writing? How do US Latinx and bilingual literatures feature in your research?

The “Open Pit: A Story About Morococha and Extractivism en las Américas” is a bilingual (English/Spanish) cross-genre literature project that weaves together elements of documentary poetry, memoir, epistolary, and field research.

Perhaps the best way to answer that question would be to describe my dissertation. The Open Pit: A Story About Morococha and Extractivism en las Américas is a bilingual (English/Spanish) cross-genre literature project that weaves together elements of documentary poetry, memoir, epistolary, and field research. This “weaving” attempts to represent humanity’s inter-connectedness with the rest of nature and embody the chaotic complexity of the subject matter at hand. The project explores the role of the extraction of natural resources under the current capitalist accumulation model, through the specific story of the town of Morococha, located in the central Peruvian Andes, and the ways in which extraction permeates most aspects of human activity in the Americas, as in the rest of the world. The project is conceived as an assemblage of collective enunciations and woven through a letter to my seven-year-old son, in an attempt not only to connect the world of mining and extraction to everyday life in the industrialized north, but also to my own personal history growing up in Lima, Perú, and my current experiences as a graduate student in the humanities and as a co-parent living in California.

Like other PhDs in the creative-critical stream, you’re also a writer. What topics are you drawn to in your own creative work, and what genre(s) do you write in? Any formal interests you’d like to share? Favorite writers or artists?

I think of my scholarship and my creative work as different modes of intellection and inquiry within a broader process of creation.

This might sound a bit gimmicky, but I don’t really make a clear distinction between my work as a scholar and my work as a writer. I think of my scholarship and my creative work as different modes of intellection and inquiry within a broader process of creation, and furthermore, I’m particularly interested in interrogating the implications and limitations posed by such binary categories. As a matter of fact, this is one of the reasons why I found the Creative-Critical Concentration in the Literature Department so appealing, because I felt that it offered a space within the academy to explore such questions. The fact that students in the concentration can present a dissertation which can take the form of a novel, or a collection of poems or short stories, etc., accompanied by a critical introduction that frames the project, speaks to the program’s invitation for students to interrogate traditional categories of academic knowledge production. 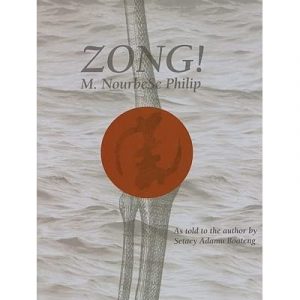 That being said, I’m told I write poetry, and I do feel like a writer of poetry, although I also feel like it’s more complicated to classify the work I’m currently doing under any specific genre or label, even one as encompassing as cross-genre literature. What I can say is that I gravitate toward artists and scholars who are interested in exploring the liminal, the edges, the borderlands. Books such as The Book of the Dead, by Muriel Rukeyser Coal Mountain Elementary, by Mark Nowak, greatly informed the writing of my dissertation. Both of these books serve as important points of reference because they work through the “official” historical accounts in order to re-record the events that led to specific mining and industrial disasters. Rukeyser and Nowak attempt to provide a voice to the underrepresented and oppressed, as well as to create an alternative history that stands in stark contrast to the obvious allegiance of the “official” account with the interests of capital and profiteering. In a similar way, the Open Pit presents the verbatim testimonies of the residents of Morococha, gathered during my last two visits: in August 2014 and September 2018, in the attempt to create a different narrative that can stand in contrast to the “official” account purported by the Peruvian government and most national media outlets. Zong! by M. Nourbese Philip and ANTI-HUMBOLDT by Hugo García Manríquez have also been crucial to the writing of my dissertation.

Your academic research is, you write, a response to the call “set forth by literary and environmental scholar Rob Nixon in Slow Violence and the Environmentalism of the Poor, for writers to imagine new ways “to devise arresting stories, images, and symbols adequate to the pervasive but elusive violence of delayed effects”.” What is the “elusive violence of delayed effects”? How does your work, specifically, approach such violence?

The “elusive violence of delayed effects” refers to the social and environmental impacts brought about by the extraction of natural resources (and related activities). Extractivism can be thought of as large-scale mineral extraction by private transnational or state-owned companies, protected by the state from local accountability to the impacted populations. However, it also includes other activities beyond mining, such as the extraction and exploitation of fossil fuels, hydrocarbons, large-scale monocrop agriculture, and others. 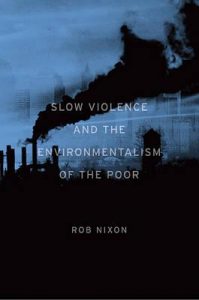 Whether it’s fracking natural gas in North Dakota, or informal gold mining in Madre de Dios, extractivism has a direct impact on the inhabitants of this planet. The current capitalist accumulation model depends on the relentless exploitation of natural resources and usage of fossil fuel, creating a situation in which the impact of human activity is triggering climate related changes on a global scale, putting a large number of species in real danger of extinction. At the same time, the violence of extraction and fossil capital is often not seen or perceived by those enjoying the benefits; it is “dispersed across time and space”, perpetrating “a slow violence”[1] usually exerted on the less privileged peoples of the world, a violence which is challenging to represent. It is difficult to convey a sense of urgency about the current situation because the consequences of our actions are not immediately visible or perceivable. The Open Pit speaks to this challenge of representation. It focuses on the town and the story of Morococha, whose residents were forcibly relocated because of the town’s proximity to a large copper deposit.

You also draw on historical geographer James Moore in your work, and his idea of the “web of life.” Can you tell us more about that idea? What is it, in more detail, and how do you engage with it in your research?

The work of environmental historian and historical geographer James Moore, and more specifically, his conceptualization of a double movement, “of capitalism through nature, of nature through capitalism”[2], which he defines as a Double Internality, has been extremely useful for my own dissertation project. Moore speaks of “capitalism as a world ecology,” which means that the economy and the environment are not independent from each other. He even goes further and argues that capitalism can be thought of not as an economic system or a social system, but rather as a way of organizing nature itself. In this sense, everything that humans do is already joined with the rest of nature, and nature as a whole includes everything humans do.

Which indigenous knowledges are you bringing to the fore, alongside the frameworks of Nixon and Moore, in your work?

In Protecting Indigenous Knowledge and Heritage, Mari Ann Battiste and James (Sa’ke’j) Henderson provide an encompassing study of Indigenous Knowledges around the world, that serves as an important point of reference for this project. And as they argue in their book, Indigenous Knowledges is not a “uniform concept across all Indigenous peoples,” and is perhaps more accurately regarded as a diverse knowledge that is found in many different groups of people. They also argue that Indigenous Knowledges are an intrinsic part of the community, of the group, of the individual, and therefore they “cannot be separated from the bearer to be codified into a definition.” 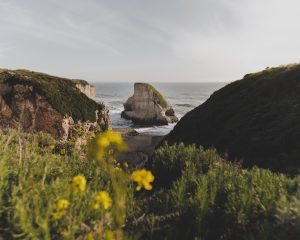 From my understanding, Indigenous Knowledges advocate for a sense of interconnectedness between humanity and nature, which also implies a vastly different relation between both. Alberto Acosta’s concept of “sumaq kawsay,” or “living well,” which is of course built upon Indigenous Knowledges, is perhaps an example of this potentially different relation between humanity and nature. Living well constitutes an alternative to the traditional notion of development predicated by organizations such as the IMF and the World Bank. It also means the decommercialization of nature, and the eradication of models and practices that revolve around the exploitation of nature.

I would also like to add that in my opinion, the work of scholars such as Nixon and Moore is greatly indebted to Indigenous Knowledges and peoples around the world, who have been advocating and arguing and articulating similar concepts since way before their first encounters with Western civilization, hundreds of years ago. The work of Marisol de la Cadena, Cecilia Vicuña, Walter Mignolo and Stevano Varese has also been crucial in the development of my dissertation project, so I wish to acknowledge their influence as well.

[1] Nixon, Rob. Slow Violence and the Environmentalism of the Poor. Harvard University Press. 2013.

[2] Moore, James. Capitalism in the Web of Life: Ecology and the Accumulation of Capital. Verso Books. London & New York. 2015