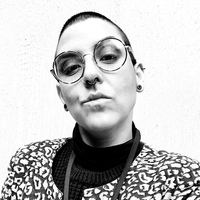 Krizia Puig (they/them) is a second-year Feminist Studies doctoral student at UC Santa Cruz, where they also work as the Program Coordinator at the Disability Resource Center, and as a researcher/artist for the Critical Realities Studio (Art & Design: Games + Playable Media). They are also the co-founder of the Queer Futures Collective. Krizia’s work explores issues related to affective robotics and space exploration, focusing on the study of future Mars settlements through frameworks that include feminist studies, disability studies, and the natural sciences.

This fall, THI spoke with Krizia about the research they carried out this summer for their project: “Martian Matter(s): Accessibility, Sustainability, & The Im/possibilities of Space Exploration.” Krizia is the recipient of a 2019-2020 THI Summer Research Fellowship.

Your research sounds, literally, out of this world. You received a grant from THI this summer to work on matter and the colonization of Mars. What can you tell us about this work?

Thanks to a summer fellowship from THI, I had the opportunity to do research at the Kennedy Space Center (NASA-Cape Canaveral) during the celebrations of the 50th anniversary of the moon landing this past summer. This experience was indispensable for me to continue working on my current theoretical-performative project “Martian Matter(s): Accessibility, Sustainability, & The Im/possibilities of Space Exploration”—which might turn into my dissertation.

I’m undertaking an experiment to measure the worth of “the in/sane” in practices of future making—specifically, within the space sciences. My work centers the study of the “Mars Fevers” through entanglements among Nikola Tesla, Verner Von Braun, and Elon Musk. These elusive connections are traced using adaptations of scientific apparatuses that I transform(ed) into machines to write experimental theory about the future(s) of space exploration.

In conversation with the inventors’ speculative and scientific work, I intertwine crip technoscience, posthumanist theories, astronomy & astrophysics, performance studies, critical race & ethnic studies, ecocriticisms, and robotics to take up the challenge of experimenting with the potentialities of what have been deemed to be an impossibility: an accessible and sustainable “model” for space exploration that might exist in resistance to, escaping from, and/or alongside the practices of exploitation, extermination, and dispossession that characterize terraforming projects.

PhDs in Feminist Studies were the ones who “truly” wanted me: in all my complexity.

How did you end up interested in a sort of speculative metaphysical astronomy project like this? What fields, thinkers, and questions are you drawing on for it?

SpaceX’s autonomous spaceport drone ship “Of Course I Still Love You” is the link between the research about sex robots I have been doing since 2015, and my current work about the future(s) of space exploration. Named after a spaceship in Iain M. Banks’ novel “The Player of Games,” this landing pad shifted the orientation of my research towards the study of “Mars” as a complex phenomenon that allows us to understand the imaginary, technological ambitions, and economic drive of multi-planetary imperialist plutocracies.

Professor Karen Barad’s academic work is the foundation of this project. Their theory of “Agential Realism,” which is a “diffractive reading of Quantum Physics through contemporary theories of social justice” (Barad, 2017) is what has allowed me to develop a method/ology to trace entanglements among seemingly disconnected phenomena existing between the un/knowable, the un/thinkable, and the im/possible. Their brilliant advice, patient wisdom, and kind support has been key in my growth as a scholar during the last year—and was key for me to prepare for my research trip to NASA.

Professor micha cárdenas’ artistic work—and the research we have started to do with an interdisciplinary group of graduate students and professors through the Critical Realities Studio—has also opened my eyes to the potentialities of incorporating playable media in theoretical writing. This space has turned into an enriching laboratory for me to “rehearse” with(in) alternative forms of knowledge production that are considered “not academic enough”  in other environments. 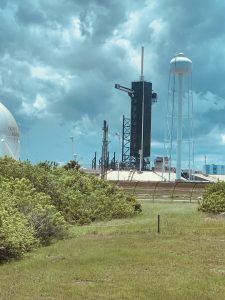 Image of pad 39A taken by Krizia during a tour of the NASA facilities given by Al Worden, astronaut from Apollo 15.

Your work with alternative knowledge forms like these is fascinating. Can you speak more about this—what are some further examples of materials that are “not academic enough?”

Gloria Anzaldúa’s understanding of the bodymindspirit, her practice of performative writing, and the principles of Augusto Boal’s Theater of the Oppressed are existing at the core of this project. Their enseñanzas operate the machines I make.

Until now, I have focused on engaging with legitimate and illegitimate sources about the colonization of Mars (particularly about Nikola Tesla) applying recent discoveries in “Twistrionics” and 2d materials’ superconductivity. “Twistrionics” is a technique considered “2018 Breakthrough of The Year” by the publication Physics World, for its potential to open a “new paradigm for device engineering”—specifically in nanotechnology.  It is a technique to manipulate the electronic properties of 2D materials (those are the materials of the thickness of an atom) by twisting the angles in which two or more of those “layers,” also called “2D heterostructures,” are “stacked” on top of each other. (For more info: Click here.)

“The Mars Fevers” is a phenomena that have been flattened by “history” as a “2D heterostructure.”  To engage with my sources I have adapted a scientific apparatus developed at Columbia University. With it, I build structures about seemingly disconnected historical events that are similar to the structures of those one atom layer materials. Then, I over-impose those layers made of “atom-sources” and tune/twist them to find patterns among them that allow me to write pieces of diverse “page-lengths” in sessions of academic experimental theorizing inspired by Nikola Tesla’s research methodo/logy.

I inhabit many contradictions with respect to Feminist Studies as a field. To be truthful—I knew this university was the place I needed to be, but I was not convinced getting a Ph.D. in “Feminist Studies” was for me. After I finished my M.A. in Women’s Studies, my relationship to womanhood, gender, and feminism changed in profound ways. My research took me to places where feminism is not enough—and my take on certain issues started to be at odds with some ideas that, for many, are at the core of the “feminist canon.” However, PhDs in Feminist Studies were the ones who “truly” wanted me: in all my complexity. I later understood my own reticence, when I realized that my “being at odds with the field” is (actually) the evidence of how entangled I am with(in) it. During the process of applying to different programs, I learned very important lessons about the politics permeating U.S. academia, about the place I (and my work) occupy in relation to those politics, and about the very nature of academic disciplines. This is the field of study that has claimed me, and the questions that constitute me: I would not be a scholar in any other way.

What has this field brought to your work that other fields or departments might not have? 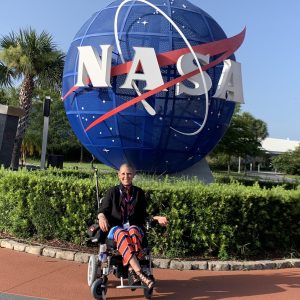 Krizia Puig in front of NASA sculptures at the center of the Kennedy Space Center.

“Feminist Studies” is the only area of study that can contain my research: for the rest, I am always too much. This is the only space where the for many  “too controversial,” “too interdisciplinary,” “too experimental,” “too poetic,” “too disruptive,” character of the forms of knowledge production I propose and practice have been nurtured. But I came to this program after the forest, the water, the words, and the spirits of the people who have changed my life with their academic work—not necessarily after a “Feminist Studies” degree.

For many reasons, I wrestle every day with the inherent contradictions and unbelievable miracles behind such a construct, behind the fact that I am here— doing this. That is why I know I am where I should be. I hold a magical but turbulent relationship with its challenges and potentialities—many of us in this field do. Curiously, I believe that is the reason why we (Feminist Studies and I) keep “choosing each other.” In my essay “The TransAlien Manifesto: Future Love(s), Sex Tech, and My Efforts to Re-member Your Embrace” that will be published in the November issue of the Trans Studies Quarterly, I share some “thoughtfeelings” about this through creative theoretical exercises about knowledge, love, hallucinations, cyborgs, and affective robotics.

What would you like to bring more of to your degree, perhaps from other departments or fields?

I am really excited about what might result from the collaborative effort of conceptualizing bridges for students from our department (and from the Humanities division) to graduate with specializations in the natural sciences. During my time in Cape Canaveral, I became fascinated by the potential of creative adaptations of instrumentation and method/ologies associated with Astronomy & Astrophysics to become apparatuses to write experimental theory across/about multiple spacetimes.

This is the field of study that has claimed me, and the questions that constitute me: I would not be a scholar in any other way.

Since I returned, I have started to work with Professor Raja Guha Thakurta—Chair of the Department of Astronomy and Astrophysics at UC Santa Cruz—in creating a personalized interdisciplinary plan of study that might allow me to graduate with a D.E. in Astronomy and Astrophysics. Besides continuing my work about Mars, I am particularly interested in understanding astronomical spectroscopy and gravitational-wave detection to do something similar to what I have done with twistrionics.

In addition, I am focusing on research about the so called “Latin American Emerging Space Nations” (particularly Brazil, Venezuela, Perú, México, and Argentina)—and in understanding current proposals to “re-colonize” the Tropics based on the usefulness of land near the Equator “for” the space sciences. Professor Guha Thakurta’s openness, validation, and generous dedication might establish a path for students doing “feminist science studies” to gain the scientific expertise we need in a manner that considers the interdisciplinary character of our work, and the fact that most of us lack formal scientific education.

Barad, Karen. “NO SMALL MATTER: MUSHROOM CLOUDS, ECOLOGIES OF NOTHINGNESS, AND STRANGE TOPOLOGIES OF SPACETIMEMATTERING.” In Arts of Living on a Damaged Planet: Ghosts and Monsters of the Anthropocene, edited by Tsing Anna, Swanson Heather, Gan Elaine, and Bubandt Nils, 103-20. MINNEAPOLIS; LONDON: University of Minnesota Press, 2017.