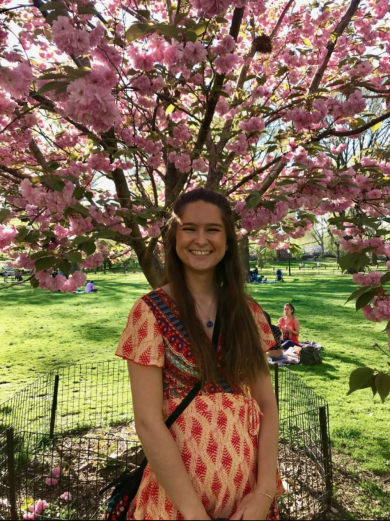 Lex McClellan-Ufugusuku is a PhD Student in the History department at UC Santa Cruz. Her research examines environmental degradation on the island of Okinawa, Japan, alongside arguments for the Shimanchu people to be granted indigenous people status there.

McClellan-Ufugusuku was a 2016-2017 THI Undergraduate Research Fellow. And in 2019, she was awarded the Thom Gentle Endowment for History, an award based in the History department at UC Santa Cruz, made possible by the generosity of Thom Gentle (Cowell ’69, History).

THI spoke to McClellan-Ufugusuku about her time as both an undergraduate and graduate student at UC Santa Cruz, her personal connection to her research, and her work onsite in Okinawa engaging with indigenous activists and elders.

Where did you grow up, or live before coming to Santa Cruz?

I grew up in San Diego and came to UC Santa Cruz right after graduating from high school.

What did you major in on arriving at UC Santa Cruz?

For my undergraduate degree, I did a double major in history and critical race and ethnic studies. I stayed at UC Santa Cruz for my history PhD in order to work with Alan Christy as my adviser.

I feel that I can help more people by working to shape our national policy toward Okinawa and indigenous peoples in general.

Why are you passionate about what you are studying?

My family is Okinawan, and my mother and grandmother came to California in the 80s, when my mother was in high school. I grew up in an Okinawan enclave in San Diego, where there were many other children of mixed race along with a strong sense of Okinawan (as opposed to strictly Japanese) identity. I wanted to dig deeper into this dual legacy, so I was immediately drawn to UC Santa Cruz and the Okinawa Memories Initiative , which was still the Gail Project when I started. My double major in history and critical race and ethnicity studies allowed me to explore both my Okinawan heritage and my identity as a person of mixed race.

Can you share an academic highlight from your time at UC Santa Cruz?

In Spring 2019, I was a TA for class on World War Two in Europe, which is not my concentration at all. I had a really thoughtful and provocative discussion section with my students one day about why we learn some things in high school history and why we don’t know anything about other topics, which translated into a bigger conversation about why it’s important to have a history education that doesn’t just tick the boxes on the GE requirements or the AP test. Seeing them so engaged and passionate about history and having them all participate was really special.

Are there any other, non-academic highlights from your time with UC Santa Cruz that you would like to share?

After I graduated, I met with Shinako Oyakawa, an Okinawan activist who’d just spoken at the UN Permanent Forum on Indigenous Issues (UNPFII18). She asked if I’d like to go, so in 2019, I was able to attend the Permanent Forum myself, representing UC Santa Cruz as part of the Ryukyuan Delegation.

I was able to attend the Permanent Forum [on Indigenous Issues] myself, representing UC Santa Cruz as part of the Ryukyuan Delegation.

What are your post-graduation plans?

I would like to use my research to work at either the Department of State or Defense. I feel that I can help more people by working to shape our national policy toward Okinawa and indigenous peoples in general.

You’re the recipient of a student award from the Thom Gentle Endowment for History, which supports students studying environmental history. Can you tell us about the research you’ve carried out with this award? Why is this scholarship is meaningful for you?

My research looks at the ways in which environmental degradation—resulting from United States military base construction on the island of Okinawa—has contributed to arguments for the Shimanchu people to be granted indigenous people status, which must be designated by the government of Japan. My research converges the seemingly disparate problems of environmental destruction and U.S. military bases with that of indigenous peoples’ recognition, cultural practices, and origin stories. 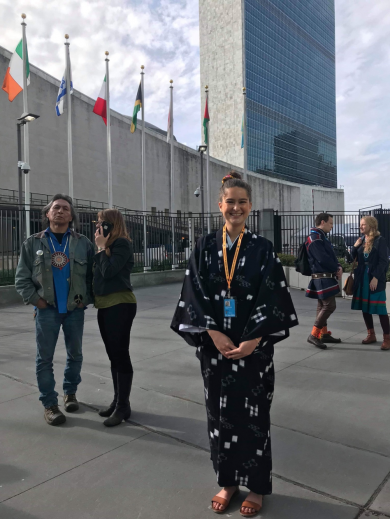 This research requires being in Okinawa to engage with indigenous activists and elders, who have been protesting on site at Oura Bay since 1997. By conducting oral histories with these people, I hope to bridge the gap between the scientific descriptions of environmental degradation with the cultural impact of military base construction on Shimanchu culture, belief practices, and democratic anti-base sentiment.

The money awarded by the Thom Gentle Endowment for History enabled me to buy a plane ticket to Okinawa to conduct this vital research in person. Flights to Okinawa are quite expensive, so my interviews would not have been possible without the help of this funding.