By Lisa Renner for UCSC News

Five years ago, Mario Alberto Gómez-Zamora worked with teen-agers to collect stories from elders in a P’urhépecha indigenous community in Patamban, Michoacán, Mexico. 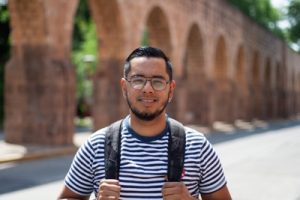 Mario Alberto Gómez-Zamora is pursuing a doctoral degree in Latin American and Latino studies because he would like to help Latinos through workshops, cultural events, activism, and research.

The 29-year-old Michoacán native was concerned about young people losing their history and he wanted to make sure young people could hear directly from elders about life in the past. The group together collected stories about the mountains, how people used to have fun and more. The stories were published in Spanish by the Universidad Michoacana and are being translated into English and P’urhépecha.

He is pursuing a doctoral degree in Latin American and Latino Studies at UC Santa Cruz because he would like to help Latinos through workshops, cultural events, activism and research. He would also like to work one day as a professor.

“I want to be an inspiration for my students,” he said. “I want to show them that this can be possible as an immigrant- that it doesn’t matter who you are – sexual identity, ethnicity and color. Now I am here.”

It was a tough road for Gómez-Zamora to get to this point as he is a first-generation college student and he had to learn English to be able to attend grad school at UC Santa Cruz. He took classes at UC Davis to prepare for the transition.

While he was raised in Mexico, Gómez-Zamora is not a newcomer to California. His parents have lived in Tracy in the Central Valley for more than a decade. His father arrived in Southern California in 1980 so he could work in auto painting.

Gómez-Zamora said that learning more about his P’urhépecha heritage, including traditional medicine and collected memories, allowed him to freely accept himself as a homosexual man—“a dual spirit.”

He loves living in California because so many people from Michoacán are here, especially in Watsonville. Many of them are from the P’urhépecha indigenous community, he said. “There are many people doing the same traditions and rituals that we are doing in Michoacán.”

He likes California’s more liberal attitudes about homosexuality. “I feel more freedom here to be myself and to recognize who I am,” he said.

He was attracted to UC Santa Cruz because it has the only Latin American and Latino studies program in the United States. He is excited about the chance to explore his interest in history, anthropology and ethnographic studies.