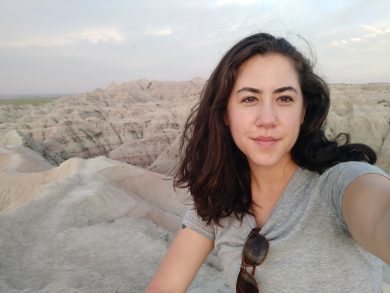 Noya Kansky is a PhD Student in the Feminist Studies Department at UC Santa Cruz researching the history and enduring legacies of settler colonialism. In 2019, Kansky was a THI Public Fellow at the Heart Mountain Interpretive Center near Cody, Wyoming. The Center sits on the site of what was once the Heart Mountain “Relocation Center”: an internment camp which held incarcerated Japanese-Americans during the Second World War. Among other things, she worked in the organization’s archive cataloging and digitizing the personal records of a former incarceree: Estelle Ishigo.

In September, THI spoke with Kansky about her research and experience as a Public Fellow. We discussed the research interests which drew her there, the experience of working in the archive, and the unexpected insights that arose while laying commemorative bricks.

Thanks for speaking with us Noya! To start, would you mind just giving us a bit of an overview of what your research interests are? How would you describe your academic work?

In my current research project, I consider how possible futures may emerge in disparate but connected settler colonial contexts, both in Palestine and among Japanese Americans in the U.S. In my research, I engage comparative methods to understand the ways that various forms of Japanese American and Palestinian cultural production indicate intersecting legacies of settler colonialism, indigenous historiographies, and survival. I am interested in examining the ways that forms of cultural production are practices of relationships to land that both frustrate and strategically move alongside popular conceptions of rights-based or state-based ideas of territory – specifically, alongside larger discourses such as “the right of return” (in the case of Palestine) or “resettlement” (in the case of Japanese America). My research has allowed me to interrogate legal frameworks in Palestine and the U.S. and the ways that marginalized bodies have had to navigate the often messy ways that these frameworks are mapped onto them. 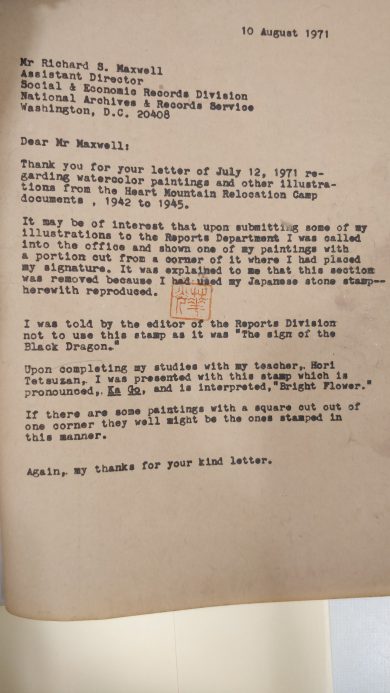 This sounds like fascinating and important research. I’m wondering how this shaped your work in Wyoming. In broad strokes, can you give us a sense of your experience as a THI Public Fellow there? What would you like us to know about the Heart Mountain Interpretive Center?

My summer in Wyoming was interesting, to say the least. The Heart Mountain Interpretive Center – which opened in 2011 – is a public museum that shares the stories, experiences, and histories of the Heart Mountain “Relocation Center.” This museum is dedicated to sharing histories of anti-Japanese racism that materialized in the production of these camps across the interior of the U.S. during the Second World War, and the ways incarceration has shaped Japanese American futures.

The center is a small space in a small town in the north of Wyoming, but functions as a consequential entrance to understanding its settler colonial surroundings. It is located on the traditional territories of the Crow, Cheyenne, and Sioux peoples. Heart Mountain – or Foretop’s Father as originally called by the Crow people – overlooks the palimpsestic landscape. The center is located north and east of Cody, Wyoming, a city that aligns its local economy to Yellowstone National Park tourism and the cultural impact of Westward Expansion and “Buffalo Bill” Cody. As you move towards the outskirts, the area most visibly carries the legacy of 20th Century Bureau of Reclamation irrigation and homesteader projects. It’s largely agricultural, and as you drive northeast of Cody, you can see repurposed internment barracks used to house homesteaders in the 1950s. The Buffalo Bill Dam, west of Cody, feeds the slow roll of the Shoshone River, providing irrigation right and left.

However, the Interpretive Center functions as a disruption in the semi-arid landscape. The homesteader and irrigation projects in concert with its World War II carceral history encourages a critical part of imagining what is called terra nullius or “nobody’s land” which in turn has been central to the dispossession of indigenous people across the world. This particular part of Wyoming was chosen as a camp location due to its isolation from populous parts of the state. At its peak, Heart Mountain Relocation camp was the 3rd largest population center in Wyoming. Japanese incarcerees were employed to continue construction on these irrigation projects and begin agricultural production. And, after the last inmates left in 1946, the former incarceration camp grounds were settled by white homesteaders (by law, Japanese Americans were not allowed).

The homesteader and irrigation projects in concert with its World War II carceral history encourages a critical part of imagining what is called terra nullius or “nobody’s land” which in turn has been central to the dispossession of indigenous people across the world.

It must have been an interesting experience thinking through this history during your time in Wyoming, especially since you were immersed directly in the culture and complexities of historical memory and representation. What were some of the projects or activities you worked on for the Center?

I primarily worked in the archive at the Heart Mountain Interpretive Center. I spent a majority of the summer sorting through and digitizing the personal documents and photos of former Heart Mountain incarceree, Estelle Ishigo. Estelle is well known as a white woman who was married to a Japanese American man, and requested to be incarcerated alongside him during the Second World War. She was hired by the War Relocation Authority (WRA) as a documentarian. The many sketches, drawings, and watercolors produced during her time spent in various carceral structures and the transits between would go on to define her legacy. Estelle was hired by the Documentary Section of the Reports Division of the WRA to document life at camp, thus rendering all of her artwork produced as property of the US government. While the WRA intended that this documentation would show the “democratizing impacts” of incarceration for the Japanese, Estelle’s representations also resist being translated as such. I was able to give a couple of public presentations about Estelle, at the museum and in town.

As I mentioned before, the museum is small, with a limited amount of staff, meaning we all pitched in where work was needed… from weeding the garden to preserving one of the original barracks. I got to help staff members prepare for their annual Pilgrimage, a three day event that brings the formerly incarcerated and their descendants back to Heart Mountain to share narratives of their experiences and open up new discussions with younger generations. 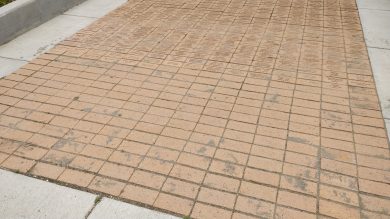 Leading up to the Pilgrimage, I scrambled in the hot Wyoming sun to lay and level donor bricks that lead to the entrance of the museum. The bricklaying, in particular, felt like a significant moment for me: for thinking about the fraught relationships between charitable funding and historical representation, the various extensions of labor that get poured into the public face of museums and the tensions with the many ways to read the archive, the unknowable experience of racialized, incarcerated labor (and particularly the ways that it historically serviced the settler colonial project) that is being revisited.

It seems clear that the time you spent at the Center was generative and produced new ways of thinking about your research and work. Looking toward the future, what did you find most valuable in your experience as a Public Fellow last year (scholarly, interpersonally, creatively, or otherwise)?

I really appreciated learning about the various dimensions of sustaining a small museum with a progressive agenda in an overwhelmingly conservative part of the U.S. It was inspiring to see the different relationships that were built with other museums in the area, and other museums across the country that also historicize Japanese incarceration.

I really appreciated learning about the various dimensions of sustaining a small museum with a progressive agenda in an overwhelmingly conservative part of the U.S.

Working in the archive presented the opportunity to further trouble popular historical narratives of incarceration. In my time in the archive, I was able to put together a few artifacts that revealed a way through which Estelle’s work remained illegible to the War Relocation Authority. In the decades after incarceration, she curated her ouevre of artwork for shows and her book Lone Heart Mountain (which the Center is re-printing forthcoming in 2020), Estelle reached out to the Head Archivist of the United States to retrieve and/or learn of the whereabouts of the artwork that she submitted to the War Relocation Authority for their quarterly reports. An assistant director at the National Archives informed her that her paintings would remain in the National Archives permanently because they held “primary research and evidential value,” and that she could pay to receive copies of her sketches and paintings. In a letter that was included in the archival collection I sorted, Estelle responded to the Assistant Director by informing him:

“It may be of interest that upon submitting some of my illustrations to the Reports Department I was called into the office and shown one of my paintings with a portion out from a corner of it where I had placed my signature. It was explained to me that this section was removed because I had used my Japanese stone stamp — herewith produced.

“I was told by the editor of the Reports Division not to use this stamp as it was ‘the sign of the Black Dragon.’

“Upon completing my studies with my teacher, Hori Tetsuzan, I was presented with this stamp which is pronounced, ‘Ka Go’ and is interpreted, ‘Bright Flower.’”

It’s interesting to think about the ways that her work had to be physically altered by the WRA. In their original form, the WRA deemed that it could not be used for their evidentiary purposes of demonstrating incarceration as a democratizing and assimilating project. Only in their altered form, would her illustrations be legible for this purpose. Moments like these offered me a different venue to continue to recognize the many ways the archives and modes of reading archives replicate settler colonial logics.