Theorizing Art and Community Across Cultures 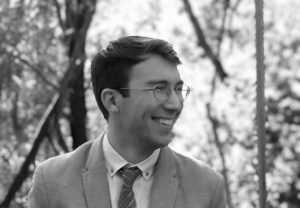 Steven Haug is a PhD Candidate in the Philosophy program at UC Santa Cruz, where he studies the Philosophy of Art. Through the support of a THI Summer Research Grant, Haug spent this summer researching and attending conferences. THI recently spoke with Haug about his research, including his work on Navajo Nation artist Jetsonorama, and the complexity of theorizing about communities other than one’s own. Haug will present new work at the UC Santa Cruz Friday Forum in January.

Congratulations on your THI Summer Research Fellowship this year! How did you utilize the grant?

I was delighted to receive support from THI! The Summer Research Fellowship allowed me to dedicate a month of the summer exclusively to my dissertation research, and helped finance presentations I gave at the American Society for Aesthetics Rocky Mountain Division (where I received the “Center for Philosophical Studies Essay Prize Award”), and the 8th annual Southwest Seminar in Continental Philosophy. At both of these events, I was able to discuss my work with other researchers in my field, as well as engage with the rich art cultures in Flagstaff and Santa Fe.

Broadly speaking, your research in the Philosophy Department at UC Santa Cruz explores the connection between art and community. You draw on European philosophers like Heidegger to investigate this relationship. If you had to describe your dissertation research to someone who’d never heard of say, the Frankfurt School, what would you say?

One of the primary focuses of my work is to expose and explain the idea that works of art have the ability to create communities. This is the idea that works of art can do more than reflect the values of individuals or a group of people. A common example of this an ancient Greek temple. These temples did not merely reflect who the Greeks were, rather—some philosophers propose—the temple organized the people in a way so that they became a community. Figuring out exactly how certain philosophers think this happens is a big part of my work.

An aspect of your dissertation research focuses on Navajo Nation artist and doctor Jetsonorama (Chip Thomas). Can you describe how you came to write about this artist? What led you to his work?

While in Flagstaff (which is not far from the Navajo Nation), Russ Pryba gave a talk during which he displayed several works by Jetsonorama. This was my first exposure to the artist’s work. After looking into Jetsonorama’s work more, I discovered interviews in which members of the Navajo Nation discussed the art. It is from these interviews that we find some of the language that is related to the idea that some philosophers have had about the relation between art and communities.

What have you learned about the Navajo Nation relationship between art and community?

I have not learned much about Navajo art besides what I can take from the interviews of the indigenous people. I try to be very careful about what I say about works from other cultures and communities. When it comes to Jetsonorama’s work, I point to his work and the relation that members of the Navajo Nation state they have with the art and suggest that it is similar to what some philosophers say about other communities and their relation to great works of art.

What is your own relationship to the Navajo Nation community? How have you navigated the complexity of writing about an indigenous US nation without being a member of that nation? Have there been ethical and identity considerations that you’ve taken into account?

From when I was about ten years old, until I was about fourteen, I lived on the Hopi Reservation, which is actually within the Navajo Nation. My father was a pharmacist on the reservation. One thing that I have taken from my time growing up on the reservation is my inability to understand, in any robust or authoritative way, the relation the people of that community have to the land and their art. I leave it to the members of the Navajo Nation to explain their relation to Jetsonorama’s work, and then point to what they state as something worth paying attention to.

The discussion of Jetsonorama’s work forces us to consider other complexities about the relation to artists and communities. The artist is from Oakland, not the Navajo Nation, and even though he has lived on the Nation for 30 years, his relation to the community is a question. This however is not an uncommon concern when we think about works of art. Take the Statue of Liberty as an example. Most think of it as an iconic American art piece, but it was made in France by a French artist. To fully work out these questions would, however, require a second dissertation at the very least. Especially given that some of Jetsonorama’s works are photographs taken by indigenous people and then enlarged and placed on the sides of buildings. It is not even very clear who the artist is in cases like these, or if it is a collaborative work of art, so I try to stick to the works of art themselves and the relation the community members state they have to that art.

What’s next for your scholarship? Where would you ideally find yourself five years from now?

Lots of plans! I will be presenting some new work at the Friday Forum in January, and plan to present at a few conferences in the spring. I have been invited to Harvard to work as a visiting PhD candidate during the fall 2019, so I plan to be there for that part of next year. I should be defending my dissertation during fall 2020, so five years from now the dream is to be on my way to having tenure at a university!