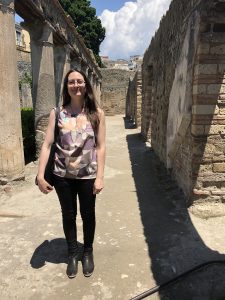 Tara Thomas is a seventh-year PhD Candidate in the Literature department at UC Santa Cruz, and a 2019 THI Summer Research Fellow. Active online, in the classroom, and in campus organizations like The Dickens Project, Thomas is a notable presence in the UC Santa Cruz community. As the fall quarter began, THI caught up with Thomas to pick her brains about her graduate school years at UCSC. We discussed the ways Thomas’ research, volunteering, teaching, and writing all inform one another,  her interest in LGBTQA+ lives in Roman imperial and Victorian-era literature, and what she did this summer.

Congratulations on receiving a 2019 THI Summer Research grant! Your research is on “queer decadent classicism.” What is that, exactly?

Thank you! I was honored to receive the Dissertation Fellowship, and really appreciate the summer support from THI. My dissertation focuses on classically-trained ‘queer’ late-Victorian authors who translated and adapted Greco-Roman myths. It hones in on the late-Victorian period in England when the identity of the ‘homosexual’ (according to Foucault) was being defined and criminalized, from around 1885 to 1901. The classics became a subcultural refuge for a lot of authors who we might understand to be LGBTQA+ today, namely because the ancient Greeks revered same-sex love.

How does your dissertation differ from existing scholarship on this topic?

I frequently describe my dissertation as “double decadence” because its focus is Roman and British imperial decadence in literature.

Much of the research that focuses on this cultural moment discusses Greek Hellenism and homosexuality, so my dissertation contributes to these discussions by examining how Roman imperial decadent culture and literature allowed the Victorians to explore not only homosexuality but other ‘non-normative’ understandings of gender and sexuality as well.

So you extend your work all the way through to the Victorian era?

Yes. By the late-Victorian period, many authors were exploring what we would understand to be LGBTQA+ lives in their translations and adaptations of the classics. It became a way of exploring past figures whose histories resonated with their own, many times more closely than contemporary understandings of gender and sexuality as fixed, static categories of identity. Queernesses explored in Roman myths like in Ovid’s Metamorphoses as well as in imperial fiction like Petronius’s Satyricon provided late-Victorians with other ‘other’ models to the institutionalized model of homosexuality provided by the ancient Greek and modern English states. I frequently describe my dissertation as “double decadence” because its focus is Roman and British imperial decadence in literature.

What work did you do on this project over the summer? 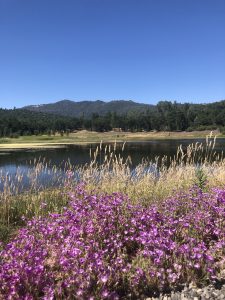 Having completed a rough draft of the dissertation, I ended up spending a lot of time this summer revising my chapters and working on the introduction. Thanks to the THI Fellowship, I was able to complete the draft of my third and final chapter, which I’m particularly proud of. This chapter focuses on a series of unpublished classically themed poems by an author called Michael Field, two women poets who were romantic partners and co-authors. I discovered these poems, which are quite remarkable as a poetic achievement, during an archival trip to the Bodleian Library in Oxford, England.

I also began revisions on another chapter on queer decadent drama, which focuses on late-Victorian plays about the decadent Roman emperors. Thinking about lyrical drama and dramatic lyrics this summer prompted me to co-organize a roundtable on “Decadent Women, Aestheticism, and Genre” for our North American Victorian Studies Association’s annual conference this fall.

You’re involved in other projects at UC Santa Cruz like The Dickens Project, where you’re a board member, and you teach literature to undergraduates. How does your research relate to your other UCSC activities?

My work with the Dickens Project has been incredibly rewarding, and has enriched my research in so many ways. I’m a board member, facilitate the local Pickwick book club, and work as a GSR on various projects like helping to copy-edit new scholarship and digitalize archives. I love being so involved in the nineteenth-century scholarly community, keeping apprised of the latest conversations and research, fundraising for scholarships, mentoring the next generation of scholars, and getting the local community involved. Through the Dickens Project conferences, I’ve met many scholars in my subfield who have mentored and given me feedback on earlier versions of my chapters, and with whom I am now collaborating with on a few projects related to my dissertation, like digitalizing the Michael Field archives at the British Library with the Victorian Lives and Letters Consortium. 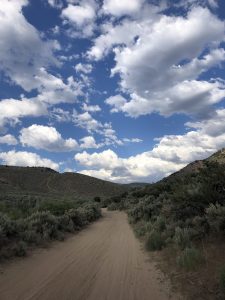 In the classroom, too, I love being able to teach students about queer theory and queer literary history, and also see them take their passion for social justice outside of the classroom and into the community. I’ve taught two courses so far, “Queer(y)ing Victorian Literature” and “Victorian Monsters,” which are both conceptually related to my dissertation. I teach much of the same queer theory and sexological essays that I discuss in the dissertation, so teaching becomes an opportunity to understand those texts and my own critical interventions more thoroughly. I also have students help transcribe the unpublished Michael Field poems I’m working on editing for an online digital archive, so we get to work together transcribing, close-reading, and annotating them. It’s a great opportunity to share my expertise with students and allow them to produce scholarship. Even though dissertation writing is a solo activity in the humanities, I love exploring opportunities for collaborative scholarship inside and outside of the classroom.

You’re now a seventh-year PhD Candidate at UC Santa Cruz. What are your professional and personal goals at this stage in your graduate career?

I came to UC Santa Cruz with a degree in English (emphasis in Education as well as English and Spanish literature) knowing that I wanted to work in the classroom. I have always been passionate about teaching and research, yet my work with The Dickens Project has made me discover I also enjoy working with humanities-oriented nonprofits and other organizations. I am now exploring both academic and academic-adjacent possibilities after graduation. I’ve also been discussing a new Santa Cruz community education program with The Dickens Project that we’re hoping to kick off in the near future. Using the Dickens Project-sponsored USC Neighborhood Academic Initiative as a model, this program collaborates with Santa Cruz County educators and students to promote nineteenth-century literature and writing in the local community.

Tara Thomas is a member of THI’s 2019 cohort of Fellows. Read about our funding opportunities for graduate students here.