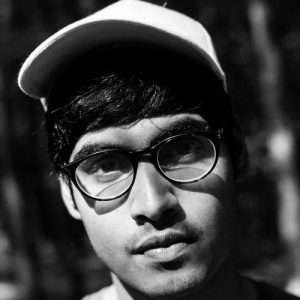 The deep theoretical and experimental focus on understudied languages was a major factor in Vishal Arvindam’s decision to pursue a doctoral degree at UC Santa Cruz.

The faculty’s community-centered pioneering field psycholinguistic work into Chamorro, Zapotec, and other languages particularly stood out to him. Arvindam said it is imperative for linguists to conduct such work in a manner that gives back and benefits the language community at large.

Arvindam earned his bachelor’s degree in linguistics and psychology from the University of Massachusetts, Amherst and spent a year as the lab manager of the Child Language Lab at New York University before he arrived at UC Santa Cruz in the fall.

“I was captivated by what linguistics has to offer to the study of the human mind and this seemed like the logical next step,” he said “I have a lot to gain from the department and other graduate students. It’s the community I came for.”

Arvindam is particularly interested in psycholinguistics, the study of how humans acquire, use, and understand language. Much research has been done on the world’s major languages, with others left unstudied.

“It’s a very narrow slice of the world’s languages,” Arvindam said. “If we want to make claims about how the mind works we need to be more expansive.”

He’s particularly interested in studying Dravidian languages—those spoken by more than 200 million people in South India and Sri Lanka-and expects to conduct psycholinguistic fieldwork in the area as he progresses along in his studies.

After he earns his doctoral degree, Arvindam hopes to become a professor so that he can teach and inspire students who are fascinated by linguistics and the mystery of the human mind.