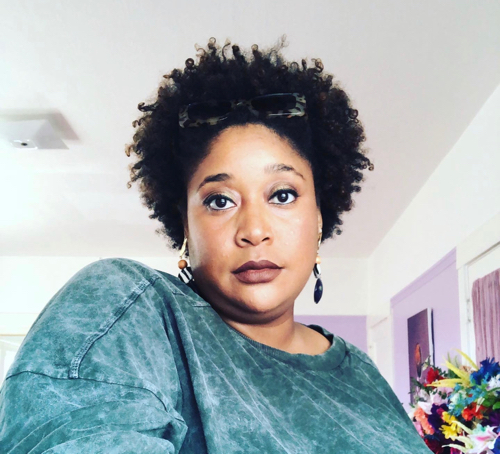 Mia Boykin’s debut collection of poems, The Monument of Misremeberings, was published in 2020 with Co-Conspirator Press and it follows her debut album, called Rough Diamond, which was released in 2019.

“Pride is a riot,” says Mia Boykin. “It is a political stance against the policing of Black and brown trans bodies. It’s not the superficial celebration or the corporatism you see in these businesses and cultures that look to capitalize on this movement.”

Mia Boykin is a doctoral student working toward obtaining a Creative/Critical Ph.D. in Literature at UC Santa Cruz. Boykin, who is also known by her nom de plume Mimi Tempestt, is a multi-media artist and poet, who created an archival interview series called Black.Queer.Alive.

“The project started as an oral history that focused on interviewing as many of the Black and queer people across the diaspora as possible,” she says.

The next phase of her endeavor will intersect with a summer fellowship at the TG/ENBY Project in Los Angeles to create Black.Queer.Alive. Summer 2021 Community Workshops, which will be on the last Sunday of each of the summer months beginning in June and running through September. Due to COVID–19 considerations, the workshops will be held remotely via Zoom.

TG/ENBY is a trans fitness initiative aimed at making exercise more accessible to nonbinary people, and while one of the workshops Boykin will host focuses exclusively on fitness for queer individuals, she is also expanding the offerings to include subjects like creativity, politics and entrepreneurship.

“It’s a series that seeks to break negative patterns embedded in the narrative that typically gets told about Black and queer people,” Boykin says.

The first two-hour workshop begins at 1 p.m PST on June 27 and will be led by Madison McCartha, Boykin’s fellow student at the Creative/Critical PhD. program at UC Santa Cruz and whose work as a poet, critic and visual artist has received widespread acclaim.

McCartha’s workshop is called “Breaking the Aperture” and will focus on the overarching features Black and queer experience.

The second workshop, in July, will feature Olka Beldah, who is slated to lead a program called “Yoga for the Queer Expanse.” Beldah, a prolific poet, podcaster and activist, has long incorporated concepts of yoga into a space that explores the lingering health effects on Black Americans victimized by police brutality and other effects of systemic racism.

“The workshop will discuss healing through breathing techniques and tantric exercises as well as other ways to focus on our bodies,” Boykin says.

The July workshop is the most explicit example of Boykin’s work dovetailing with that of TG/ENBY, but August’s speaker, Raihana Haynes-Venerable, will also provide a relevant disquisition on the intersection of queerness and Blackness. Haynes-Venerable is also a poet and doubles as a photographer and speaker on the queer Black experience and how it interacts with institutions around the subjects of patriotism and race.

“It’s about politicizing and radicalizing our ideas in different ways,” Boykin says.

The final workshop is slated to be held online at 1 p.m. (PST) on Sunday, Sept. 26 and will feature Marcel Hill. Hill advocates for entrepreneurial approaches to self-empowerment and will discuss how he constructed his business called Phew!Beauty – a handcrafted natural skincare brand based in Los Angeles.

Boykin says it will be important for younger people to hear how Hill transformed his passion into a viable business that affords him the independence and assurance to be an effective advocate for a gamut of issues pertinent to the Black experience in America.

“I’m fortunate to be in community with these amazing people who bring all these talents and perspectives, are Black and queer and ready to share their knowledge,” Boykin says.

She says the workshops will be focused on Black and queer experiences, but are also open to anyone who would like to participate.

“It’s about creating space for people who aren’t seen, for people who may not have access to the resources, information, knowledge and experience,” she says. “It could be the community college kid or really just anyone who isn’t sure what their politic is. If you are curious about what it means to be Black and queer, come to the workshop.”

Boykin has been wrestling with these questions since growing up in Los Angeles. She considers herself a daughter of California but quickly glommed on to the underground currents that facilitated an intellectual fermentation around the issues she found herself concerned with in her youth.

“I encountered these concepts in the underground,” she says. “The academy just provided a language for what I already saw happening all around.”

Her debut collection of poems, The Monument of Misremeberings, was published in 2020 with Co-Conspirator Press and it follows her debut album, called Rough Diamond, which was released in 2019. Boykin hopes that her workshop can serve as a catalyst for other similarly situated people looking to jumpstart their careers, explore questions surrounding their own or others’ identity or contextualize their experience.

“I wish a million people could have this opportunity,” Boykin says. “It isn’t just about me having this Black queer life, but about people relentlessly exploring the opportunity within themselves.”

More information about the Black.Queer.Alive. Summer 2021 Community Workshops, including regisration, is available online.