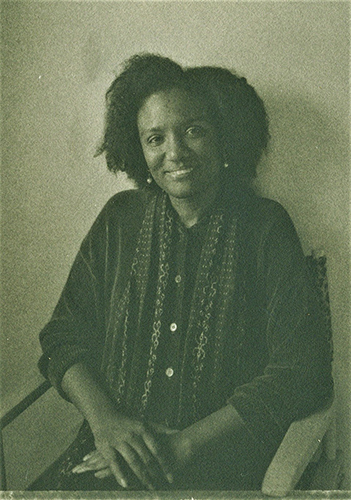 “I was already a published poet when I got to Santa Cruz,” Mullen said. “But I didn’t lose my connection to that poet self because UC Santa Cruz allowed me the space to develop intellectually as both a poet and a scholar.”

Mullen published her first poetry book Tree Tall Women in 1981, written while attending the University of Texas, Austin, where she received her undergraduate degree. She has since published dozens of poems, stories, books, and essays worldwide. Her work has been reprinted in over one hundred anthologies. She is the recipient of dozens of fellowships and has received numerous prestigious awards, such as the PEN Beyond Margins Award, the Elizabeth Agee Prize, the U.S. Artist Fellowship, the Jackson Poetry Prize, and the Academy of American Poets Fellowship. Her book, Sleeping with the Dictionary, was a finalist for the National Book Award, the National Book Critics Award, and the Los Angeles Times Book Prize.

When Mullen arrived in Santa Cruz as a student, she had less than $100 to her name and found herself navigating a tumultuous housing market. bell hooks introduced Mullen to Roz Spafford, who rented a garage to Mullen.

While pursuing her Ph.D, Mullen worked in writing programs directed by Spafford; as a TA for professor emerita Michelle Cliff, and as a reader for bell hooks in women’s studies courses. When bell hooks published her first book, Ain’t I a Woman, in 1981, Mullen wrote a book review for a local paper at the time, The Santa Cruz Express. In addition to her TA roles, Mullen also worked in graduate admissions, the EOP Summer Bridge Program, and the Women’s Reentry Writing Program to support herself financially. John Lynch hired her as a graduate resident at Cowell.

“I was working for a living, and I wanted something related to what I was trying to become—a teacher, a scholar—and I wanted to stay close to the university community,” Mullen said. “All of those jobs showed me different facets of the university.”

Her Ph.D. dissertation examined fugitive slave narratives as literary texts focusing on the writings of Frederick Douglass and Harriett Jacobs.

“All of that was very exciting; it was not always clear in a Literature Department or an English department at the time that these texts could count as literature,” Mullen said. “So I was very excited to write about them not just as historical texts, but also as literary texts.”

After earning her M.A. in Literature in 1986, and while writing a dissertation for a Ph.D. in Literature in 1990, Mullen pursued a fellowship with the Center for Black Studies at UC Santa Barbara. From there, she was hired to teach at Cornell University. She spent a year on leave as a Rockefeller Fellow at the University of Rochester’s Susan B. Anthony Center.

Currently, Mullen serves as a professor of English at the University of California Los Angeles (UCLA). She has taught numerous creative writing courses and courses in American and African American literature. While a professor at UCLA, Mullen continues to work as a creative artist. She recently published a short story in Indiana Review and a collage art series in Air/Light Magazine. Edinburgh University Press will publish a critical edition of her poetry in fall 2022.

“At UCLA, I am blessed with brilliant colleagues in a department that encourages interdisciplinary study and innovation,” Mullen said.

Harryette Mullen can’t remember a time when she wasn’t writing poetry. When she was younger, though, her writing came in different forms—short songs, humorous verses and comic books, stories for friends, greeting cards for holidays.

“The university felt like a utopian space,” Mullen said. “It was not like the community where we lived; it was different. There were precious resources that we did not have in our community, so I think I was drawn to the university as an attainable paradise where books on every subject were available all the time.”

Later, Mullen, her sister, and their mother all enrolled at the University of Texas, Austin⁠—their mother was pursuing her Ph.D. while Mullen and her sister were undergraduates.

Mullen published her first poetry book Tree Tall Women in 1981 and embarked on a book tour that led her from Texas through New Mexico to California. She read in Berkeley at an event organized by Ishmael Reed, at the L.A. Watts Towers, and in Bookshop Santa Cruz. It wasn’t until she was enrolled as a Ph.D. student at UC Santa Cruz that she recognized Santa Cruz as a stop on her book tour.

“Pacific Avenue looked like a hippie museum,” Mullen recalled. “I suddenly remembered that I’d been here before, on that poetry tour from Texas to California for my first book. Apparently one of the places that I read was Santa Cruz because I definitely had deja vu when I saw those hippies on the mall.”