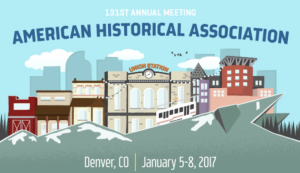 Historians are often asked to make sense of the present using their knowledge of the past. So it’s no surprise that Donald Trump was discussed at numerous sessions here last week and over the weekend at the annual meeting of the American Historical Association. Beyond informal mentions across a variety of panels, Trump-related plenaries bookended the conference. In between was a lively debate about the role of historians in political debates.

Tyler Stovall, distinguished professor of history and dean of humanities at the University of California, Santa Cruz, and incoming president of the AHA, added to Ruiz’s assessment by linking Trump’s victory to simultaneous working-class populist and racist protests. The combination is not at all unusual in American history, he said, but is particularly salient now.

Such trends are also apparent in Europe, perhaps best evidenced by the United Kingdom’s recent vote to leave the European Union. “What you see is the decline, really the abandonment, of the center left in Western politics. This is a group that really rose to prominence after [World War II] and the creation of the welfare state, but it has not been able to maintain its integrity and basic organization in the face of the neocapitalist resurgence,” Stovall said.

Still, Stovall cautioned that it’s probably premature to guess what Trump’s rise means for history. Quoting the former Chinese Premier Zhou Enlai commenting on the lessons of the French Revolution more than 150 years after it took place, he said, “It’s too early to tell.”