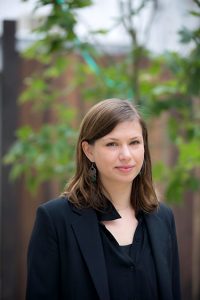 Assistant professor of history and Jewish Studies Alma Rachel Heckman has been appointed as the new holder of the Neufeld-Levin Holocaust Endowed Chair at UC Santa Cruz.

The interdisciplinary endowed chair was established in 1995 by Anne Neufeld-Levin, a former president of the UC Santa Cruz Foundation Board of Trustees, to support teaching, research, and public service related to the Holocaust, including its circumstances and continuing implications.

In establishing the chair, Neufeld-Levin noted:

“I feel compelled to help keep alive my legacy from the Holocaust surrounding World War II. My parents and I were on a train March 13, 1939, emigrating from Vienna, Austria, to the United States at the exact same moment Hitler’s troops invaded Czechoslovakia. A miracle separated my escaping alive from the eventual annihilation of my grandparents, aunts, and six million other Jews. As a result, I believe it is critical to perpetually study the circumstances culminating in Hitler’s final solution for Jews. Only by remembering can we immortalize the millions of victims and help prevent a similar onslaught against any group.”