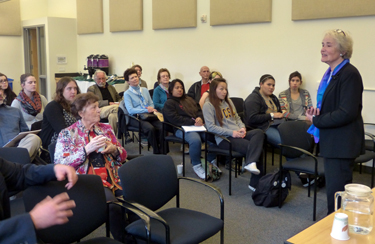 Following her father’s arrest by the Nazis in 1942, six-year-old Hedwig Rose, her mother, and sister spent three years hidden in an Amsterdam cellar by a Christian friend until the country was liberated on May 5, 1945.

Today Rose is a well-known speaker, a frequent visiting scholar at Stanford University’s Hoover Institution, a faculty member of the Global Citizenship Program at the Salzburg Global Seminar, and the author of Freedom and Restraint in the Lives of American Teachers.

She is also currently working on a book titled Living the Life of Anne Frank: A Childhood in Hiding.

On Thursday, January 21, Rose will give a free public talk at the Music Center Recital Hall on the UC Santa Cruz campus, beginning at 7 p.m.

She will speak about her experiences as a child in Amsterdam during Nazi Germany’s invasion and occupation of The Netherlands. The title of her talk is: “My Childhood in Hiding: Amsterdam, 1942-1945.”